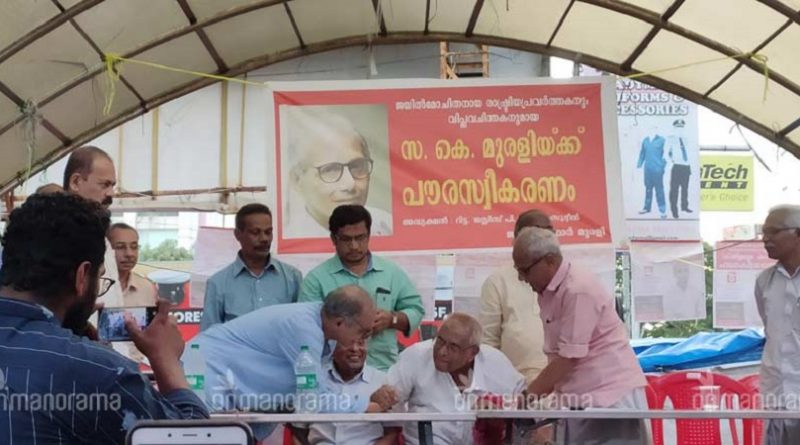 A reception accorded to Maoist leader Murali Kannampilly in Kerala’s Kochi on Sunday turned out to be a convergence of rights activists, both supporting and opposing his radical left movement.

The event – organised by Justice for Murali Collective – was Murali’s first public event after he walked out of Yerwada Central Jail in Pune on July 23, four years after he was arrested. His arrest had drawn global attention with thinkers, such as Noam Chomski, Judith Buttler and Gayatri Spivak and Partha Chatterjee, among others, joining the campaign for his release.

Speaking at the meeting at Vanchi Square near Kerala High Court, Murali observed that an undeclared emergency is on in the country and wondered why people are not protesting against it though the country had a previous experience in 1975. “The continuing lock down of Jammu and Kashmir following the abrogation of Article 370 is an example of the undeclared emergency,” he said.

Murali said there is a feeling in society that human rights are not meant for all. ‘At the jail (in Yerwada)’, he recounted, ‘even my fellow prisoners criticised me for stopping policemen from beating convicts.’

Muralidharan too was a victim of human rights violation during his jail term. Authorities denied him medical care for chest pain in 2016 and 2018, forcing several intellectuals across the globe to raise concerns about his health condition. Chomsky, one of the intellectuals, had even demanded that the jailed rebel be given a fair, transparent and speedy trial or be set free.

Muralidharan is the son of former diplomat Kannampilly Karunakara Menon, who served as a counsellor at the Indian Embassy in China from 1958 to 1961. He began associating with radical leftist groups while studying civil engineering at the erstwhile Regional Engineering College (now National Institute of Technology) in Kozhikode. In February 1976, he was named as an accused in the Naxal attack on Kayanna police station, but was acquitted along with all the other accused. His colleague P Rajan, however, was arrested by the police and tortured to death.

Muralidharan became the secretary of the Central Reorganisation Committee of the Communist Party of India (Marxist-Leninist), which was formed in 1979. He became the secretary of the new party after it merged with the Communist Party of India (Maoist) in May 2014.
He was working underground until his arrest in 2015. During this time, he edited A World to Win, a magazine published by Revolutionary International Movement, a forum to coordinate Maoist movements across the globe. He also wrote what is considered a seminal book on land reforms, and caste and agrarian relations in Kerala, titled Land, Caste and Servitude.

Muralidharan, also known as Murali Kannampilly or by his nom de guerre Ajith, was arrested on May 8, 2015 while he was being treated in a hospital in Talegaon Dhabada, about 30 km from Pune. He was charged under the Unlawful Activities Prevention Act for being associated with the banned Communist Party of India (Maoist) as well as under penal provisions related to forging, carrying and using “security documents”.

On Sunday, Murali said the ruling party was peddling a fake sense of nationalism using religion as a cover. “There’s an argument that those who support Hindutva are nationalist and the rest are anti-nationals. No nationalism that is anti-imperialist is possible in India,” he said.

Murali did not conceal his conviction about the Maoist idea of armed revolution. He said he did not believe that social revolution is possible in a peaceful manner. “However, the current social milieu calls for the unity of democratic movements despite their differences. Multiple movements can come together despite their differences. It’s the need of the hour,” he said.

He lauded the courage of the people who had gathered at the function saying they could all be easily branded as terrorists now with the latest amendments to the UAPA Act.

Justice (retired) P K Shamsudheen, who chaired the meet, said he worked for Murali’s release despite opposing his political ideology, because it was a human rights issue. Hailing Murali as a great thinker and writer, he said he did not think that Murali will engage in any terror activity. “India needs another revolution to fulfil Gandhi’s idea of freedom, but bloodshed should not be its means,” he said.

Former MP Sebastian Paul said the meeting was not only for Murali, but for many who languish in jails across the country without trial.

CPM veteran MM Lawrence called for the unity of left parties even as criticising Maoists’ idea of armed revolution.