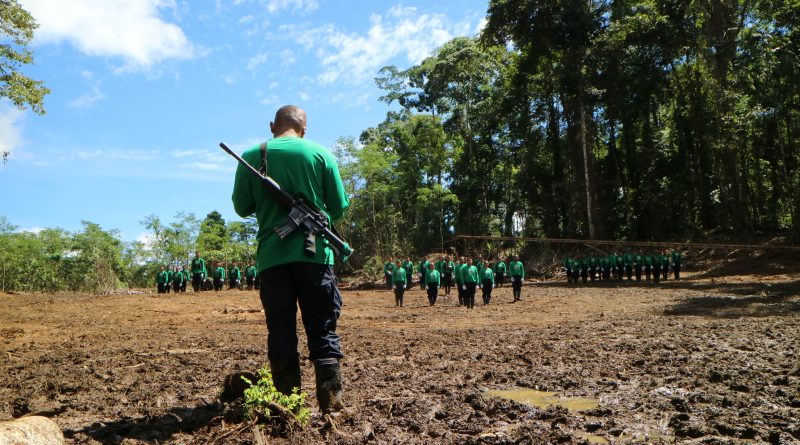 The ambush was launched in response to the people’s hopes to grant justice for peasants and civilians who fell victim to massacres and extra-judicial killings (EJK) in Negros perpetrated by the fascist AFP and its paramilitary forces under the US-Duterte regime’s Memorandum Order 32 or de facto Martial Law.

The AFP’s 303rd Brigade declared that only three (3) soldiers were “slightly wounded” in the ambush. But it is obvious that the fascist soldiers instantly incurred heavy casualties after the NPA attacked with command-detonated explosives (CDeX).

The clash lasted for only about 15 minutes, while the soldiers continued indiscriminate firing in the area. The RJPC unit promptly and safely withdrew from the area.

The NPA did not violate any war protocol in the use of CDeX. Its explosions are controlled and the RJPC made sure that it would hit only combatants. Meanwhile, the 79th IB earned more casualties due to machine gun fire coming from their own ranks which they aimed at the ambush site even if their own wounded troopers were in their sector of fire.

The desperation of the 79th IB caused the heavy casualties in their ranks. They peppered their own fallen soldiers with bullets to prevent the NPA from confiscating their firearms. To avert further embarrasment, they sacrificed the lives of their own troopers some of whom possibly needed only first aid. At least ten (10) AFP soldiers were killed in action and many others were wounded.

This encounter transpired due to the 79th IB’s crazed chase to score points against the NPA. In the course of this violent campaign, mostly civilians have become the targets of their fake surrenders, illegal arrests and political killings. The 79th IB wants to make it appear that they enjoy the support of the people and that civilians voluntarily gave them information against the NPA. The truth: it was their own equally mercenary and greedy spies and local intelligence assets who led them to this humiliating combat defeat.

The AFP’s so-called “peace and development team” or PDT occupied Barangay Paitan for nearly a year and during this time, the army accomplished nothing but to disrupt the lives and livelihood of the people. The company-sized combat operations and heavy military presence in Escalante barangays have clearly caused harm to the people, prompting hundreds of families to evacuate to the village proper to ensure their safety. Reinforcements from the 11th IB were also airlifted via helicopters.

The Red commanders and fighters of the people fearlessly engaged the fascist soldiers for the enemy’s so-called all-spectrum dominance and superiority cannot intimidate the NPA. The NPA is ever-ready and determined to defend the broad masses of the oppressed and exploited notwithstanding the excessive parade of drones, helicopters and waste of goverment resources to fund local intelligence assets, fake surrenderees, coercive mass meetings in barangays, fascist propaganda in local radio programs and other such cheap stunts.

These desperate and embarrassing stunts of the AFP and its brazen violation of the rights of peasants and civilians provide impetus to the people and ordinary folk to grasp the revolutionary cause and seek refuge in the people’s revolutionary government.
The RJPC-NPA sincerely calls on the broad masses of the people especially the toiling class of workers and peasants to continue the struggle and fearlessly stand for their rights. Your Red army is here, ready and determined to serve the people and break the chains of oppression to end the country’s semi-colonial and semi-feudal ruling system.

We dare the troopers of the reactionary government particularly the low-rank officers and ordinary soldiers used as pawns in combat operations to live up to your vow to serve the people. Defy the rotten policy of this unjust war against the people, the corruption within your ranks and the criminal activities.

The rich history of the people’s struggle against Martial Law especially here in Escalante provides the revolutionary movement with boundless inspiration to frustrate MO 32 in Negros and the brutal counter-revolutionary war of the fascist US-Duterte regime.