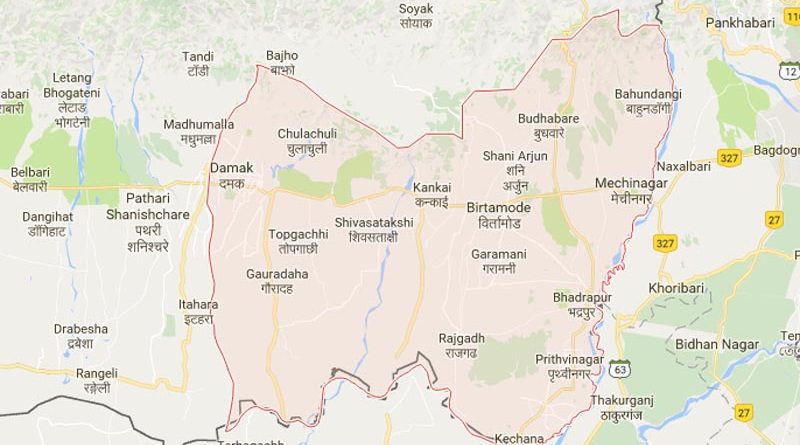 There are reports of two separate blasts in Jhapa last night carried out by the Netra Bikram Chand-led Communist Party of Nepal.

According to Anarmani Area Police Office DSP Mohan Thapa, a powerful pressure cooker bomb went off at Sahara Nepal Cooperatives in Charpane of Birtamod Municipality at midnight. The main gate of the cooperative and its guard room were damaged in the blast, while the window panes of the cooperative building were shattered.

Upon sighting a suspicious object, security guards at the cooperative had reported to the police. “We reached the site and called an NA bomb disposal team, but the bomb went off before the disposal team arrived at the site,” said the DSP.

In Gauradaha, the blast occurred on the premises of Gauradaha Municipality Office at midnight. According to Jhapa District Police Office DSP Mahendra Kumar Shrestha, a scorpio jeep used by the chief administrative officer at the municipality was completely damaged in the explosion.

According to police, investigation into the explosions is under way. Chand-led CPN Jhapa secretary Manish has taken responsibility for both the blasts on behalf of the party. “The blast in Gauradaha was intended to teach a lesson to the local representatives and staff who have put their luxury ahead of development, by splurging millions of rupees on luxurious vehicles,” he said.

“Regarding the blast at the cooperative, it was a warning to the cooperative, whose owners are getting fatter and fatter day by day by using the money of the common people,” he said, vowing to continue its action against cooperatives that are only for benefiting their owners at the expense of the commoners and depositors.