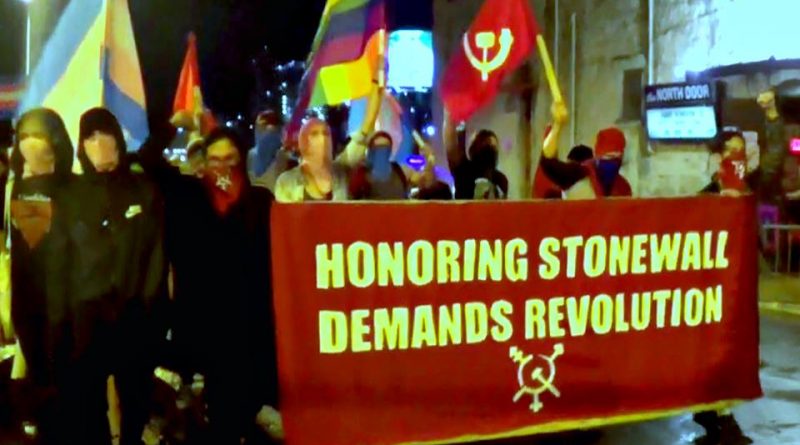 This year for Queerbomb, RATPAC called for a Stonewall Contingent to kick off our Month of Stonewall series of events. Our unifying message for everything we do this June is that Stonewall was a violent rebellion against the police. It was not just a riot. It was not just an expression of anger or queerness or transness. It was serious and successful resistance against the state: a win for LGBT people and a loss for our oppressors, and it emboldened others across the country to use the same tactics. We say that’s what was good about Stonewall—that is the most important part of its legacy. The violence of police arresting queer and trans people for expressing themselves was only stopped through the violence of resisting arrest and hitting back. Nothing less would have stopped the pigs. Any less and the same anti-cross-dressing laws from back then might still be around today. Spontaneous violence like the Stonewall Rebellion can temporarily weaken the forces of oppression, but organized, persistent violence—revolution—is the only thing that can stand up to the organized and armed forces of the patriarchal and racist capitalist system and destroy it, and therefore the only thing that can bring a full end to LGBT oppression.

At the time of Stonewall and for decades after, many revolutionary organizers turned a blind eye to the LGBT community. People were left to decide for themselves how to move forward. Many of those people did choose to be confrontational and militant to different degrees in the vein of Stonewall, but no group has been willing and able to lead the people to a long-term strategy and a revolutionary outlook for LGBT liberation. The Democratic Party and their cronies have worked for decades to quell the fires of gay and trans outrage, and groups born out of a rebellious spirit have either disappeared or turned into instruments of piecemeal reformism and election campaigns. Pride marches started as political protests celebrating the Stonewall Rebellion, but they have devolved into gratuitous collaborations with corporations and the state that beats, jails, and murders LGBT people daily, complete with rainbow police cruisers and Budweiser sponsorships.

Queerbomb started eight years ago with the idea to stand against modern-day Pride, because Pride today is more concerned with a sterilized image of LGBT people and corporate sponsorships than a true expression of the masses of queer folks. Pride only helps the few rich gay and trans folks that have a hand in controlling and profiting from the oppressive capitalist system. It’s very important to stand against it, but we believe Queerbomb’s strategy and tactics fall short. It’s good that it isn’t festering with corporate sponsorships, that it allows for the full rainbow of expressions of LGBT people in Austin, and that it is run by very dedicated community members, but it still lacks militancy. It lacks the rebellious politics, actions, and long-term vision that can truly free LGBT people. It lacks revolution. Queerbomb pays the cops and runs like a party with left-leaning politics, and we believe that is in no way a full departure from Pride. It only turns the clock back to a time before Pride was so fully absorbed into the capitalist system, before it was so committed to the interests of wealthy gay and trans people who profit heavily from patriarchy even as it harms them.

As outlined in its manifesto, Queerbomb believes in creating a better world for LGBT people. Through its procession, it offers a place for people to transgress the boundaries of what society and Austin Pride view as acceptable for queer expression, but it doesn’t provide a long-term solution to the problems that created modern-day Pride in the first place. It’s a day where Austin queerness is visible and loud, but not a day that grows our people’s political power. This year, that was perfectly shown by the procession. Some rain and lightning led to the cops to delay the procession for over a half hour and cut its timeframe and distance to less than half of what was planned. We should make the decisions of how and when to march and express ourselves completely independently of what the pigs have to say. We shouldn’t let them control us and cut our march short for their sake.

We have to build ways of organizing ourselves that have never been tried by LGBT people in the US before. We’ve tried the nonviolent route, the visibility route, the expression route for decades, and we’re closer to fascism than freedom for LGBT people. Fascists are enabled by the capitalist system. We need the city and the rest of the government to be afraid of us because that’s the only way we have a fighting chance to gain true freedom. The rebels at the Stonewall Inn understood that. The only thing that can change the world is power, and we will only get it by harming profits and waging war against our oppressors. In June 2018, instead of taking the streets within the confines of what the city and their pigs will tolerate, let’s ditch the cops and show the city a taste of our power!