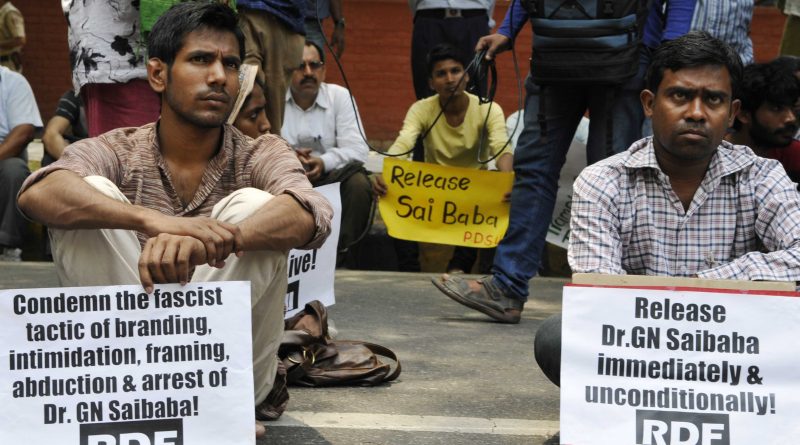 A delegation headed by Delhi University professor G N Saibaba’s wife, Vasantha Kumari, on Thursday sought the intervention of the National Human Rights Commission to ensure proper medical care for the jailed academic. The condition of Saibaba, currently lodged in the Anda Cell of the Nagpur Central Jail, was “deteriorating day by day”, the delegation told the NHRC. He was unable to urinate and his stomach pain had increased, Kumari said in a letter submitted to the NHRC at New Delhi.

Saibaba was sentenced to life along with five others for links with Maoists under the Unlawful Activities Prevention Act (UAPA) in March.

“It is a matter of grave concern that the health condition of Saibaba is deteriorating day by day. Before his arrest, Saibaba was undergoing treatment at Rockland Hospital in the national capital,” the letter said.

The doctors there had advised surgery for the removal of his gall bladder, it said.

“It has been over 10 weeks since his arrest on March 7 and the jail authorities are not providing him with any medical care,” Kumari alleged.

Delhi University Teachers’ Union president Nandita Narain, activist Kalyani Menon Sen and the secretary of the National Platform for the Rights of the Disabled, Muralidharan, were a part of the delegation.

The delegation also called for immediate intervention on the ground that India was a signatory to the International Covenant on Civil and Political Rights (ICCPR), the UN Convention on the Rights of Persons with Disabilities (UNCRPD) and UN Resolution 70/175 on Standard Minimum Rules for the Treatment of Prisoners.

“Saibaba is a person with disability. The UNCRPD, which India also ratified, as well as the recently passed Rights of Persons with Disabilities Act, 2016 (RPD Act), which was enacted to fulfil India’s obligations under the aforementioned convention, are wholly applicable to his case,” the letter said.