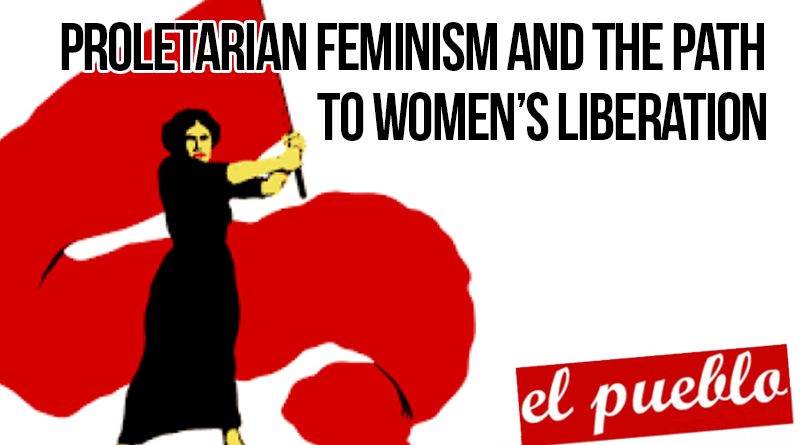 By the Popular Women’s Movement (MFP) Committee
Published in the printed edition n° 67 of the periodical El Pueblo, March 2018.

Women of the popular classes are an important part of the rise of the struggle of the masses. Today in the heart of women’s organizations a struggle is beginning between proletarian feminism and bourgeois feminism. Mothers, wives, workers, fighters, are searching for a path, therefore it is of utmost importance that it be the ideology of the working class which guides their endeavors.

The idea of woman, a reflection of politics and economics

In every society, the predominant ideas reflect the economic and political base that sustain that society. These ideas are transmitted primarily through education and the media. Therefore, ideas around women also become detached from that base. In our country, capitalism is backward and has semifeudal foundations, thus the ideology and conception of women’s role is backward and feudal. In other words, historically reactionary and patriarchal.

From there we understand that the idea of women as inferior to men did not fall from the sky. Neither did it arise with capitalism, rather, it is much older, in fact, it was born as a product of the emergence of class society and private property, centuries ago. Because of this, women’s oppression can only disappear in communist society, where private property no longer exists in the means of production.

In Chile, although they want to depict a “modern” country, we women are politically, economically, and culturally undervalued. The miserable conditions of life that bureaucratic capitalism (capitalism which is backward and submitted to foreign capital) imposes, fall most heavily on women of the popular classes.

Proletarian feminism explains that the woman of the popular classes is exploited and oppressed, first, for being part of the people, and secondarily, for being a woman. In other words, she suffers oppression based on class and sex. Because of that, not all women find themselves in the same trench, because there also exist women who exploit the people, pertaining to the monopoly and usurer classes of our country.

On the other side, we have women of the popular classes, who constitute the immense majority: workers, peasants, temporary workers, domestic employees, migrants, small traders, students, intellectuals and professionals, etc. All of them, in addition to working in productive gainful employment, work in the home raising children and supporting the family without payment. It is also these women of the popular classes who are the strongest in the face of adversity when they fight for housing, for wages in the strike, or the right to education. The highest example of valiance and bravery are the Mapuche women in their struggle for land and survival as a people.

Bourgeois and petit-bourgeois feminism deal with the problem primarily from a cultural point of view, decoupling it from its political and economic base. And even worse, they propose an individualist path of liberation, which will never conquer rights for women, because as we have indicated, the origins of women’s oppression are in the social relations of production. And because of that, we must fight to transform them, destroying the old State that defends them, adhering ourselves to the struggle for New Democratic Revolution.

Within the views that divide us as a people, there are the more recalcitrant positions, which affirm that the problem is that men “are bad,” while others claim that women’s liberation would be associated almost exclusively with sexual liberty and even with social advancement, centering on competing with men. At the same time, out of a lack of understanding of the material and class base, petit-bourgeois feminism looks for the solution to the problem of double oppression in an individual liberation: “my body, my choice,” “I liberate myself,” and not in the collective struggle against class and sex oppression by women of the popular classes together with their male counterparts.

The idea that we can sweep away male chauvinism through individual liberation is an illusion, seeing as the root of the problem is found in the political and economic base of our society. Only by changing this will we be able to sweep away the male chauvinism which is characteristic of patriarchy. Consequently, all steps toward uniting women to the struggle and combating male chauvinism at the same time are an advance in this sense. In turn, it is the men of the people who actively unite with the struggle that go about combating the male chauvinist ideas in which they have been educated, advancing together with their female counterparts.

We salute the women of the popular classes who are organizing themselves, who are daring to march, debate, and search for the path to liberation. We salute their vigorous momentum, as demonstrated in the days of mobilization and in their day-to-day struggles. Brave women of the popular classes who advance their class position, opposing every form of oppression and exploitation, lifting their head to struggle against the abuses and violence exerted against them, just as a growing number of male counterparts are doing.

Unleash the revolutionary fury of women!