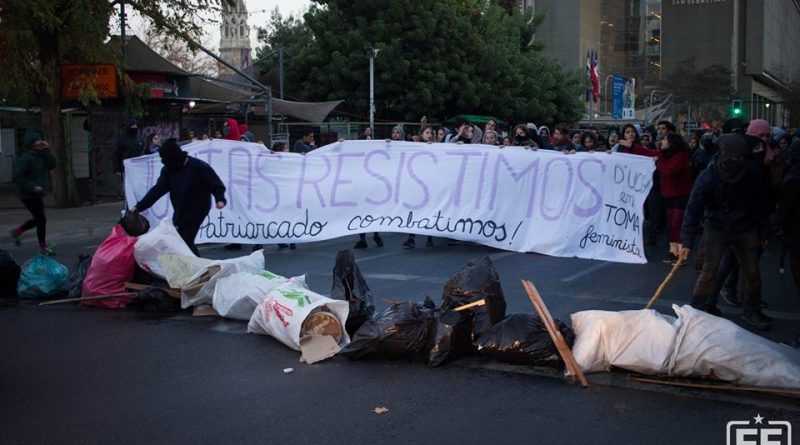 More than thirty educational establishments ranging from high schools to universities, are occupied or on strike at the close of this edition. These mobilizations are directed by organized women with a high willingness to fight and overwhelm. The women’s student movement is undoubtedly a reflection of the development of the class struggle, since on a global and national level the masses rise up against what they consider unjust, and they know that only with struggle can they conquer their rights.

Thousands of students feel called to oppose the patriarchy. They have had to face fears, the reproach of some sectors and the criticisms of certain hypocritical conservatives who focus on the nudes and not on their just demands.

In the marches and mobilizations, we see, through their declarations, canvases and slogans, that progress is made in understanding the relationship between patriarchy and an economy in decomposition and subservient to monopolies. We feel the duty to point to the origin of oppression of women, explaining that the emergence of private ownership of the means of production created the historical conditions to relegate popular women to a secondary, subordinated and doubly oppressed place. Therefore, the revolutionary fury of women must be part of the great torrent of popular anger that is unfolding to end class society.

The feminist movement, like all mass movements, has a left wing and a right wing:

On the left we find all the comrades who seek to be guided by a line of class at the service of the people, who are moved by the situation of women who live in a heavier patriarchal oppression and seek the path to join them in the struggle, because they know that not all women can fight in the same trench. Among their enemies they mention Bachelet and how her hands are stained with working-class, Mapuche and popular women’s and children’s blood. This sector also demarcates with the government and the old State and promotes combative actions to conquer their demands.

To the right of the movement is opportunism, which seeks to divert the struggle along the bureaucratic, pacifist, legalistic and class-conciliationist path, leaving intact the system on which patriarchy unfolds. Instead of pushing forward the struggle, they want all energy to be oriented only towards achieving protocols against abuses, which without organization and mobilization, will end up not being applied.

Some lessons that the feminine struggle is leaving

When covering the feminist march, the monopoly media seems sympathetic, but on May 16, when referring to the massive march, they tried to isolate the combatant comrades from the rest of the demonstration. For example, a journalist pointed out that there are “groups trying to taint this manifestation”. What is it for them to stain the manifestation? That they don’t comply with the measures of the government, that they overflow in combative actions and that the comrades go from the specific demands of each house of study to revolutionary political demands against the old State.

In short, everything that “stains” the march according to the monopolistic press, in reality, is that which makes it advance. What else would they want than for this mobilization to be limited to demanding standards that are answered in parliament! If the raised voices of the women have been heard it is because they have gone out into the street and pursue the path of developing popular protest.

That same day, at the very moment when part of the march attacked FF.EE. [special forces of the Chilean Army], a group of women came to the aid of the Carabineros [Chilean police] and confronted those who protested. Another group of five women embraced with a woman from FF.EE. These facts reflect the backward ideas that exist in the feminist struggles, since by focusing on the contradiction between man and woman, they end up joining a rancid institution, who repress the Mapuche people, the union mobilizations, the student protests, manipulate the arrested and even beaten, provoking abortions. Even in the LUN [the Las Ultimas Noticias newspaper], Agustín Edwards’s rag, they boasted how Piñera’s government used separatism to stifle the popular protest, taking women police to the streets.

This mobilization has been characterized by its mass, its demands and by channeling the women’s ferment that had not been incorporated in other struggles. On the one hand, the separatism present in some occupations is based on the just need to have instances for women to express themselves freely and take action, and even develop as the direction of the movement.

On the other hand, separatism also expresses the positions of feminists who have become radicalized from a conception that focuses on the individual and not on the collective. This will only weaken and isolate the just struggle of women, making it difficult to advance towards just class positions.

The same “Chepa”, Patricia Troncoso, Mapuche fighter and along with other lamgnen [Mapuche women], showed in a university forum – prior to the wave of occupations – a certain distrust of feminist positions that end up weakening the movement. How much the Mapuche women know about the need to strengthen the movements so that they persist and confront their enemies!

To build a women’s movement under the class line and linked to the revolutionary struggle of the people is inevitable, because this wave of occupations is raised to remind us that without women, revolution is not possible.