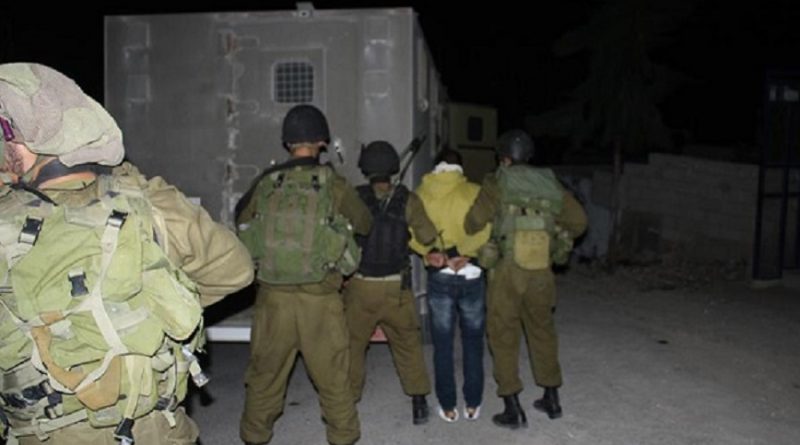 A report by Commission of Detainees and Ex-Detainees Affairs emphasizes the policy of intensified collective punishment conducted by the Israeli government since the start of the popular uprising, known as Intifada Al-Quds, on October 1st, 2015. The Israeli government embarked upon a wide-ranging campaign of mass arrests without differentiating between children and adults, men or women.

The campaign has been characterized by mass detentions of minors (children under the age of eighteen) and exposing them to inhuman and degrading treatment, physical torture, and unfair trials.

The number of Palestinians who are still under arrest has reached 7000, including 340 minors and 56 women. This number is subject to constant change due to the continuous arrests.

The campaign of arrests conducted especially against children was the result of political decision directly from the occupation government as well as the racist provocation by Israeli leaders against the Palestinian people and their leadership.

More than 20 male and female detainees were arrested after being shot by the Israeli soldiers and many of them are still detained in Israeli hospitals.

The crimes and violations committed by Israeli occupation against Palestinian prisoners include:
Deliberate killing and extrajudicial executions instead of arrests.
Orders to Facilitate shooting Palestinians instead of arrests and detention.
Leaving the wounded detainees bleeding for a long time without giving them first aid.
Kidnapping wounded detainees from hospitals.
Torture, brutal abuse, psychological pressure, and threatening against the detainees especially children.
Using dogs to attack the detainees while arresting them.
Using special units to arrest and kidnap Palestinians.
Using detainees as human shields.
Demolishing the homes of detainees.
Retaining the bodies of Palestinian martyrs.
The passing of new legislation that allows for the arrest and sentencing of minors at the age of 14, and the proposal of further legislation that allows for the arrest and sentencing of children at the age of 12.
Placing detainees, especially children, in prisons that lack the essentials of human life, such as Givon prison in the city of Al Ramlah.
Arrests that aim to suppress the freedom of expression and activities on social media.

The Commission states that Israel behaves as a state above international law and thus violates the rights of detainees without concern for consequences. Israel also frequently paints its crimes with a color of legality through racially discriminatory legislation passed by the Israeli legislating bodies and enforced by the Israeli judicial system; including the Israeli High Court of Justice.

The report singles out the fierce onslaught being carried out on the city of Jerusalem and its residents considering it of the outmost concern. 800 Palestinian Jerusalemites have been arrested since the beginning of October by the end of 2015, half of whom are minors. Excessive punishment was imposed on children such as: house arrest, isolation, high fines, and ethnic cleansing practiced in Jerusalem.

The annual range of children detention was around 700-900 before the eruption of the uprising, whereas, it reached to 1200 arrest cases during the last two months of 2015 alone.

Through political resolution, the Israeli government has eliminated the immunity of children in detention and trials. Thereby, the Palestinian childhood is targeted in the detention campaign.

The campaign of detention is accompanied by collective punishments represented in:
Home demolishing.
Retaining the corpses of martyrs.
Isolation, deprivation and marginalization of Palestinian Jerusalemites.
Imposing of further taxes in Jerusalem.
Revoking the identity cards of Palestinian Jerusalemites.
Intensify closures and increasing of checkpoints between the cities.
Breaking into hospitals and abducting injured people.

On the other hand, in its last statistic about imprisoned Palestinians in Israeli jails, the Addameer Association reported, at end of August 2016, the following figures: