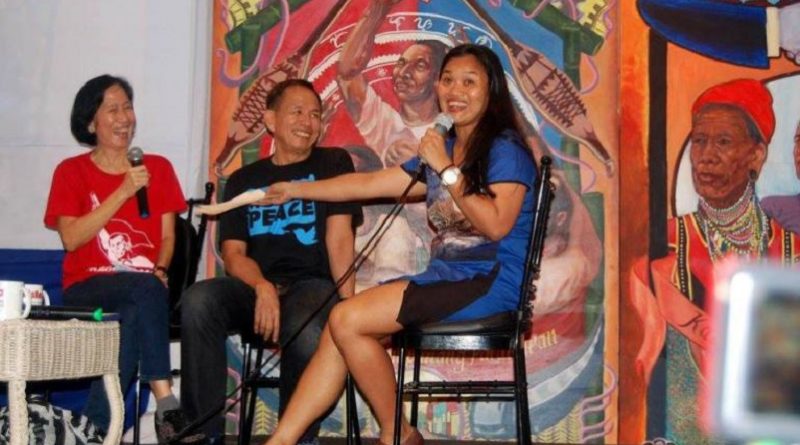 MANILA – It was a light, afternoon talk show at a mall, with guests who are famous, long-time sweethearts; a host both bubbly and witty, and a hall packed to the rafters with adoring “fans.”

A showbiz meet-and-greet? No, it was the first public forum in Metro Manila of National Democratic Front of the Philippines (NDFP) peace consultants and couple Benito Tiamzon and Wilma Austria-Tiamzon, who tackled a subject only whispered in secluded rooms or shouted in quick-dispersing “lightning” rallies in the cities: the raging Philippine revolution.

Dubbed “The Struggle is real: laying the foundations for just peace,” the forum was sponsored by Bagong Alyansang Makabayan (Bayan), and hosted by Fishermall at its Expo Hall 2 in Quezon City. University of the Philippines sociology Prof. Sarah Raymundo facilitated the forum, which also featured performances from progressive bands Pordalab and Tubong Dabaw (Tubaw), artist Bibeth Orteza, and even peace consultant Tirso “Bart” Alcantara.

Other NDFP consultants were also present, who, like the Tiamzons, came fresh from the peace talks in Oslo, Norway which followed their successive releases from detention in August.

Who are the Tiamzons? Are they not hardline communists out to topple the government? To the consternation of anti-communist trolls and reactionary forces, but to the rejoicing of the progressives, the Tiamzons and other formerly underground personalities hunted by government are now in public discussions, representing the face of a movement seeking radical, genuine change in the country.

The forum gave a peek into the life of revolutionaries, as the Tiamzons talked about why there is an armed struggle in the countryside, and consequently, peace talks; and why the revolution still needs to be waged even after almost five decades. With the GRP-NDFP peace talks pushing through, progressives try to involve a broader audience on discussions about the roots of the armed conflict.

Why is there a revolution, an armed struggle?

“Our country remains entrenched in crisis because of foreign domination, and feudal exploitation in the countryside,” Benito explained in Filipino. “The revolutionary movement aims for fundamental changes in the system, to overturn society, so that those at the bottom will be at the top.”

To overturn society, one needs to wage armed struggle. “It has to be a scientific struggle,” Wilma said. She said the people have been fighting for change throughout history, in spontaneous peasant insurrection and pocket rebellions, but were suppressed by colonial powers or puppet regimes.

Since 1969, the New People’s Army (NPA) has been at the helm of a unified fight, and engaged in education and organizing work for mass-base building, production work, and of course, military work. As the revolutionary movement aims to destroy the existing socio-political structure, it has begun to establish a new one, in its guerrilla fronts in the countryside, where the population have been implementing the NDFP’s 12-point program, setting up political organs of power.

“The NDFP is the united front of the most consolidated forces waging the struggle for national democracy…it stands as the political authority of revolutionary forces in the countryside,” said Benito in Filipino. This includes the Communist Party of the Philippines (CPP), the NPA and revolutionary mass organizations of workers, peasants and other democratic classes, he added.

Standing as the political authority of revolutionary forces in the countryside, the NDFP also represents the whole revolutionary movement in dealing with foreign governments, and in peace negotiations with government, he said.

“If you’re waging armed struggle, why do you engage in peace talks?” asked Raymundo.

“Because of the armed struggle,” Benito answered, evoking laughter from the activist-dominated audience, who apparently understood what he meant.

Benito said that when the revolutionary movement was in its infancy, the government only ran after its forces and did not bother to hold peace talks. Now, government is now obliged to sit down in talks, because with the spread and strength of the revolutionary forces, they know they cannot crush it through a purely military solution, he said.

“When opportunities arise to bring meaningful benefits for the masses, the revolutionary forces should take them. But it must be clear that for as long as there is no decisive solution to the problems of the people, there is no putting down of arms,” he said.

Many perceive ceasefire as the end result of peace talks, but Benito said just and long lasting peace will only be gained if founded on fundamental socio-economic and political reforms.

The second substantive agenda, on socio-economic reforms, is the heart of the talks, he said.

“It is the crux of the whole crisis in the country, its backwardness and failure to industrialize; which is why the people are impoverished and have no decent living” he said.

After showing a video clip of President Duterte ranting about the US government and its atrocities to Filipinos, Raymundo asked for the couple’s reaction.

Prospects of genuine change under Duterte

“I felt proud of Duterte. It seems he has inherited the courage of Dagohoy and Sakay” Wilma said.

Wilma said that the third substantive agenda, political and constitutional reforms, will aim to correct unequal Philippine relations, such as onerous treaties like the Enhanced Defense Cooperation Agreement (Edca). A president with a strong sense of history and patriotism is just what is needed.

Later, in answering another question, she said the peace talks may even lead to forming an alliance with government. “We will have an ally in fighting US imperialism,” she said.

“But the drafting of the agreements is not just between the two negotiating panels,” Benito said. Although the government panel is composed of “more enlightened personalities who have good appreciation of progressive reforms,” he said they are just a part of government, which is comprised of various forces and vested interests that may block such reforms.

It helps that Duterte has taken a firm stand, such as in the releases of prisoners. But as the peace talks progresses to tackle crucial national issues, government will be obliged to firm up its position on other key issues, Benito said.

The appointment of activists into cabinet positions also opens opportunities for reforms. But genuine land reform implementation, for example, requires more than that, Wilma said. The participation of farmers must be ensured, as land reform involves not just government, but confronting big landlords and their private armies.

Asked about Duterte’s war on drugs, the Tiamzons said his campaign exposed the gravity of the drug problem. “But the revolutionary movement perceives this as not just a law enforcement problem, but more of a socio-economic problem, and needs a socio-economic solution,” Benito said.

He cited China’s successful model during the time of Mao Zedong when they solved the problem of 70 million opium addicts. The people actively participated, while government bought out the smaller dealers, and aggressively ran after the big ones. The addicts were treated, he said.

Someone from the audience asked if the peace talks will also tackle the problem in traffic and slow internet in the country. Wilma said it will not, but whatever agreements will be forged will lead to long-term solutions, specially the problem of uneven development between the cities and the countryside.

“For now, maybe the people in NCR need to organize (to help resolve traffic),” she said.

Whether the problem is land reform or traffiec, the two consultants said the solution lies in the people’s continued struggle, and should not hinge on the peace talks.

“One doesn’t wait for the other” he said. Every opportunity to push for meaningful reforms must be pushed for the benefit of the people, he added.

The couple also entertained questions sent through social media, one of which asked what is the secret to a “liberating love” such as theirs. The two have been high school sweethearts before they became revolutionaries and married.

“In a relationship, it’s important to have harmony in love, and more importantly, to be partners in struggle,” Wilma said, “together with the masses.”

The Tiamzons highlighted what anti-communist propaganda has failed to drown out: that the national democratic revolution has stirred the best and the brightest among Filipino youths, many of whom may now be advanced in years but still persevere in its mainstream, and given the unchanged conditions from five decades ago, the revolution is here to stay until its final victory.