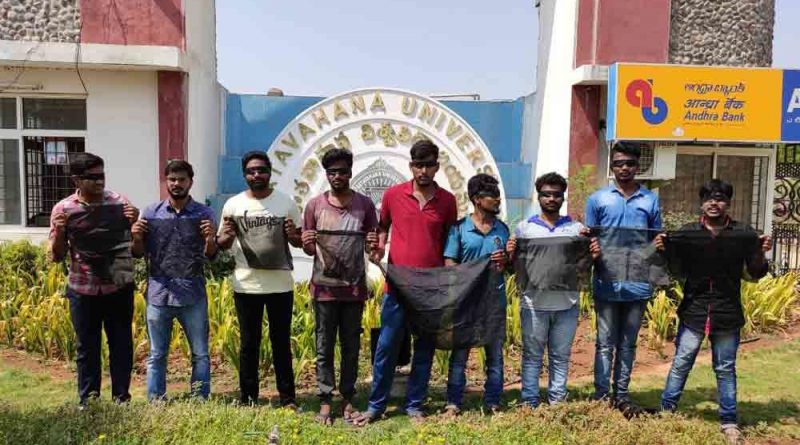 Karimnagar: The representatives of Telangana Vidyarthi Vedika (TVV) demanded unconditional release of Delhi University Professor GN Saibaba, who has been sentenced to central jail in Nagpur. They staged a protest by covering their mouths with black ribbons in front of Satavahana University in Karimnagar on Monday.

The protestors alleged that the BJP government is treating Prof Saibaba harshly, who is suffering from 90 per cent disability. When 100s of political gundas and terrorists were released on bail by the government, why it is not giving bail to the professor, who is fighting for the rights of tribal people, they questioned.

Even the united nations also requested the government to release Prof Saibaba along with other countries, but the government is behaving stubbornly with the professor, they added. Professor Saibaba is also suffering from several health issues due to lack of proper medical care provided to him in the jail. He is being subjected to mental torture. Laws, courts and jails are meant to mend the ways of people but not kill them, they criticised.

TVV representatives demanded the government immediate release of Prof Saibaba unconditionally. Otherwise they warned of launching massive movements and would teach the government a fitting lesson.

TVV representatives Venkatesh, Suresh, Vital, Mahesh, Ranadheer, Babu, Kranthi and Raju were present along with others.