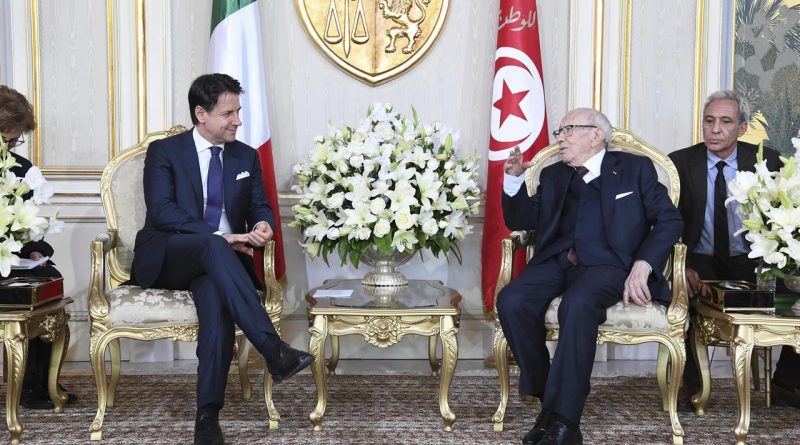 Workers and peoples of all countries unite!

On April the 30th, the highest representatives of Italian imperialism and the Tunisian comprador bourgeoisie ones met in Tunis at an inter-governmental meeting after which they announced that they had signed as many as 7 agreements. It was since 2012 there has been no similar meeting between the governments of the two countries, meanwhile from 2017 Italy has become the first trading partner of Tunisia with a clearly favorable inter-trade exchange for the imperialist country of the northern Mediterranean.

Once again the two governments agree about fighting the immigration of our brothers and sisters who from various nations (including Tunisia itself) depart from Tunisia to Italy and Europe escaping from the wars provoked by the imperialist countries Europeans including Italy and the misery produced by the world imperialist system in which the regimes of African countries are accomplices, also caused by unequal economic agreements of the neo-colonial type like these. Just 10 days after the signing of this agreement, a massacre of migrants took place once again near Sfax, in which more than 70 people died, mainly Bangladeshis but also Moroccans, Egyptians and Sub-Saharan Africans. The blood of these migrants once again stains the hands of the rulers of the northern and southern Mediterranean shores governments and cries out for vengeance!

Another important point is the conversion of € 25 million of Tunisian foreign debt towards Italy as a “gift” to finance the “administrative decentralization” in Tunisia or for local public administrations. In concrete terms, this sum will be spent at Italian companies from which all the goods and services necessary for the price decided by the Italian companies will be purchased. Tunisia will not be free to choose to spend this money on cheaper suppliers like national companies. A real fraud in favor of the Italian economy and to the detriment of the Tunisian economy of which the Tunisian government is complicit.

The Tunisian government once again shows how it is servile towards Italian imperialism in its interests in Libya, where the Italian-flag oil company, Eni has enormous interests as well as in Tunisia. Another point of the agreement was in fact Tunisia’s support for Italy’s aspirations in Libya.

The Tunisian government has signed all of these agreements in exchange for the vague promise of greater shares of Italian tourists in Tunisia and the importation of olive oil. A barter that is played on the skin of the Tunisian people, of the Libyan people and of the migrants who cross both Tunisia and the Libyan chaos where they are continually harassed, enslaved, raped and killed and, when they try the sea route they often find themselves hunted down. by Libyan and Tunisian patrol boats often supplied by Italy and other imperialist countries.

We salute the latest protests in the Italian squares against the fascist Leaue party leader Salvini and the populist Di Maio, the workers in Italy of any nationality must organize themselves against the Italian masters against the continuous attack on the rights of workers and against the attempt to divide the working class between Italian and immigrants with the aim of weakening the working class itself, with the closure of companies and the delocalization in countries like Tunisia, the attack on wages and the blackmail of social control through the “citizenship income” of the Di Maio / Salvini government. The joint declaration of Maoist parties and organizations on the occasion of the first of May signed by us states: “In the imperialist countries, while proletarian and popular struggles are increasing, like in France, advances the populist-beam demagogy and the use of the great migratory waves provoked by imperialism to direct the anger of the masses not towards the domination of the bourgeois forces in power but towards migrants creating a war between the poor “.

We salute the struggles of the Tunisian people and in particular those of the peasant women on strike in Sidi Bouzid after another massacre at work and against the Aleca (the In-depth Free Trade Agreement with the EU) both struggles characterized the May Day in Tunisia.

We salute the protest of the immigrants of the sub-Saharan peoples in Tunisia this May in Tunis to obtain their rights and we support the freedom of movement of migrants and the right to asylum in Tunisia.

We call on the Italian workers and the Tunisian people to unite in this battle against the common enemy: Italian imperialism and Tunisian reactionary regime.

From the joint declaration of the Maoist parties and organizations on the occasion of the 1st of May 2019.