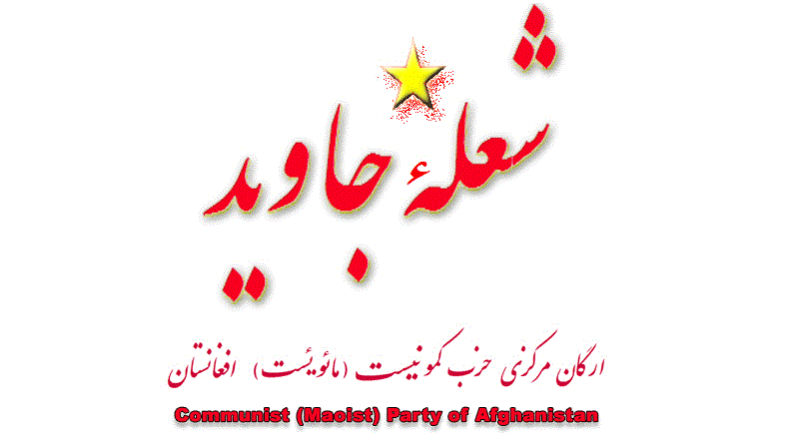 We stated in the editorial of Sholajawid # 19, November 2018, that “efforts for peace is another way to intensify conflicts and war in the country.” The experience of the past several months has clearly demonstrated that despite several rounds of prolonged “peace negotiations” between the US and the Taliban has not resulted in an agreement. Rather, the continuation of negotiations and the prolongation of such meetings has resulted in the intensification of war in the battlefields of Afghanistan.

First, as a historical fact it should be acknowledged that when the Soviet social-imperialists withdrew their forces from Afghanistan, the Soviet state and its puppet regime in Afghanistan did not recognize the Jihadist organizations supported by the western imperialists and other reactionary powers in the region, including the Chinese revisionists, as its main adversary in that war. With the approval of the US, they only chose to portray Pakistan as the main adversary of the Kabul puppet regime and, with the US and the USSR acting as a co-guarantor, made the two sides sit together in Geneva to negotiate on “issues relating to Afghanistan.” Singing the Geneva Accords (1988) was considered a political victory for the Kabul puppet regime and a loss for the jihadist organizations at the time.

But this is a proven historical truth in all wars, that the victory and defeat of different sides of war is basically decided on the battlefield and not on the negotiating table. Hence the victor in that war in Afghanistan was the jihadist organizations and not the puppet regime in Kabul.

Therefore, first the victor of the current war in Afghanistan must be determined on the battlefield. Then, this victory in war must be confirmed at the negotiating table where one side surrenders or is smashed by the victorious side and peace achieved.

Now, despite the relative achievements of the Taliban in the war in Afghanistan, and the expansion of territory under their control in the past few years, the Taliban has not clearly emerged as the winner of the war in Afghanistan so as to seal their victory on the negotiating table. The Taliban lacks strong support among the masses in Afghanistan and does not have reliable international patrons. The inhabitants of the country are at best barely tolerating them, and its foreign patrons––especially their big foreign patrons, such as Russia and China––are only instrumentally using them against America.

The American imperialist occupiers and their puppet regime have also not yet met a decisive defeat that would force them to acknowledge their defeat and accept the Taliban’s victory.

The absence of a widespread and decisive anti-war movement among American people against the war in Afghanistan, due to the war confronting forces like the Taliban and al-Qaeda, has so far been a strong point, within their own country, for the American imperialist occupiers. At the same time, the puppet regime is extremely unpopular among the Afghan masses, which forms the regime’s greatest weakness.

It is therefore that, alongside the warmth of peace negotiations in Qatar, the fire and heat of the battlefield in Afghanistan has simultaneously increased. Now, whether the puppet regime would be included in peace negotiations, the final destiny of the war and peace in Afghanistan will be decided on the battlefields and only confirmed after at the negotiating table. Otherwise, there can only be a collusive and compromised peace.

Conducting “secret diplomacy” during the peace negotiations in Qatar in the past few months is indicative of the strong proclivity of both sides for reaching a collusive peace accord. It is clear that the “collusion” and “compromise” of a guerrilla movement of a ruined country like Afghanistan with the number one imperialist power (despite its current economic, political, and military decline) will result in the former succumbing to the latter––especially since this guerrilla movement previously came into being with the support and funding of this imperialist power.

Therefore, if we do not understand the sensitive historical situation and do not strive for performing our historical responsibilities the country and its people will not forgive us.