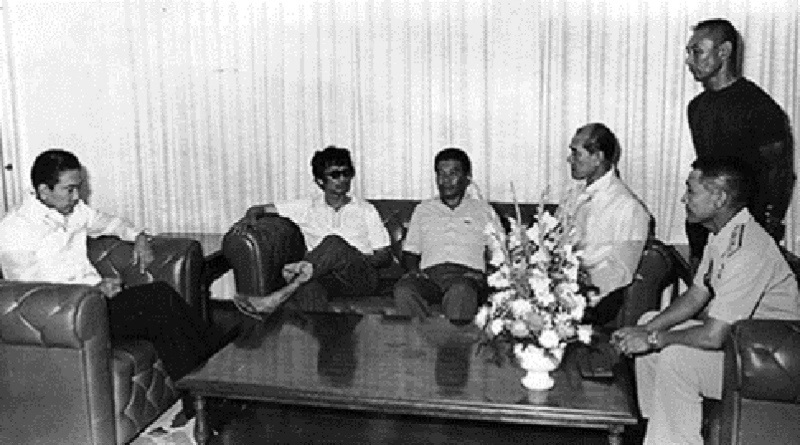 1. The Filipino people cannot allow Ferdinand Marcos, the 14-year long fascist dictator, a traitor and a criminal of colossal proportions to be honored in any manner as a hero. They cannot forget and forgive his gross and systematic violation of human rights. He was culpable for the murder of at least 3,240 of his political opponents. He caused the torture of at least 34,000 and the illegal imprisonment of 70,000. He used his despotic power to enrich himself and his family. He incurred excessive foreign debt for overpriced infrastructure projects. He plundered public resources amounting to at least Php167 billion in pesos and at least USD 15 billion.

2. Marcos was definitively and categorically condemned by the Filipino people as a fascist dictator and was overthrown from the presidency through the sovereign revolutionary act of the people who stormed the presidential palace in 1986 and flooded Edsa to persuade the reactionary armed forces to withdraw support from him. Had he not been helicoptered out of his palace by his US imperialist master, he would have been immediately arrested and tried by the Filipino people or he would been dealt with summarily like Mussolini upon the defeat of the fascists in Italy.

3. But even then his thousands of victims of at least 9,500 sued him for human rights violations in the US judicial system. He was found criminally culpable for these human rights violations. The heirs of his estate are under obligation to indemnify the victims. The final US court decision is accepted by the Philippine government, which has taken responsibility for processing and distributing indemnification to victims from the erstwhile Swiss bank deposits of the plunderer Marcos.

4. In view of its recent decision to allow the remains of Marcos to be buried in the Libingan ng mga Bayani (LNMB), the current majority of the Supreme Court should be reminded that the 1973 Constitution which was used by Marcos to impose fascist dictatorship on the Filipino people was scrapped upon the downfall of Marcos and was replaced by the 1987 Constitution. This current Constitution carries explicit provisions regarding human rights and restraints on presidential powers by way of condemning and repudiating the colossal crimes of th Marcos fascist dictatorship. These were committed through unlimited concentration of executive, legislative and judicial powers in the hands of one person.

5. Since the fall of the Marcos dictatorship, the three branches of the Philippine government have always agreed that the Marcoses have engaged in the criminal plunder of public resources and that the ill-gotten wealth must be recovered. Investigations and court proceedings have been successfully undertaken to establish the criminal culpability of Marcos for plunder.

6. No less than the chief PDF-Laban party mates of President Duterte, the founder Aquilino Pimentel Sr. and Senate President Aquino Pimentel III demand that Marcos should not be honored as a hero and the victims of the Marcos dictatorship should not be made to suffer further injustice.

7. Many of those who are personally close to Duterte say that he should not betray the stand of his own late mother who stood up articulately and courageously against the Marcos dictatorship. The Marcos fascist dictatorship is not a good example for Duterte to project an image of strong leadership. He can make a revolutionary stand on issues and he can thus stand as a strong leader of the people.

8. Marcos himself wanted to be buried beside his mother. Why submit to the political whim of his heirs to use the burial of his remains or display of his wax figure at LNMB as a means of revising history, covering up the monstrous crimes of Marcos and boosting the Marcos family’s political stocks.

9. To bury the remains of Marcos in LNMB is a violation of the agreement of President Ramos and the Marcos family that said remains must be buried in Batac Ilocos Norte.

10. Too much public resources will be wasted to secure the remains of an arch traitor at LNMB from being blown up like the oversized bust of Marcos on the way to Baguio.