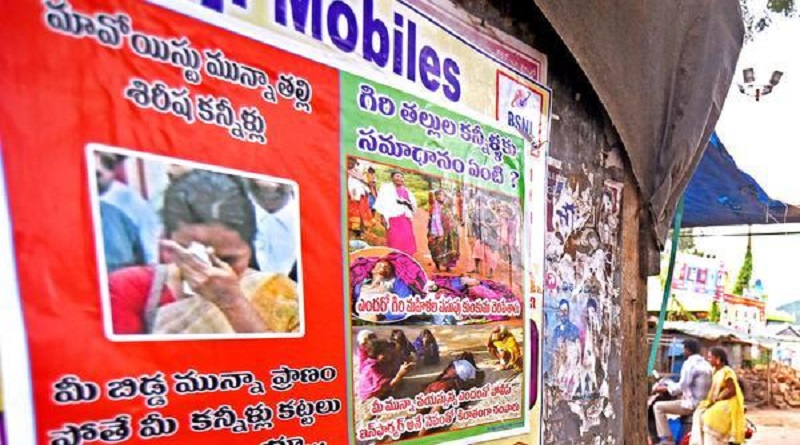 K. Sirisha, wife of CPI (Maoist) Central Committee member Akkiraju Haragopal alias Ramakrishna alias RK, has condemned the use of her picture in the poster that is being widely circulated, allegedly by the police in the agency areas of Visakhapatnam. The poster has sprung up after the recent alleged exchange of fire in the cut-off area of Andhra Odisha Border (AOB) that left about 30 Maoists dead.

This is the first time that the police have reportedly taken up a poster war to counter the Maoists’ strategy and is being viewed as a ploy to distance the adivasis from the Maoists’ reach.

The poster has the picture of Ms. Sirisha weeping over her son Munna’s body, with the caption accusing the Maoists of distancing her husband RK and her son Munna from her. While Munna was one among the 30 killed, RK is believed to have escaped the attack.

She told The Hindu that the police had no right to print her pictures without permission and moreover the slogan was not coined by me and it was made up by them. This was a case of defamation.

According to Ms. Sirisha, she married RK fully knowing that her husband was a committed Maoist and even she had actively worked in the movement.

“I moved out of the movement due to health reasons. But my husband is still continuing and my son Munna, who is no more, had also joined the movement with our knowledge and there is no regret over his death, as he has become a martyr for me. So how does the slogan fit in? The police cannot put words into my mouth,” she said.

Ms. Sirisha, accompanied by a team from the Jana Natya Mandali (JNM) and Amara Bandhula Mritula Sangam (ABMS), had held a meeting at Bakuri in Hukumpeta mandal in Visakhapatnam agency on Wednesday and inaugurated a pylon in memory of Bakuri Venkata Ramana alias Ganesh, a senior Maoist leader, who was also one among the 30 killed. Ms. Sirisha and Padma Kumari of the ABMS termed the reported exchange of fire as one-sided killing. Reports from ground zero and a few who survived the assault led by the Greyhounds had said many of the Maoists, including Bakuri, Shnati and Mamata, were injured, rounded up, tortured and then shot dead in close range, they claimed.

“We have seen Mamata and Bharathi’s bodies. There were clear signs of torture. While both the breasts of Mamata were found cut, one breast of Bharathi was missing. The bodies were in bad shape,” Ms. Padma Kumari alleged.