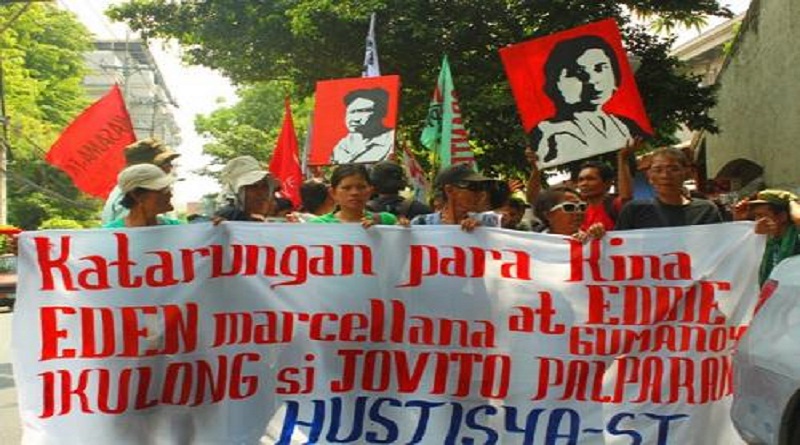 People's War Philippines
April 22, 2017December 8, 2018 Redspark Team CPP-NPA-NDF, Karapatan
Washington, DC, US – “While General Jovito Palparan was charged and is now prosecuted for the disappearance of two women activists, he is yet to be prosecuted for the killings of more than 200 activists during the Arroyo regime. We call on Pres. Duterte and the Department of Justice (DoJ) to hold Palparan accountable for these crimes and junk US-directed counter-insurgency programs in the Philippines through which these crimes are perpetrated,” said Cristina Palabay, Secretary General of Karapatan, in a forum at the Washington Peace Center in the US.
Palabay is with a delegation of human rights defenders conducting a speaking tour in the US on peace and human rights issues in the Philippines.
Among Palparan’s victims are Karapatan human rights workers. Fourteen years ago today, on April 22, 2003, the secretary general of Karapatan-Southern Tagalog, Eden Marcellana, and chairperson of Katipunan ng Samahang Magbubukid sa Timog Katagalugan (Kasama-TK), Eddie Gumanoy, were killed, their bodies found in a ditch in Bansud, Mindoro Oriental. The two human rights workers led an 11-person fact finding mission in Gloria town in Mindoro before the group was taken by soldiers.
Kin of victims and Karapatan filed murder cases in the Department of Justice (DOJ) against the perpetrators, of which Maj. Gen. Jovito Palparan was among the accused. The case was dismissed three times. This prompted the victims’ relatives to file a complaint in the UNHRC in March 2006. “Today, we remember them, their work, and their dedication in paving the way for a society where people’s rights can be fully realized,” Palabay said.
Maj. Gen. Palparan is currently undergoing trial for charges of kidnapping and illegal detention of disappeared students Karen Empeno and Sherlyn Cadapan. Palparan, however, is detained in a military facility, instead of imprisonment in a civilian detention center. Palabay added that “after the deaths of Marcellana ang Gumanoy, brutal killings have continued from one regime to another.”
“There were 1, 206 victims of political killings during the Arroyo regime,  332 during the BS Aquino regime, and 50 politically-motivated killings documented in the current administration. Majority of these cases are left without resolution, with perpetrators still free from persecution. The climate of impunity persists, with State security forces shielded from punishment and oftentimes, even promoted,” she stated.
Palabay also cited the massacre of Manobo leaders Dionel Campos and Datu Juvello Sinzo, and ALCADEV executive director Emerito Samarca on September 1, 2015, under the BS Aquino III regime. Campos and Sinzo were killed in front of their community in Lianga, Surigao del Sur, while Samarca’s body was found in a Lumad school, his throat slit open from ear to ear.
“The perpetrators of what came to be known as the Lianga massacre are still at large. This is another telling indication that the State was never on the side of the marginalized – protecting fascist elements that have long been instruments of repression and killing individuals who have dedicated their lives in services of the poor and oppressed,” said Palabay.
“Despite such tragedies, they live. The legacies of Marcellana, Gumanoy, Sinzo, Campos and Samarca are embedded in the communities they have organized, in the peasants they have worked alongside with, and with the indigenous people they both taught and learned from. For us, the death of fellow rights defenders can only strengthen our resolve to change this oppressive and repressive system. With them in mind, we will never tire to demand accountability and justice,” Palabay concluded.