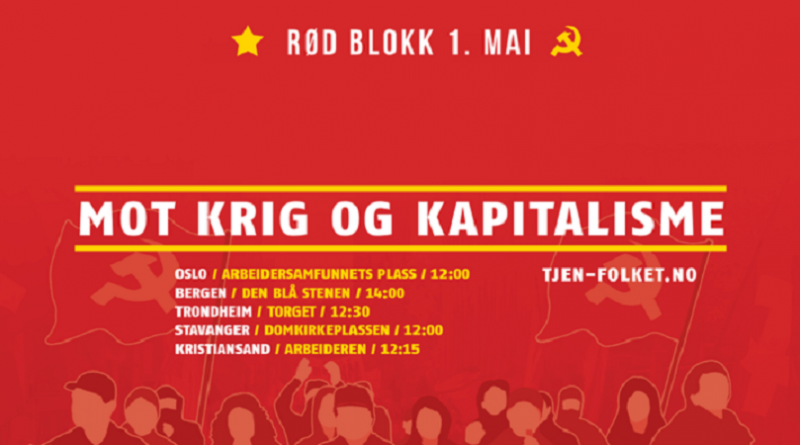 Red Block against capitalism and its wars – make way for a communist party dedicated to the struggle!

Tjen Folket organizes Red Block May the 1st in 5 cities in 2017. In addition, we participate in marches and events elsewhere in the country as well. We urge all those red and revolutionary, all anti-imperialists and anti-capitalists, to join a truly red May the 1st.

Tjen Folket is working towards creating a genuine communist party in Norway. A fighting party. An activist party. An organization dedicated to the struggle. A party that really is the proletariat’s own party, and that fights for the proletariat taking power – by all means necessary. A party of a new kind – against all the old parties and their corrupt bureaucracy. A party that can be the centre and the leadership for a revolution that tears down the old state, and builds a new socialist worker’s state.

The Norwegian state and capital are imperialist. They are parasites that become rich from the labour of poor people in the Third World. They organize plundering, and they bomb the world’s poorest people – as they did in Libya. They act as false peacekeepers, when they enter into conflicts to serve the United States and their own interests – against the struggle of the people. Our main enemy is here in our own country, it is the Norwegian capitalists and their state. The first of May is a day of struggle for the working class, for the proletariat, against capitalism – for socialism.

We are not pacifists. We know that the enemy is armed and ruthless. We want a peaceful world where no one starves and no one suffers. But as Mao Zedong said, “We are advocates of the abolition of war, we do not want war; but war can only be abolished through war, and in order to get rid of the gun it is necessary to take up the gun.“

Everybody who wants to struggle against capitalism and for socialism is welcome to join us in Red Block May the First.

Red front – against state and capital!
Death to imperialism – class struggle until communism!