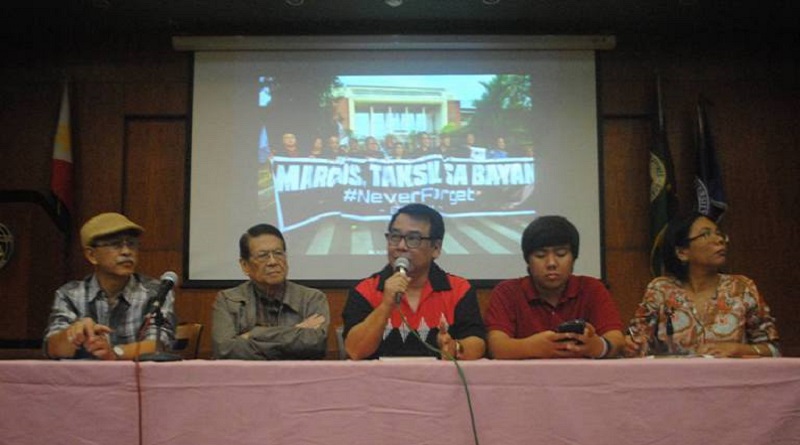 “We cannot accept the rehabilitation of the Marcoses, and their kind of leadership based on swindling, lies, deception.”

MANILA – Martial law activists and other progressives are gearing up to form a broad united front, banking on renewed outrage against the Marcos dictatorship, mainly among the “millenials,” the youth who comprised majority of those who protested around the country against yesterday’s hasty burial of ousted dictator Ferdinand Marcos Sr. at the Heroes Cemetery in Taguig City.

At the assembly of the Campaign Against the Return of the Marcoses in Malacañang (Carmma) today, Nov. 19, groups announced that they will stage a massive protest on Nov. 25, to make President Duterte feel the true sentiment of the Filipino people against the Marcoses, martial law, and its legacy of impunity.

Progressives say the issue now is not just about the burial, or about historical revisionism, but the very future of the nation that is now being threatened by the return of its darkest days, with the rehabilitation of the Marcoses and their cohorts, courtesy of Duterte. The issue has sharpened the contradiction between progressive groups and the Duterte administration, putting their relations under an acid test.

“This is a crucial test on the relations between the Left and the Duterte administration,” said Renato Reyes Jr., secretary general of the Bagong Alyansang Makabayan (Bayan), describing the friction triggered by the burial. “Nagkakabanggaan, nagkakasingilan,” he said.

Makabayan President and martial law activist Satur Ocampo said that although progressives welcomed Duterte’s certain moves – such as the resumption of peace talks, the appointment of Leftist leaders, and his pronouncements on independent foreign policy –the President’s continued alliance with the Marcoses is “diametrically opposed” to his promise of change and the progressives’ stand.

“We cannot accept the rehabilitation of the Marcoses, and their kind of leadership based on swindling, lies, deception,” he said. “Makabayan stands for politics of change. This is not that kind of change, but the return of the worst experience, of interests that that should have been buried even deeper than Marcos’s remains.”

“We should tell President Duterte that this personal relationship, political patronage (for the Marcoses) is against his pronouncement for change,” Ocampo said. He said Duterte should not feel indebted to the Marcoses because his father was a governor during the Marcos regime and that they donated money to his campaign in this year’s elections.

In the Carmma assembly held at the Malcom Hall in the University of the Philippines-Diliman in Quezon City, anger over the Marcos burial still boils among actual victims of the dictatorship – former student activists who were arrested, tortured and detained during martial law – who comprise most of Carmma’s conveners.

Rody del Rosario, First Quarter Storm activist and a founding member of the now-underground group Kabataang Makabayan, lamented that Duterte ignored how Marcos died and was buried without having indemnified the victims of his brutal regime.

“(Duterte) shouldn’t be too smug because he got 16 million votes, because that support can dwindle, including from us,” he said.

Nathanael Santiago, secretary general of Makabayan coalition, stressed that although Duterte has a progressive side, he also has a “reactionary tendency,” and prone to spouse the line of thought and characteristics of a “fascist dictator” like Marcos.

Santiago cited how Duterte praised Marcos during the electoral campaign as “the best president,” and even lauded his agricultural program Masagana 99. Peasants have denounced the program for introducing chemical farming, which caused their bankruptcy and debt dependence.

He cited the Duterte administration’s intention to revive the Philippine Constabulary and the mandatory military service for students. Santiago also pointed out Duterte’s statement about suspending the writ of habeas corpus, which Marcos first did before declaring martial law in 1972.

“I no longer see this as a joke, because he keeps repeating it,” Santiago said.

Continued struggle against the return of martial law

The burial of remains of the ousted strongman at the Libingan ng mga Bayani in Taguig City came 10 days before the Supreme Court deadline for filing of a motion for reconsideration (MR) on Nov. 28. Martial law survivor and former Bayan Muna Rep. Neri Colmenares, who is the lawyer of the first batch of petitioners against the burial, said they will still file an MR to show their opposition, even if only for record purposes.

Colmenares said the Supreme Court violated its own rules by allowing the burial, even as it is yet to declare its ruling as final and executory. Colmenares, representing the first batch of petitioners, filed a motion asking the high court to clarify that the burial cannot yet proceed until the SC declares its ruling as final. Another batch of petitioners, led by Albay Rep. Edcel Lagman, filed a motion asking for another status quo ante order on the burial. The Marcoses disregarded these pending motions and pushed through with the burial.

Bayan’s Reyes stressed that the court is no longer the arena of struggle: “The battleground now is in the streets, schools, communities, social media, mainstream media and in the public consciousness – on how we will block historical revisionism and the rehabilitation of the Marcoses.”

He said the call now is to educate the people and mobilize them to make a stand.

Bonifacio Ilagan, martial law survivor and Carmma convener, said they will be forming a broad united front, not just against the return of the Marcoses and impunity, but for a fundamental social change.

Meanwhile, youth activists present at the assembly vowed to mobilize a bigger force on Nov. 25.
UP Diliman university councilor Ben Te lauded yesterday’s big protest by thousands of students, which disputed claims that the youth have forgotten the lessons of history.

“We showed that we have a deep understanding, and that the youth remember how other youths gave up their lives during the Marcos dictatorship. That is why we now have organizations, student councils… because the youth of the past fought for this,” Te said.

“We dare to ask ourselves what kind of future we want to leave for the next generation,” he said.