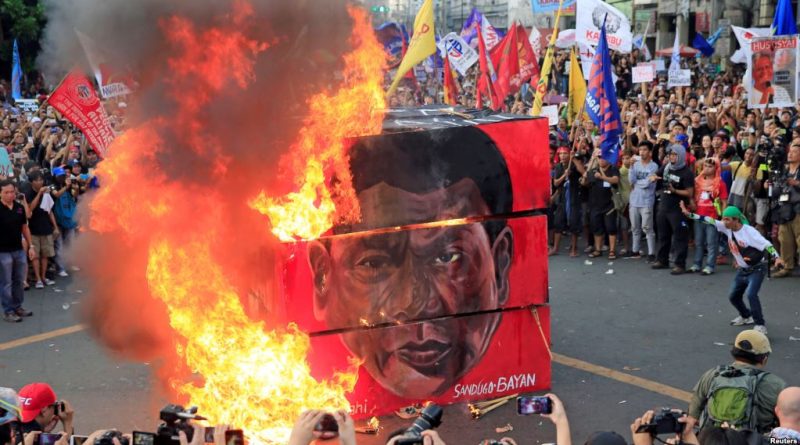 GRP strongman Rodrigo Duterte’s incessantly threatens to establish a dictatorship. The other day, he declared he will set up a “revolutionary government until the end of my term” in order to quell all dissent and arrogate the power to remove every one in government and appoint only those people who will will not criticize his rule. What Duterte essentially wants is to seat himself as a dictator with absolute powers unconstrained by the GRP constitution or any other law.

Duterte’ public bombast and threats are indications of his growing desperation to cling to power. The noise Duterte is generating, however, cannot drown the rising clamor for his ouster and the demand for him to account for all the crimes perpetrated in the course of his triple war.

Duterte is rushing to strengthen and consolidate his control of the military and police in order to mount a dictatorship and defend it by force through suppression of all forms of dissent and resistance.

Duterte is seeking the imprimatur of US imperialist chieftain Trump and the US security and defense establishment by giving all leeway for US military intervention in the Philippines and power projection in the South China Sea. He is exhibiting out-and-out subservience to the US.

Duterte wants to break down all barriers to his bureaucrat capitalist rule in order to give his cronies, big bourgeois comprador compadres and favored criminal syndicates unlimited opportunity to use public money and government privilege to accumulate profit and wealth.

Duterte is increasingly impatient in his plan to impose new taxes as guarantee for new loans from the World Bank and the AIIB and for Japanese ODA. He wants to rush the overhaul of the 1987 GRP constitution to pave the way for all-out liberalization and his plan to establish a federal form of government and allow him an extended rule. Duterte is aware he is fast losing time to allow his supporters a return of their hundreds of millions of pesos in campaign contributions.

Amid the deep-going economic and social crisis of the ruling semicolonial and semifeudal system, a Duterte dictatorship will most probably not last long, even if Duterte could afford to extend his life. Contrary to his aim of wresting complete control of the state, a Duterte dictatorship will surely deepen fissures among the ruling classes and within his regime, especially in the AFP and PNP, whose corrupt officials maintain fealty to anti-Duterte political factions.

In threatening to mount a palace coup, Duterte declared he will launch a “full-scale” war against the New People’s Army (NPA). In fact the AFP has not slowed down in waging its nationwide all-out war since last year. In line with Duterte’s order to “flatten the hills,” the AFP has carried out aerial bombardment campaigns against peasant communities endangering the lives of civilians. The AFP’s all-out war has resulted in widespread violations of human rights across the country.

Duterte said he is ready to wage another 50-year war against the NPA. Given the acute crisis of the ruling system, this is more than enough time for the NPA to defeat the AFP. In reality, however, the AFP and the reactionary government has failed in its attempts to quickly end the people’s war through successive all-out war campaigns. They also cannot deny the fact that for several months now, the AFP could not even decisively finish its limited war in Marawi City to quell an armed Moro uprising.

A Duterte coup to establish a dictatorship will succeed only in uniting the Filipino people in a broad anti-dictatorial front with the national democratic forces serving as the strong core. Having learned lessons from the Marcos dictatorship, the Filipino people are determined to resist Duterte’s plans to establish a fascist dictatorship. The people are unperturbed with his threats to “arrest all of you.” On the contrary, it is Duterte they want to be arrested in order for him to account for all the crimes he has perpetrated against the people.