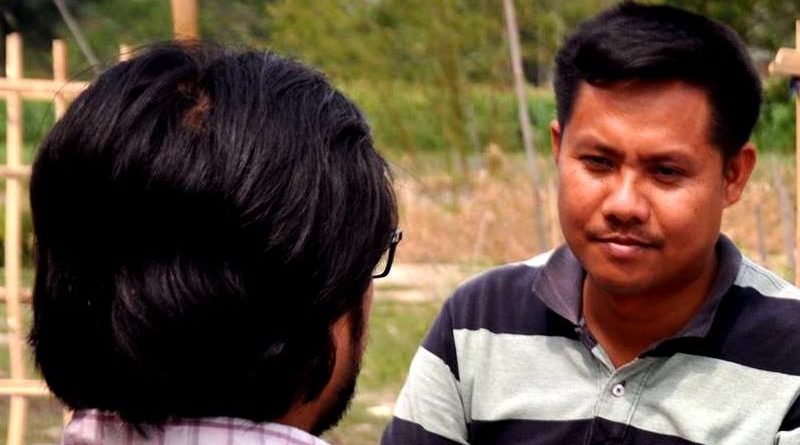 Imphal, April 20: Armed opposition group popularly known as Maoists which is operating at various northern and Southern state of India particularly at various area of Andhra Pradesh, Jharkhand, Bihar, West Bengal etc has spread its ideology far and wide prompting youths of the region (Manipur) to form an armed struggle group under the name “Maoist Communist Party, Manipur”. The armed rebel group which showed its existence by means of propaganda warfare and armed attacked to security force has finally revealed its strategy and also its network with all armed opposition groups operating at various part of the world including India.
In an exclusive interview, with Imphal Times, in a village located at Manipur and Assam Border, last week, founder of the Maoist Communist Party Manipur (MCPM) Chiranglen Sapamcha said that all armed rebel group operating at different part of the world including those operating at mainland India have common ideology and have now established proper network among them. The founder leader of the Manipur Maoist however declined to comment on how the armed groups under Maoist ideology at different part of the world are helping each other, but he said that the Maoists are preparing for a total war for a total change to end capitalism and imperialism.

Manipur, an Indian state, has been facing serious crisis in the last 4/5 decades after the emergence of armed opposition groups fighting to restore its sovereignty. The armed opposition groups operating in the region alleged that Manipur, an erstwhile Asiatic kingdom was never a part of India until it was forcibly annexed in October 15, 1949. Leaders of almost all the armed opposition groups operating in the region had been interviewed by various journalists to find out why they are waging against the government of India. However, the emergence of Maoist movement here in the state of Manipur is only some few years’ back and none of the journalists were able to reach out to the leader of the group until last week.

Chiranglen Sapamcha, the founder leader of the Maoist Communist Party Manipur, decline to take photograph with us however allow us to take one from his back.

On being asked about the Maoist Communist Party Manipur, its goal and the strategy, Chiranglen Sapamcha said Maoist Communist Party, Manipur bases is base on Marxism-Leninism-Maoism, principally Maoism with the creative application of this universal truth to the concrete conditions of the Manipur revolution under the collective leadership of the Party.  The ultimate aim of the party is the establishment of communist society.
He further said the Maoist Communist Party, Manipur is the consolidated political vanguard of the Manipur proletariat. Marxism-Leninism-Maoism is the ideological basis guiding its thinking in all the spheres of its activities. Immediate aim or program of the Party is to carry on and complete the new democratic revolution in Manipur as a part of the world proletarian revolution by overthrowing the colonial, semi-feudal system and the three targets of the revolution—Colonialism, imperialism and Comprador-Bureaucratic-Bourgeoisie (CBB).
He said, “The Protracted People’s War will be carried out by encircling the cities from the countryside and thereby finally capturing them. Hence the countryside as well as the Protracted People’s War will remain as the center of gravity of the party’s work from the very beginning.
During the whole process of this revolution the party, army and the united front will play the role of three magic weapons. The party will play the primary role; where as the army and the united front will be two important weapons in the hands of the party. Because the armed struggle will remain the highest and main form of struggle and army as the highest form oforganization of this revolution, hence armed struggle will play a decisive role. Whereas the united front will be built in the course of advancing armed struggle and for armed struggle. Mass organizations and mass struggles are necessary and indispensable but their purpose is to serve the war. The immediate and most urgent task of the party is to establish full-fledged people’s Army (PA) and base areas by developing and transforming the guerilla zones and guerrilla bases.”