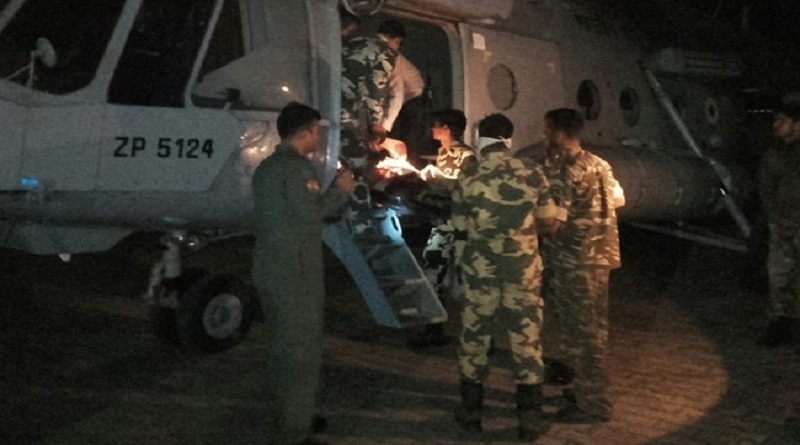 The April 24 attack on India’s Central Reserve Police Force (CRPF) contingent by the Maoist insurgents in Chhattisgarh state has evoked sharp reaction not only from the Indian leaders but also from Israel.

The ambush left 26 soldiers dead. The incident occurred in the Sukma district of the state that remains under influence of the ultra leftist Maoist insurgency for the past many years.

While the Prime Minister of India Narendra Modi tweeted that the “sacrifice” of the “martyrs’ will not go in vain, the hawkish media has blamed the incident on intelligence failure and the lack of political will to deal with Maoists. The opposition too has hardened its criticism of the government for not doing enough to tackle with the “biggest threat to the internal security of the country.” A section of the civilians organized vigils in memory of the slain soldiers.

Indeed, it is sad that so many soldiers died and left behind wailing widows, children and parents. On top of that these soldiers came from poor or middle class families. But those who are shedding tears for the dead soldiers must also see the other side of the story. They need to ask themselves why they never respond to the violence committed by the soldiers on ordinary civilians in the name of so called war on terror? How often candles are pulled to organize vigils for ordinary people who either die at the hands of the soldiers or turned into living corpse because of custodial rapes? Is it not the time to look into the reasons that lead to such tragedies? If yes, then who should be blamed? For that we need to go into the reasons behind this bloody conflict and the response of the state.

The Maoists have been fighting a class war in India since 1967. Chhattisgarh is one of the ten Indian states where an armed conflict has been going on between the paramilitary forces and the left-wing extremists who are seeking to overthrow the government and establish a class less society. Their bases are mainly in the tribal areas which have rich mineral resources. Both the extraction industry and the government have created a situation which has pushed the tribal population towards Maoists.

The tribals who form only eight percent of the country’s population remain exposed to eviction and exploitation by the mining industry. The structural violence has turned many into Maoist sympathisers. To be fair with Maoists, they have provided alternative development model in some of these areas besides sense of dignity to the tribal women, who have always been vulnerable to sexual violence by the forest and the police officers. It is not without reason that tribal women are also part of Maoist squads.

Notably, Maoists have helped in building health centres, schools and water tanks in the liberated zones through volunteer labour to make tribal people self sustaining. Not only that they have helped tribal people to evolve their language and have stood in defence of their right to self determination. Though one can see that there are pragmatic reasons behind these “good deeds” as Maoists need recruits and forest cover to carry on their fight, the fact that the government has created a vacuum by ignoring the needs of the tribals cannot be denied either. The Maoists have only captured the space that was created because of the apathy of the state.

The malnourishment and poverty among the tribal people proves that the Indian establishment has little interest in the impoverished community. Rather it is more inclined towards a development model that suits the rich who are eyeing to displace the tribals to appropriate the minerals to make huge profits. Ever since the extraction companies have tried to expand their operations in the tribal areas the conflict has intensified.

From the tribal perspective, the paramilitary forces are being sent to these areas to force them to leave their land under the guise of liberating forests from the left-wing extremists. For that the bodies of the tribal women are frequently used as battlefield by the soldiers. Custodial rapes are a common occurrence and those who raise a voice of dissent either face death in staged shootouts or tortures. The activists and journalists are discouraged from visiting the areas to have an independent assessment of the situation. In some instances, social justice activists have either been forced to leave or have been slapped with charges under draconian laws after being branded as Maoist supporters.

Blinded by nationalism, the mainstream that is too bothered by the deaths of the soldiers need to wake up and see the way Indian republic is treating its own citizens. An audio clip by Vikalp – a Moist spokesman that was issued following the April 24 attack needs to be contextualised. The clip said that the attack was in response to the sexual violence against tribal women.

If the government does not want to listen to the Maoists, whom it expects to give up violence then at least listen to people like Varsha Dongre – a female jail officer who had exposed the police for sexual abuse of tribal women. Dongre had posted on Facebook that she has witnessed how young tribal women have been subjected to sexual violence by the soldiers. The police officials see unmarried women as potential Maoist insurgents and squeeze their breasts to see if they are lactating. Instead of doing a follow up on Dongre’s evidence, the government suspended her from the job citing rules that prevent officials from making personal opinion about the government policies. However, the officers who have been using social media to intimidate social justice activists continue to enjoy impunity.

This is not to suggest that the Maoists are right hundred percent. A revolution cannot be achieved by killing few soldiers who also come from poor families, but only with their support and the support of the masses. Nevertheless, the blame for this whole situation goes to the Indian leadership that remains indifferent towards the weaker section of the society which has no alternative but to fight back against repression. Never forget that the tribal people have always been fighting for their rights whether they were under British occupation or the occupation of other rulers in the past. Even if Maoists disappear completely, they will still fight if not with the guns then with bows and arrows for dignity and self respect.