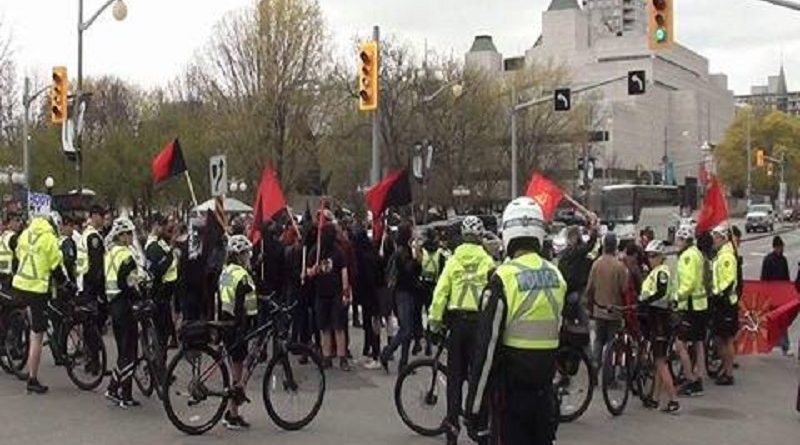 This year, the “March for Life” reactionaries once again had their party in Ottawa crashed as protesters blocked them from their intended parade and then broke through police lines to make a surprise appearance in the middle of their celebration on Parliament Hill. The Revolutionary Communist Party led a red contingent under the banner of proletarian feminism in the thick of the battle to push back those patriarchs who want to seize control over the body of women, and of other gender-oppressed people. We thank the Riposte Féministe, the Montreal-based collective that held the torch this year, and everyone who participated, to ensure those ultra-conservative bigots weren’t given respite this year and look forward to fighting them back every other step of their way.

Hitting the streets with a less favorable balance of force with the police than in the previous year, the counter-march for bodily autonomy rushed the “March for Life” immediately at its first turn, forcing it off Elgin St and cutting its trajectory short under the protection of roaming police bike units. After trying to break through the police lines further, the protesters than managed to make their way to the center of their gathering on the Parliament Hill.

The “March for Life” organizers are a bit squeezed right now under all the backlash. Their arrogant attempt to use the levers of Ottawa city authorities to lift their flag on that same day has caused righteous calls to end the city’s association to their annual parade. They can still count however on the support of many government institutions, such as Ontario’s public catholic schools system which continues to feed the march with its students from across the province under the guise of end-of-year day trips, and the extensive network of conservative politicians, reactionary clerics and fascist groups that are coming together to wipe out what the working-class, the feminist movement and other struggles have built over the decades and return society to the 19th century.

They can also count on their shock troops to carry on every day the fight against access to abortion; in Ottawa, they are allowed by the city to harass abortion clinics every single day. We must salute the recent organizing taking place in Ottawa in response to this; however, we also regret the liberal orientation of the movement, which centers its strategy on appealing to state officials and holding a dialogue with the anti-choice movement. The liberal contingent thus refused to join its forces with the counter-march and failed to break with the ruling ideology that keeps us chained to our oppressors.

In a time when all sorts of reactionary ideologies and straight-up fascist movements are on the rise and taking advantage of deepening economic crisis and popular discontent, it is increasingly dangerous be so complacent towards the right-wing and to be relying on state channels to support our movement. We must build up and organize the power of the oppressed masses to take out our oppressors, irrespective of the whims of the liberal establishment. It is only through a protracted, organized revolutionary struggle that we can attain victory in this class war.

Let’s carry on this struggle to defend the bodily autonomy of the oppressed masses, destroy the March for Life and stamp out its patriarchal supporters everywhere they show up! Let’s continue to fly the flag of proletarian feminism until every institution and idea of patriarchy and gender oppression are smashed into pieces!