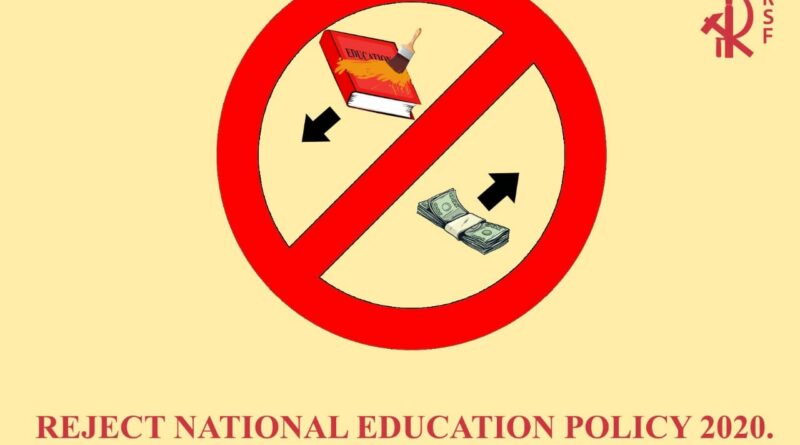 RESIST THE FASCIST ONSLAUGHT ON EDUCATION!

We are all familiar with the condition of students during the Covid-19 pandemic situation. Education shapes the world-view of the society at large and thus represents the way we wish to conduct our everyday lives. Thus, Government policy decisions on education will have a deep impact on our social, economic and political realities. The New Economic Policy paves the way for the privatisation and commercialisation of education. Much before this immediate moment of crisis, the Hindutva fascist government had been privatising and saffronising the education system for its own benefits with the aid of the corporate ruling class. The government has previously distorted the content from the CBSE curriculum in certain cases, and in others cases completely removed chapters to fit their own agenda. These anti-student, anti-poor policies have often driven students to farther ends of life, pushing them into suicide. It is therefore critical to engage and evaluate the kind of changes brought about through this policy to mitigate the problems and challenges it creates.

At the time of drafting of the Indian Constitution, Article 45 of the Indian Constitution vested in itself a promise to the citizens: every child till the age of 14 will receive mandatory education, free of charge, and the state must deliver on that within 10 years. The Constitution (Eighty-sixth Amendment) Act, 2002 inserted Article 21-A in the Constitution of India to provide free and compulsory education of all children in the age group of six to fourteen years as a Fundamental Right in such a manner as the State may, by law. The Right of Children to Free and Compulsory Education (RTE) Act, 2009, is a legislation envisaged under Article 21-A, states that every child has a right to full time elementary education of satisfactory and equitable quality in a formal school which satisfies certain essential norms and standards. In particular, this right never saw complete execution leading to almost half of all enrolled students to be called ‘drop outs’ [Press Information Bureau Data].

On 29th July, Union Ministers Prakash Javadekar and Ramesh Pokhriyal Nishank held a cabinet briefing in which they released the Cabinet-approved National Educational Policy (NEP), 2020. This new policy is a blow that will have an enormous impact on both primary and higher education of this country. The main problems have been highlighted below.

Of the 39931 colleges in India, only 22% are government colleges [All India Survey on Higher Education 2018-2019]. The WTO-GATT dictated Structural Adjustment Programmes are aimed towards the privatisation of the entire education sector – including these remaining colleges. The NMC Bill passed in 2019 also restructured the medical educational sector by granting power to the private institutes to determine fees of 50% of the seats, removing government authority over them. By the logic of “stopping commercialization of education”, they have pushed for an education policy which completely restructures the pedagogy towards more profit-centric goals by increasing the scope of private and foreign investment. In the name of “Indian Knowledge Systems, Languages, Culture and Values”, it is clear that the fascist Hindutva government will attempt indoctrination of conservative and traditional ideas which fit with the “Hindi-Hindu-Hindustan” narrative. The three language system will be implemented in the country out of which two will be local languages. Hindi will be promoted heavily in the non-Hindi speaking states, keeping in mind the need of “national unity”. Sanskrit will be mainstreamed, in spite of it being a language not used for communication anymore and offering a scope in only research. The stress laid on the promotion of Sanskrit is not at all seen in the cases of languages like Pali, Prakrit and Persian which are grouped together.

It has promoted online educational programmes and it officially claimed “[Point 10.10] All ODL (Online Distance Learning) programmes (and their components) leading to any diploma or degree will be of standards and quality equivalent to the highest quality programmes run by the HEIs on their campuses.” NSSO data on internet connectivity and access in Indian households shows us that only well-to-do urban households would have unlimited access to high speed internet. Even post-lockdown, students have committed suicide simply because they did not have access to online classes in many places in India. Most of the students would never be able to attend online classes (requiring high speed unlimited data for video conferencing software) and neither able to download videos. In Kashmir, the authorities have imposed a draconian internet shutdown with only 2G services allowed. This highlights the anti-people character of the New National Education Policy.

Children will be exposed to vocational training [Point 16] post-Standard VI. Since the government has not developed the infrastructure enough to provide jobs, this would lead to a huge pool of cheap labour for the corporates. Even the Multiple Entry-Exit system [Point 11.8] where the students will be handed certificates for dropping out without completing their degree instead of the government attempting to solve their problems, will lead to the same effect – as without degrees, they will not be deemed legitimate for government services. For the sake of profit for the wealthy businessmen, the ever so busy in boot-licking Govt. which is nothing more than a broker for these businessmen does not keep its hands off of institutions of education and healthcare. To pursue the medical sciences for study is unimaginable for the poor and lower-middle class families. The lauded job with a permanent tenure of an engineer is reserved for the select few; while polytechnic and vocational courses suffer from lack of infrastructure along with the jobs in that field being unsteady and wearying.

The casteist Hindutva government has not provided any concrete measures to bridge the discriminatory gap in education between the upper castes and the lower castes of India. The future of the ST, SC and OBC students have been left in the dark, since the NEP only projects lofty goals and ideals to make the bill seem pro-people. While the Supreme Court upheld the 25% reservation in private institutes, no legislature was passed from the Parliament. That is why the privatisation of the education sector will effectively lead to an anti-reservation drive, a goal the Sangh Parivar had set out to accomplish long ago.

The M. Phil degree has been discontinued [Point 11.9]. The M. Phil degree served as the link to the long term commitments to research courses like Ph. D. course. With the discontinuation of the M. Phil degree, the under-privileged students will be less exposed to training for research – actively discouraging them from venturing into the research field. This deepens the existing divide between students from different class backgrounds.

The Policy also aims to centralise education for the profiteers, violating whatever was left of the country’s quasi-federal structure, and attempts to intervene upon the freedom and autonomy of the Universities – “[Point 20.4] A single regulator, the National Higher Education Regulatory Authority (NHERA), will be set up to regulate in a ‘light but tight’ and facilitative manner, meaning that a few important matters – particularly financial probity, good governance, and full online and offline public disclosure of all finances, procedures, faculty/staff, courses, and educational outcomes”. The dissolution of UGC, formation of NHERA, bureaucratization of education through the formation of a specialist Indian Education Service and the role of Registrars reporting directly to the government regarding any major university decisions aims at completely snatching away autonomy from the Universities. It also removes the necessity for the universities to develop their infrastructure. Taking into consideration that it’s virtually impossible to regulate such a large and diverse education sector with one national regulator, it will lead to active encouragement on part of “private philanthropic” groups to engage in activities comprising “quality education”. Formation of regulatory bodies will be encouraged in private Universities and colleges giving them unprecedented freedom to pursue their objective of making profits out of the students.

The dreams that the government is showing to the people, are castles built on thin air. While the carefully worded document has led many to misinterpret its anti-student and anti-people nature, it has laid the foundations of dismantling the education system in the very same document. The fascist Hindutva government is utilising the lockdown to restructure the education system for their needs and profits. What can be done in the Parliament, can be undone in the streets.

We understand that the NEP is a multi-layered document produced by the Hindutva government to alter the course of the education sector of India. We appeal to all progressive and democratic individuals and organisations to unmask the NEP.

RSF opposes the privatisation and saffronisation of the education sector.

RSF opposes the offensive the fascist Hindutva forces have launched upon the education system.