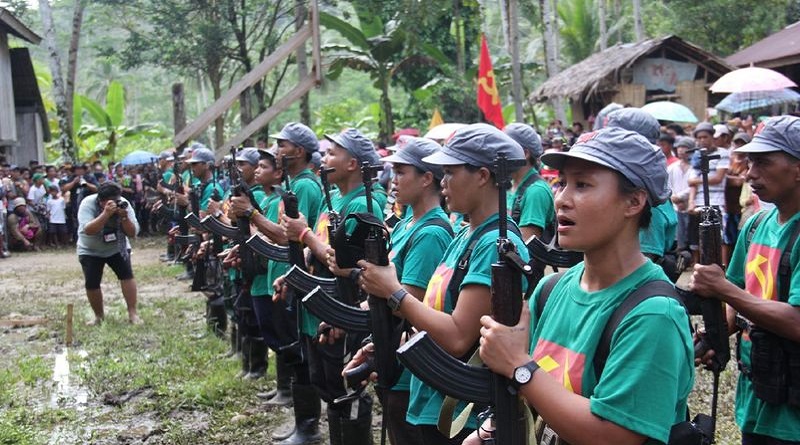 Three soldiers were left dead while another was severely wounded after the Red fighters successfully sniped troops under the 8th Infantry Division conducting Retooled Community Support Program operations in towns that are part of the Samar Bauxite Project by mining company Marcventures Holdings, Inc. The NPA-AOC commends the Red fighters and the masses for carrying out these successful military operations in the midst of intensified military presence.

Last July 1, Red fighters sniped elements of the 19th Infantry Battalion encamped inside Sitio Galutan, Barangay Hagbay, San Jorge. Two soldiers were left dead while one was severely wounded. After several hours, two helicopters hovered the area for the soldiers to collect their dead and to pursue the NPA-AOC which retreated to safety without injuries.

Then on July 2, the NPA-AOC sniped Army troops operating inside Barangay Beri, Motiong. The soldier was killed in action. It took the enemy two hours to retaliate after getting confused by the direction of the firing. Not long after, soldiers encamped in five nearby RCSP barrios pulled out in fear of being the target of more NPA military actions.

Aside from the three towns, the 8th ID has been carrying out massive troop deployment in Matuguinao and Paranas, as well as in nearby Can-avid in Eastern Samar. Since May, troops under the 14th IB, 19th IB, 78th IB 87th IB, Division Reconnaissance Company, and 52nd Cadre Battalion (now converted into a maneuver battalion) have been conducting non-stop combat operations. Last July 14, soldiers used a 105 howitzer to fire at least 64 bombs towards the hills of San Jose de Buan. The NPA-AOC believes that this is part of the Army’s intensified counter-insurgency campaign in Western Samar.

At the same time, it is also meant to pave way for the large-scale mining project by Marcventures Holdings, Inc., covering 12,231 hectares of bauxite-rich land. Soldiers on the ground tell local residents that their operations are to ensure the project pushes through.

In other countries, bauxite mining has caused widespread and irreversible ecological destruction to lands, rivers and communities near the site of the mining operations, the most infamous being the bauxite mining disaster in Malaysia in 2015. If realized, the Samar Bauxite Project may result to grave damage to the lives and livelihood of thousands of Samarnons.

By deploying troops to serve as security force for such a destructive mining project, the 8th ID and ultimately the Duterte regime exposes its greed and anti-people character. Duterte prioritizes the costly and futile counter-insurgency operations to secure the income for big capitalists, at the expense of health care services, education, and livelihood assistance that are much more needed by the people now.#