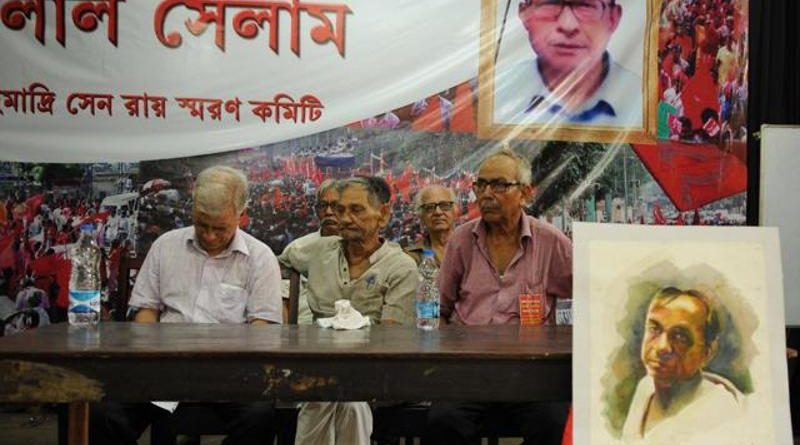 Besides recounting Somen’s role as a ‘communist organiser’, leaders, supporters and sympathisers of the banned outfit pressed for ‘broader unity of revolutionary forces’ to ‘carry forwards the work left unfinished by Somen’.

On the dais were top Maoist leaders Narayan Sanyal and Purnendu Sekhar Mukherjee, along with Chandi Sarkar and Gour Chakraborty. All of them are in their seventies and were released on bail after spending several years in jail.

The event assumes significance, as the Maoist organisation in the state virtually collapsed overnight with the death of politburo member Koteshwara Rao alias Kishenji in an alleged fake encounter in West Midnapore in November 2011.

While Sanyal was a politburo member of CPI(Maoist) at the time of his arrest from Chhattisgarh in 2006, Mukherjee was a central committee member at the time of his arrest from Bihar in 2011. Sarkar was a state committee member when he was arrested in 2005. Chakraborty, was the first overground spokesperson of CPI(Maoist), who was acquitted by the city sessions court judge on July 19 after he was slapped UA(P)A sections and spent more than six years in prison.

Sanyal, Mukherjee and Sarkar avoided reference to CPI(Maoist) during their speeches, but Chakraborty said, “I’m still with the Maoist party.”

In introspection mode, Chandi Sarkar said that they needed to asses why Naxalite agrarian movements by the erstwhile CPI(ML), Maoist Communist Centre (MCC) and CPI(ML)(Party Unity) in the plains of the country ‘failed to withstand the State’s repression’.

“We would not be able to move forward without finding answer to this crucial question,” Sarkar said, hinting that the Maoists were planning to stress on building movements outside hilly and forested tracts.

Messages sent by senior Andhra-based Maoist ideologue Vara Vara Rao and CPI(Maoist)’s former state committee member, Ajit Chakraborty, were also read out in the meeting. Both of them called for ‘resolute pursuance of Somen’s political line’. Chakraborty was released from jail last year and the police believe he has gone underground since then. Jailed Maoist functionary Prasun Chatterjee sent a letter as well.

“Let us pay tribute to him (Somen) by rebuilding the organisation and inching towards completing the revolution,” Somen’s wife, Shikha Sen Roy, said.

Organisers also alleged Murshidabad police arrested a person on Sunday night on charges of campaigning for the event.

On Monday, apart from Maoists and their sympathisers, people representing such outfits as CPI(ML)(New Democracy), CPI(ML)(Red Star) and CPI(ML)(Liberation) and Nagarik Adhikar Raksha Samiti were also present at the event. Representatives of New Democracy and Red Star described CPI(Maoist) as a ‘true revolutionary party’ and preached broader unity among ‘revolutionary forces’.