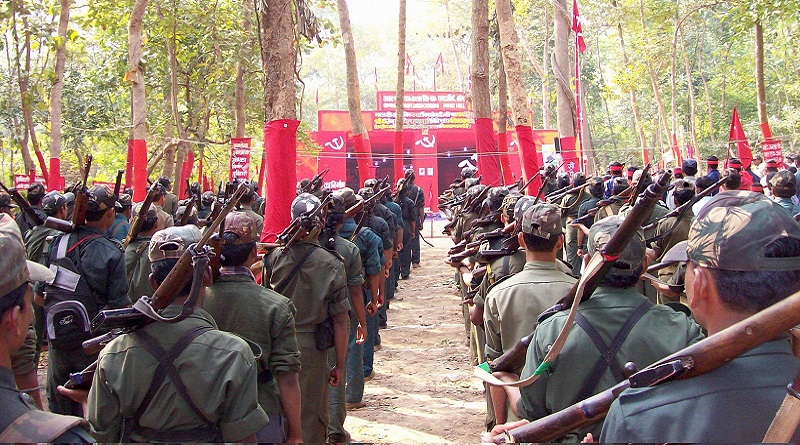 (This is an English translation of the statement, read out in Telugu over a phone call to media on Thursday. This translation follows the full text in print appeared on the website www.virasam.org)

The statements released by police officers till now on the joint attack by Andhra and Odisha police on our camp near Ramaguda village in Malkangiri district in Odisha on October 24 and the massacre of 31 of our comrades, are misleading people as they are completely different from what actually happened there. There is some delay on our part in sharing the facts with people as we are completely encircled by police.

What actually happened was, our squad reached Ramaguda village on October 23 morning and camped there. We slept near the village that night also. In the early morning next day, people saw police coming towards our camp and tried to inform us but the police arrested them and prevented the information reaching us. While we were having our roll-call around 6 in the morning, the police came very close to our camp from two sides. Our PLGA became alert immediately and began firing. Some unarmed Adivasi youngsters, both men and women, from the neighbouring villages, who were with us at that time started to run towards a nearby village. The police shot indiscriminately at those who were running away and also the Adivasis who were fishing in the rivulet adjacent to our camp and killed some. Many of the Adivasis were injured in the firing and some of them were arrested alive. Our squad safely retreated from the camp, under resistance. We did not suffer any physical loss at the camp.

However, by that time our camp was surrounded by the police in two circles. We continued fire for 40 minutes and retreated safely from the first circle. But even then we were surrounded by another circle. All those encircling police occupied the hills and followed our route of retreat and went on firing from all sides. By that time, it was more than one hour into the firing. The police fired thousands of rounds and we hundreds of rounds. In breaking the second circle of the police, we had to cross over to a hillock from another, and there was a plain area in between. The police forces came very close to us during that time. Hundreds of the police forces were in advantageous safe position on the hillocks and we had disadvantage in the plain. The police opened rapid and indiscriminate fire. While breaching that fire from two sides, some of our comrades martyred and many were injured but saved the rest of our comrades. Hundreds of police forces came to our comrades who were injured and unable to move and killed them shooting point blank. Even then some comrades escaped with injuries.

On the next day, October 25, some more additional police forces were brought in and the whole area was searched to prevent our comrades from escape. That day Andhra Pradesh Director General of Police visited the place and perhaps as a welcome gesture, four ordinary Adivasi young men and women who were already in the hands of the police, were killed and another story of encounter was concocted. The persons killed on that day were Komali (Koduruguda village), Shyamala (Pillipoduru), Kaveri Mudili and Lacha Mudili (Daklapoduru).

Another woman comrade who was injured and caught by the police in the encirclement, was killed in front of people in Ramaguda on October 26. Similarly, two other comrades Comrade Goutham and Comrade Naresh, who were indisposed due to injuries were caught and killed in front of villagers at 7 am on October 27, creating an encounter fiction again.

In resisting this onslaught our comrades exhibited utmost bravery, courage, class hatred and spirit of sacrifice. Even when they were laying down their life, they did not allow their weapons fall in the hands of the enemy and passed on the weapons to their companion comrades. In this massacre spread over four days from October 24 to 27, on the whole 31 comrades became martyrs. Nine of them were unarmed ordinary Adivasi young men and women only. Out of all the martyrs, nine were caught alive and four of them were killed on October 24, four on October 25 and one on the day the police forces withdrew.

The police dealt with the dead bodies of our martyrs in most inhuman way. Postmortems were conducted in a hurry, friends and relatives were not allowed to identify the dead bodies, their photos were not displayed and the bodies were kept in ordinary cartons. Family members were not allowed to take the dead bodies of their near and dear and have a last glimpse. Our party humbly pays highest tributes to all these martyrs. Our party shares the grief of the family members, relatives and friends. Our party takes pledge that we will take revenge against the state that killed our martyrs. Our party vows that it will carry forward their cause till the end. All the martyr comrades came into the movement from the most oppressed sections of society. They fought to usher in democracy. They got themselves armed with a personal realization that there is no other way than armed struggle to resolve the problems of democracy. This is not a law and order problem as claimed by the government. This is a problem of 90 per cent of our people. It is a socio economic problem of our people. This problem cannot be resolved by just killing our comrades. People will continue to fight till this problem is resolved. We will develop leadership from all those struggling masses again. We will fill the gap created by the loss of our martyrs. Sacrifices are not new to our party. We have been taking forward the movement through paving the way with sacrifices. In this particular incident, we paid a heavy price for our mistake of assessing the enemy and we humbly state before our people that we are sorry for our mistake. We call upon people to enhance our class hatred in fighting with the enemy and taking forward the cause of our martyrs. We demand that a judicial enquiry to be instituted into the murder of nine ordinary unarmed Adivasi youngsters who were caught alive and killed. We appeal to all people and democrats to condemn this massacre.

The police propaganda that the Cut-off Area is being used as a safe zone by Maoists, is an utter lie. The people in this region, under the leadership of our party, are waging militant movements against bauxite mining and against the government demanding resolution of the problems of the displaced in Balimela Reservoir. Our party, in this area, is taking up the agrarian revolutionary programme of occupying hundreds of acres of land and distributing it to the landless, with the slogan Land to the Tiller. Similarly, our party has taken up several development and welfare activities in this area. Enraged at this, state forces, especially police from Andhra and Odisha are jointly attacking the area for the last many years in the name of combing operations. They killed several people and PLGA members. In the last two years, they are concentrating on killing our leadership. October 24 massacre is only a part of that operation. However, there was no higher committee meetings or plenum at that place at that time, as the police are claiming. Our squad went there as a routine organizational visit to that area. The police forces stealthily reached near our camp by the night of October 23 with accurate information and surrounded us. Getting additional forces by the next morning they attacked us by 6 am. They have taken the help of surrendered, former activists in this. We will certainly review our mistakes that led to this incident and with the help of people punish all those informers and renegades who helped this massacre. Even now, hundreds of police forces are continuing combing operations to terrorise people in this area and people are unable to harvest their ripened crops and take care of their cattle. The leaders of ruling parties in both the states, TDP and BJD, have to pay the price, if the police forces are not withdrawn.