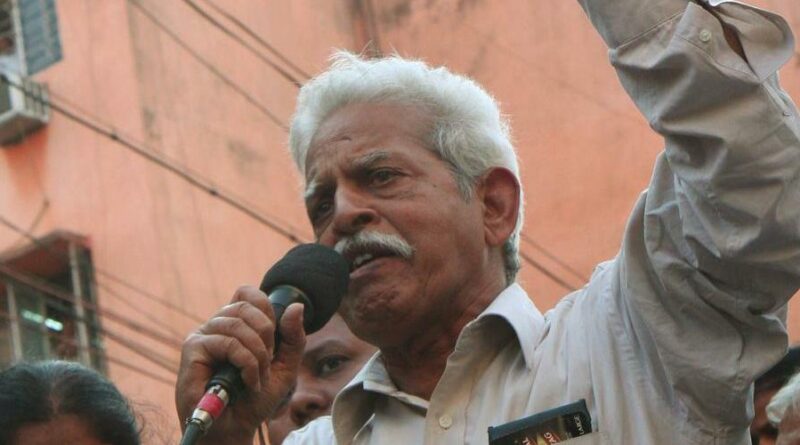 The Bombay high court (HC) on Monday directed the state to allow political prisoner Varavara Rao contact with his family using video calls, while following hospital protocol. Rao is one of the accused in the Elgar Parishad case and he is currently receiving medical treatment at Nanavati Hospital after he tested positive for Covid-19. HC also directed court officials to provide Rao’s family and the National Investigation Agency (NIA) copies of Rao’s medical report, which was submitted to the court last week. The next hearing will be held after two weeks.

While hearing an appeal filed by Rao challenging a special court’s decision to deny him bail on medical grounds, a division bench of justice AA Sayed and justice Abhay Ahuja was informed by Rao’s advocate R Satyanarayan that Rao’s family was concerned about his well-being as they had been provided no information about his health status after Rao was shifted to Nanavati Hospital. In a previous hearing on July 28, a bench headed by justice RD Dhanuka had directed Nanavati Hospital to submit a report on Rao’s health to the court, which the hospital did last week.

Satyanarayan submitted that Rao’s family should have access to a copy of the hospital’s report in order to make arguments for his bail plea.

Additional solicitor general Anil Singh, appearing for NIA, submitted that as Rao’s bail application had been made with reference to his ill health, the petition should be dismissed as Rao was currently being provided the best available treatment.

After hearing the submissions, the court sought to know the current status of Rao’s health as the report was almost two-weeks old. It also directed the state to allow Rao’s family to speak to him through video calls, as had been allowed by an earlier bench, provided all protocol required by the hospital was followed. The bench also directed court officials to give a copy of the report submitted by Nanavati Hospital to NIA and Rao’s family.

On July 13, Rao, who is charged under the Unlawful Activities (Prevention) Act (UAPA) and has been under arrest since August 2018, was taken to Sir JJ Hospital from Taloja Jail after his health deteriorated. In the course of a week, Rao tested positive for Covid-19; was transferred from Sir JJ Hospital to St George Hospital, where he suffered an injury to the head; and was finally taken to Nanavati Hospital, where he is currently admitted. Rao’s family has alleged negligence on part of jail and hospital authorities.