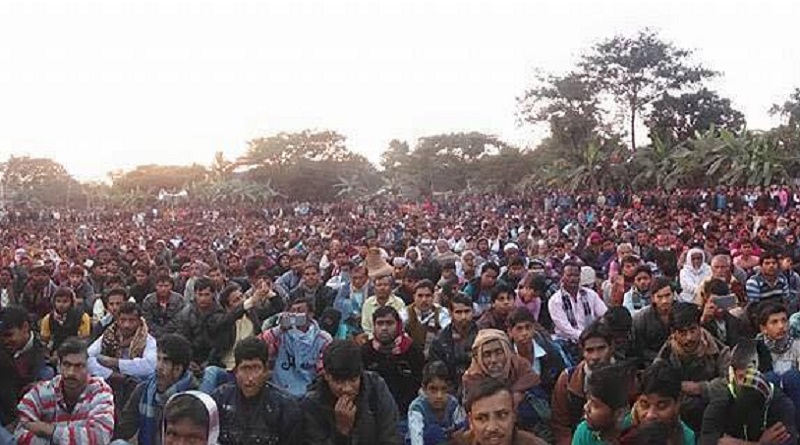 Kolkata: One person was killed and another was injured in the Bhangor area of South 24 Parganas district of West Bengal on Tuesday as clashes broke out between the police and villagers opposing construction of a Power Grid sub-station in the area.

Villagers, who blocked roads and damaged several police vehicles, claimed that police had opened fire on the protesters while police said the firing took place between two groups of protesters in which the casualty took place.

“One person has been killed and another received bullet injury during the crossfire between two groups of outsiders and other residents of the area. We are looking into it,” ADG (law and order) Anuj Sharma told PTI.

When asked about reports of police firing in the area, Sharma said, “There has been no police firing. The police didn’t fire a single shot. The work of the Power Grid station has already stopped. The person was declared dead on arrival at the hospital and the other person is undergoing treatment.”

The person who died has been identified as Mafijul Ali Khan, the police said.

The West Bengal government has declared that the project has been stopped.

According to a highly-placed source at the state Secretariat Nabanna, Chief Minister Mamata Banerjee on Tuesday asked the police to exercise restraint and refrain from opening fire in Bhangor.

In a tweet, Banerjee had earlier in the day said, “No land will be acquired if people don’t want to give away land. Proposed power grid will be relocated if required.” Her party later on removed the tweet and said it should be ignored.

A senior police officer said the police were attacked by the villagers and a few of them were injured by stones and bricks thrown at them.

To bring the situation under control, police resorted to bursting tear gas shells and lathicharge, he said.

Villagers on the other hand alleged that the police resorted to unprovoked lathicharge, teargassing and firing.

State Power minister Sobhandeb Chattopadhyay said “Police did not retaliate, but only chased away the villagers when stones and bricks were thrown at them.”

“There was no reason for the protests as the state government has already halted the project following protests by the people. I had invited them (farmers and villagers) several times for a meeting, but they kept on refusing.

“The state government has stopped the project as per their demand. Still they are creating problems in the area. I do not see any logic behind this… I have doubts about their real intention,” Chattopadhyay said.

“If the sub-station was set up, everyone would have got electricity, whether they belonged to TMC, CPI(M), Congress or BJP,” he added.

On Banerjee’s instruction, forces from Kolkata Police and other commissionerates have been asked to rush to the place to maintain law and order, the secretariat source said.

The Chief Minister also directed the Police to nab around 30-40 “outsiders”, who could be Maoists and backed by a section of Jadavpur University students, responsible for instigating the villagers and farmers in Bhangor for such violent protests, he said.

Police were posted at neighbouring Machhi Bhanga and Tona on Monday night following demonstrations by villagers protesting the setting up of the substation by Power Grid Corporation of India Limited.

The incident has also kicked off a political storm with the opposition CPI(M) and BJP condemning the incident.

“Then in opposition, it was the TMC which had opposed Nandigram and Singur. But, now they themselves are using brute force to acquire land. We condemn this. The police action and atrocity in Bhangor should immediately stop,” CPI(M) Politburo member Mohammed Salim said.

BJP too condemned the police action and said it should immediately stop.

“Police action should immediately stop there. Why is the state government so intolerant and arrogant that it can’t talk to the locals? We will visit the place soon,” BJP national secretary Rahul Sinha said.