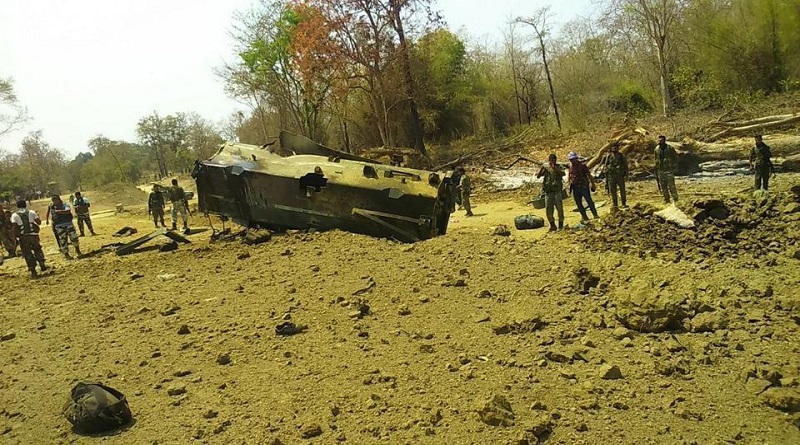 The encounter took place after the Maoists triggered an IED on an anti-landmine vehicle of the 212 CRPF Battalion’s patrolling team was going from Kistaram to Palodi.

Nine personnel of the Central Reserve Police Force (CRPF) were killed and three others wounded in an encounter with Maoists in Chhattisgarh’s Sukma district on Tuesday afternoon.

“The encounter took place after the Maoists triggered an IED on an anti-landmine vehicle of the 212 CRPF Battalion’s patrolling team was going from Kistaram to Palodi,” special director general of police (anti-Naxal operations) DM Awasthi said.

Following the blast, an encounter ensued in which nine jawans were killed and three others were seriously injured.

Awasthi said reinforcements have reached the spot and the firing has stopped. “We are airlifting the injured from the spot,” he said.

The site of the IED blast in Sukma. (ANI Twitter)

Home minister Rajnath Singh expressed his condolences to the families of the personnel who were killed. “I pray for the speedy recovery of the injured jawans. I spoke to DG CRPF regarding the Sukma incident and asked him to leave for Chhattisgarh,” he tweeted.

Sukma has been one of the worst insurgency-hit regions in India, having seen decades of bloody conflict between security forces and Left-wing extremists.

According to documents of meetings held in July 2017, the Maoists were planning bigger but fewer attacks in their stronghold of Bastar in Chhattisgarh to ensure better-planned strikes and stave off mounting government efforts to gain human intelligence.

Senior intelligence officers of Chhattisgarh believe the recent joint operation of Telangana and Chhattisgarh police has rattled Maoist leaders and this attack was done to avenge the a recent encounter of Maoists.

On March 2, 10 Maoists and a constable of elite commando force Greyhounds were killed in an encounter in the forests of Chhattisgarh’s Bijapur district, bordering Telangana.