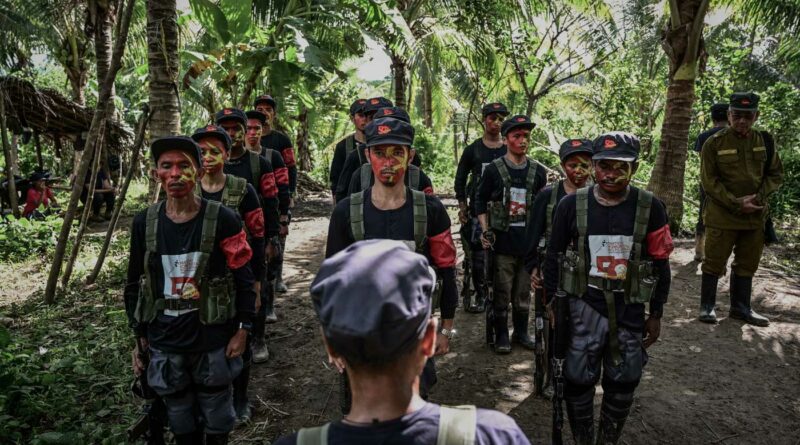 January 28, 2021: Last weekend, the National Task Force to End Local Communist Armed Conflict (NTF-ELCAC) boasted in a press conference in Davao City that it allotted P20 million to fund various projects under its Barangay Development Program for 215 barangays in Region 11. This is part of the P19.2 billion fund which the NTF-ELCAC got under Duterte’s 2021 budget.

1. The band-aid projects of roads, school buildings and health centers under the Barangay Development Program of the National Task Force to End Local Communist Armed Conflict (NTF-ELCAC) merely cover up the roots of peasant unrest in the countryside.

Because these do not address their fundamental demand for genuine land reform and the clamor for respect of ancestral lands, the peasant masses and Lumad people will remain poor, oppressed and exploited. The NTF-ELCAC’s barangay projects only aim to further entrench the AFP in civilian communities in order to secure the economic power of mining companies, big landlords and big agribusiness companies in Southern Mindanao. Under the NTF-ELCAC, the peasant masses continue to be driven away from their land.

The NTF’s barangay projects will fail to quell the growth of resistance in the countryside. The clamor for land and urgent agrarian reforms continue to stir the peasant masses and Lumad people to wage struggles and to support and join the New People’s Army.

2. The Barangay Development Program of the NTF-ELCAC merely aims to smokescreen the bloody dirty war being waged by the AFP against the peasant masses and Lumad people. It seeks to dress up the military as an agency concerned with economic development, education, health and so on. These, however, cannot cover up the reality of killings, unlawful arrests, intimidation and threats, restrictions on movement and economic and community activities, red-tagging and forcing people to surrender and cooperate with the military. Under its Retooled Community Service Program (RCSP), the AFP occupy communities endangering the lives of civilians and committing gross violations of human rights and international humanitarian law.

4. In implementing the Barangay Development Program, the military-dominated NTF-ELCAC is practically taking over the functions of civilian agencies. It is using its funds to direct the priorities of these different agencies. The NTF-ELCAC undermines the principle of “civilian supremacy” by insisting that everyone follow its “whole of nation approach.”

This shows how the military and the defense establishment is taking over the whole bureaucracy in the name of anti-communism. All national agencies and local units of government are being made to prioritize counterinsurgency. They are compelled to “cooperate” with the AFP and comply with all its programs and orders.

5. The NTF’s ₱20 million for 215 barangays (which is so far the only announcement made this January) raises the question where the rest of ₱19.2 billion NTF-ELCAC funds will go.

According to its officials, these funds will go to the “development” of more than 800 “cleared” barangays. Going by the Region 11 allocation of P93,000 for the “holistic development” of each barangay, then the NTF would be spending a total of ₱74.5 million, which is less than 1% of its budget. Even if it releases P20 million monthly, it would be spending only ₱240 million, a mere 1.25% of its budget. So, where really will its billions of pesos go?

The billions of pesos of funds of the NTF-ELCAC is the AFP’s own war chest for electioneering. It can choose to support the pro-military local officials and prioritize their for-show projects to boost their election plans for 2022. On the other hand, local officials will seek favors of the military to have themselves prioritized for funding and thus boost their election chances.