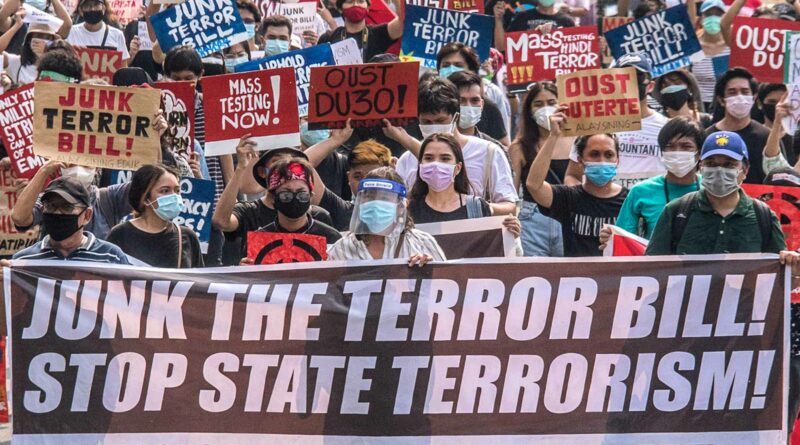 State terrorism under the Duterte tyranny continues to intensify under the wrongly named Anti-Terrorism Law, enacted exactly a year ago today. Duterte’s police and military forces have carried out heightened systematic attacks against civilians as part of his desperate war to suppress the people’s democratic resistance and his scheme to perpetuate himself in power.

The CPP is one with the broad democratic forces of the Filipino people in demanding the repeal of the draconian ATL.

In wielding the ATL, Duterte and his fascist thugs are proving that the widely questioned law is anti-democratic and violates fundamental civil and political rights. The designation of the Party and the New People’s Army (NPA) as “terrorists” was done on the whims of Duterte’s lieutenants on questionable legal grounds.

In designating the CPP and NPA, the real aim of Duterte’s fascist thugs is to use the law and its severe penalties against the legal democratic forces and political opposition who are being red-tagged or accused of consorting with the revolutionary forces.

On the basis of the designation of the CPP-NPA, a number of consultants of the National Democratic Front of the Philippines (NDFP) active in peace negotiations were treacherously designated as “terrorists” by accusing them of being leaders of the CPP. If Duterte will have his way, it is only a matter of time that the ATL will be used against all his critics and rivals.

Emboldened by the ATL, security forces of the reactionary regime have gone on a sustained rampage of extrajudicial killings and massacres across the country targeting primarily peasant and worker mass leaders and activists, as well as peace consultants, human rights advocates and lawyers. Hundreds more have been subjected to unlawful arrests, abductions, harassment, forced “surrenders,” conscription and other forms of abuses by police and military forces.

Most of the victims of violations of human rights have been invariably tagged as supporters of the NPA by the Philippine National Police (PNP) and Armed Forces of the Philippines (AFP) to justify the spate of killings and abuses.

The state terrorist drive of the Duterte regime is in direct violation of prevailing international rules of war which stipulates the protection of the rights of civilians not taking part in armed hostilities. The regime’s attacks against civilians constitute grave war crimes.