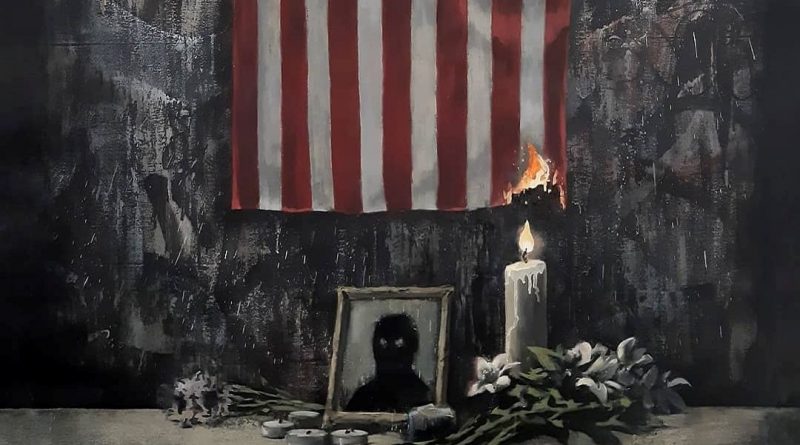 At present, the United States of America is going ahead amid an all-round crisis. For the last one week, the oppressed people in America have taken to streets all across the country. The confrontation between demonstrators and police is going on in the street. Even the white house, the headquarters of the US president, is under the encirclement of the demonstrators. It is to the extent that the president is thought to be insecure in the white house, which is cordoned by the US military. Since last Friday, he has been moved to a bunker in the white house for his physical security. The protests have gone beyond the control of the police in several cities. The National Guard, which is a part of the US military to be mobilized for the internal security in the period of national emergency, has been deployed in as many as 30 states to control the protest. People’s resistance continues in more than 150 cities all across the country. Though efforts have been made to control the revolt the people’s anger does not seem to quell. Where this resistance will end, no one can say.

The USA claims that it is a country that has democracy for all. But in that very country, the American citizens of African origin have been oppressed by white races for ages. Most of them are working-class people. As a result, they are victimized of class exploitation and racial oppression. African and Hispanic Americans are treated as second class citizens in the US. There are dozens of extra-judicial killings of black people in police custody every year. The US is a country in which there is the highest number of prisoners. There are about 2 and a half million prisoners in the US now and non-whites are in the majority. In the US, where the African and Hispanic Americans altogether comprise about 26 per cent of the total population, more than 60 per cent of the prisoners are non-whites. The agony, anger and revolt that are seen in the streets of America today is the continuity of resistance carried on for ages in the US.

The present resistance has erupted after the cruel, ruthless, and extrajudicial killing, in police custody, of George Floyd, 46, an African American national. A policeman Derek Chauvin, with the help of other cops, murdered George Floyd, who was arrested and handcuffed in the charge of using the counterfeit currency to pay a bill, by pinning down on the ground and pressing his neck with his knee. It is said that he was killed by pressing his neck for about 8 minutes and 46 seconds. The revolt erupted after a video that publicly showed that Floyd was not held off even when he was saying “I cannot breathe”. The very revolt has now spread all across the US as an inferno. Many journalists have published news that the cop continued kneeing for 2 minutes and 56 seconds even after he was unresponsive. This heart-breaking scene was repeatedly displayed on TV channels.

The USA has become an epicentre of the Covid-19 Pandemic for the past three months. Till this article is being penned, more than 1.8 million people have been infected by Covid-19 and 160 thousand have died of it. Almost three-fourth of the people affected by Covid-19 is non-whites. According to the government census, more than 40 million people have lost their jobs. Most of those, who lost jobs, are black people. The US state has inflicted another attack upon the oppressed people of the US when they were already suffering from an awful Covid-19, job losses, and deprivation. Of course, the Covid-19 does not have any relation with racial oppression, the longstanding problem of the US. But, people’s anger was on the rise against US President Donald Trump when he stood against people by saying that the economy cannot be sacrificed in the cost of a few lives. The murder of George Floyd that occurred at this backdrop changed people’s anger into this outbreak.

Had Donald Trump wanted to manage the worsening situation after George Floyd was killed, perhaps the people’s anger could not have gone out of control. He did not do that because he was not a statesman but a property dealer who is himself a white supremacist and thinks of personal profit only. Instead of realizing that American cops committed a mistake, he took it as a victory of white people over the black ones. As a result, he threatened it to boot down by American Army after the rebellion broke out. It caused the rebellion to flare up. The rebellion that has erupted now in America has been compared with the rebellion that had burst out after the murder of Martin Luther King, a campaigner against white supremacy. Till now, more than 4 thousand demonstrators have been arrested and a big number of them are injured.

The on-going rebellion in America has been termed as Antifa. In his televised message, Trump has named the protesters as thugs. Not only that, he also accused the Antifa as “a group of anarchist and ultra-left extremists and a terrorist organization.” Besides, he has declared that they should be banned and brought to control by mobilizing the US Army against them. Regarding this rebellion, the way how President Trump presented himself has added fuel to the fire of revolt. Though he has said that this demonstration has been led by a left organization but he has not named it. However, the protest has engulfed the whole country.

Not only has the rebellion spread all across the country, but it has also spilled out in several countries of the world. In solidarity with this revolt, people have organized a rally in London, UK. An anti-racial organization in France has issued a statement and it has held a protest rally against the murder of George Floyd. Besides, people from many countries like New Zealand, Canada, Germany, Brazil, etc. have expressed solidarity to the just movement that the African American people have carried on against white supremacy in America. This trend is on the rise. In Canada, it is reported that the protesters and the cops have had clashes. The people’s rebellion that had burst out against the murder of George Floyd has become an international issue now.

Nowadays, the US is confronting countrywide rebellion amid an attack by Covid-19, rising unemployment, and economic crisis. Some of the social scientists have interpreted it as a rare event in the history of the US. The presidential election is going to be held in the upcoming November 2020. Naturally, these questions will have an impact on the upcoming election. There is a majority of the white race in the US and they are badly racists. Let’s not talk about President Trump, Joe Biden the presidential candidate of the Democratic Party also does not want to frustrate white voters by showing sympathy to the movement against racism. Therefore there is a danger of genocide looming in America where Trump can deploy the military to ‘control terrorists’. The silence on the part of the so-called human rights organizations too in the US supports this possibility.

The pandemic and the recent brutal murder of George Floyd have at once removed the illusion that America is heaven in this age, the people are happy in America, there is justice for the people, and America is a democratic country. See the coincidence of two simultaneous incidents of same nature; the brutal, inhuman, and extrajudicial killing of George Floyd, a black man in America, has pushed back the event of a brutal murder that took place in West Rukum, Nepal, on the dispute of love marriage between lower caste boy and upper caste girl. All this clearly shows all the fallacy of claim that America is a powerful and democratic country that protects the human rights of its citizens.

The rebellion, which is going on in America now, is not a planned and revolutionary rebellion led by a communist party. It is a just but spontaneous revolt. Therefore, it is not going to bring about a revolutionary change in the US right now. But such political events will help polarise the oppressed classes and oppressed races in America and the revolutionaries need to unite them to fight a common enemy, the US imperialism. The recent events in America elucidate how much the US imperialism, a ‘superpower’ of the world, has weakened and how much the internal contradictions are intensifying. It shows that the objective condition is getting favourable for the proletarian socialist revolution to succeed in the US.