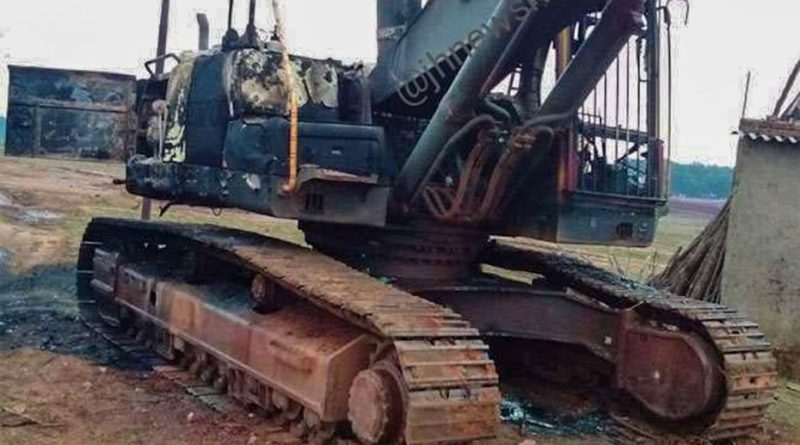 Transportation of bauxite from the Pakhar mines of Hindalco Industries Limited came to a halt after members of the Communist Party of India (Maoist) allegedly torched 11 vehicles engaged in mining activities under Kisko police station limit in Lohardaga district of Jharkhand late on Tuesday night.

Hindalco Industries Limited is a flagship company of the Aditya Birla Group.

The incident occurred around 10pm after half a dozen members of the CPI (Maoist) allegedly set ablaze the vehicles of the two transport companies, worth Rs 5 crore.

The rebels who torched the vehicles reportedly belonged to Maoist leader Ravindra Ganhju’s group, which has been active in the area.

“Altogether nine excavators, a compressor machine, and a JCB machine engaged in bauxite mining were set ablaze by the rebels late on Tuesday night. According to preliminary findings, the arson was carried out by active members of the group led by Ravindra Ganjhu, a CPI (Maoist) leader,” said Jitendra Singh, sub-divisional police officer (SDPO), Lohardaga.

Singh added that vehicles belonged to two private logistic companies, BKB and Balaji Transport, whose services are outsourced by the Hindalco group.

A police team led by Singh began investigations on the spot soon after the incident and an FIR was lodged at Kisko police station based on information gathered from local residents after interrogation.

Ganjhu has been active in the area since the last few years and is wanted in several cases of loot and arson.

He carries a reward of Rs 2 lakh on his head, according to Jharkhand police.

Hindalco group officials refused to comment on the matter.

However, an official said: “The vehicles which were set ablaze by the Maoists were operated by two outsourced firms and we cannot comment on their operations.”

Maoist violence seems to have gathered momentum in Jharkhand amid the lockdown.

This is the second incident of violence after a policeman and a constable were killed when a joint party of Jharkhand Police and Central Reserve Police were attacked by Maoists in West Singhbhum district on May 31.