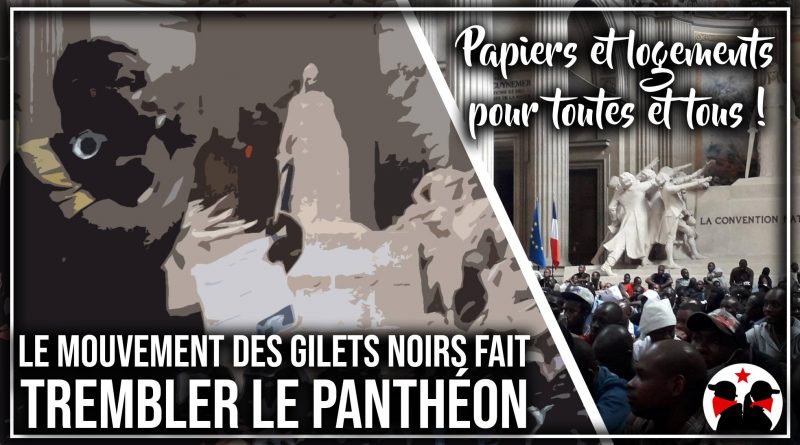 It’s been for some months now, with the intensification of this year’s social struggles and in response to state fascism against migrants, the Gilets Noirs [Black Vests] movement has been founded in Paris. It is a people’s movement of undocumented migrants: workers, homeless and isolated migrant children – supported by the “La Chapelle debout” collective.

Gilets Noirs demands the regularization of all undocumented migrants. They demand the withdrawal of the Asylum and Immigration Act of December 10, 2018 and all other anti-migrant laws. They demand dignified treatment, the closure of detention centers, the end of the hunting and killing of migrants on the streets, in the Alps, at sea or in the Calais jungle.

They demand human living conditions and the freedom to live and work for all.

Today, July 12, 2019, the Gilets Noirs movement took over the Pantheon in Paris, a place with strong symbolism because it represents the heart of the Republic. The Pantheon was occupied by 500-700 Gilets Noirs. Songs, speeches and slogans were heard: “What do we want? Papers! For who? For everyone!”

In response, the cops came to vacate the place. Migrants were forced to leave the Pantheon but refused to be dispersed in a manner to prevent arrest. We heard chants of: “We are all together, no one will separate us.”

The Gilets Noirs requested an audience with Edouard Philippe to put forward their claims without any response from the prime minister, who spent his year violently suppressing social movements. However the police did not charge the migrants, not many arrests have been reported yet, and inside the Pantheon the police have not been violent. The state is clearly afraid of the mass nature of the Gilets Noirs movement and want to avoid igniting a broader mobilization.

On May 19, 2019 the movement also launched a massive occupation of Paris-Charles de Gaulle airport with the same demands. Once again the place chosen is hugely symbolic, because migrants are deported through airplanes departing from this airport.

Comrades of Jeunes Révolutionnaires were also there to support the Gilets Noirs movement and it action in the Pantheon.

The only reason for the mass migration today is French imperialism, which robs and suffocates the nations of Africa, financing and triggering civil wars to steal more and more wealth, invade more and more territories and increasingly oppress the masses. Migrants are fleeing their countries that are in ruins because of the French state, risking dying at sea, being locked in detention centers, facing fascists in the mountains, becoming homeless, losing loved ones and other inhuman situations, because they want a dignified and human life.