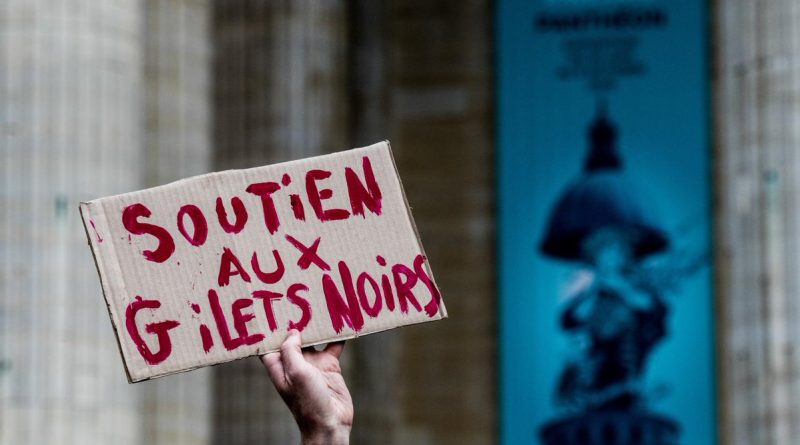 The Gilets Noirs (Black Vests) movement in France, a movement of immigrants inspired by the months-long protest of Yellow Vests (hence “black” in the name denotes the skin colour) took the streets once again in a peaceful protest to demand documentation for all. The protesters entered and occupied the Pantheon to express their demands. The protest was met with severe police violence, arrest and hospitalisation of a number of protesters.

We as the Anti-Imperialist Front believe that the immigration is a result of imperialist policy. Even if the only solution is resistance to imperialism, we can’t ignore the problems of the immigrants in the countries where they saw hope. The refugees had to leave their countries because of political and economical reasons. But they are faced with the fascists and racist conditions in the new life. After this stage, the struggle of immigrants and the worker class of imperialist countries should be in solidarity and unity.

The imperialist system rests on racism and discrimination which guarantees its high profit rates. At the same time the issue has multiple dimensions, all interconnected, which play a key role in reproducing the imperialist order on the world level.

The institutionalised racism and discrimination in the imperialist countries guarantees the higher rate of exploitation of the migrant labour by making the migrant salaries lower than the salaries of the local workforce and maintaining them in poverty as marginal elements of society. This situation is reproduced by the limited access to education and possibilities to improve their social status. Among other things, the solidarity between the migrant and local force is impaired by the fact that lower salaries of the migrant workers are seen as a threat to the living standard of the local working class which cannot cope with the competition on the labour market. As such, the oligarchy achieves two objectives: it lowers the price of labour of the working class as whole and via nationalism and racism it impedes any united action of the working class to react and change the increasing level of exploitation.

Even if the oligarchy was to grant the legal status of the migrants, although their status would certainly improve, due to the mechanisms outlined above the exploitation based on the institutional racism would persist denying the migrant labour the same opportunities as local labour de facto. Apart from the necessity for the solidarity and unity with the local working class in the struggle against the discrimination, the real solution to the problem is to eliminate the cause of the emigration itself. The reason why people emigrate are the imperialist wars and poverty induced by imperialist pillage. As long as the imperialist countries drain the rest of the world of the value its workers produce, as long as imperialism destroys countries by creating national, ethnic, racial and religious divisions and conflicts, there will be migration of the people that follow the flow of the value stolen from them. In that respect, the aggressive immigration policies guarantee the status quo of the situation and more then anything that pressure on the salaries and the living standard in the neo-colonies is maintained at high levels. The consequence is the cheap labour power which produces wealth in the imperialist countries and poverty in the dependent countries.

The struggle of migrant labour is a step forward in weakening the links of imperialism. The solution is not to emigrate but to break the chains of imperialist exploitation in the dependent countries and that requires solidarity and internationalism among peoples of all neo-colonies as well as the support and action of the working class in the imperialist countries.