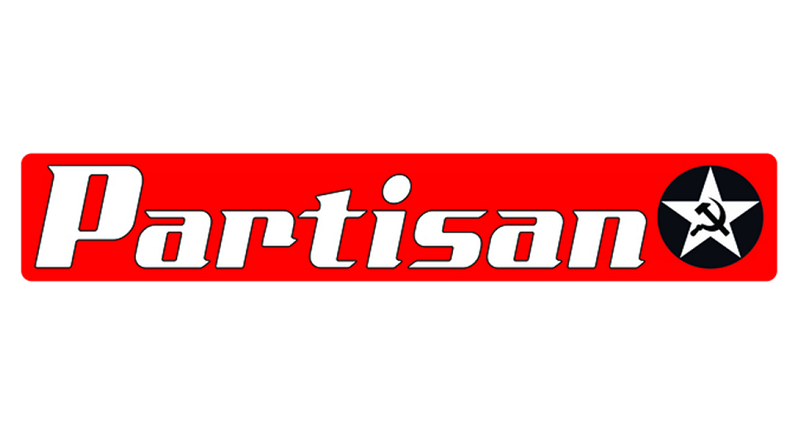 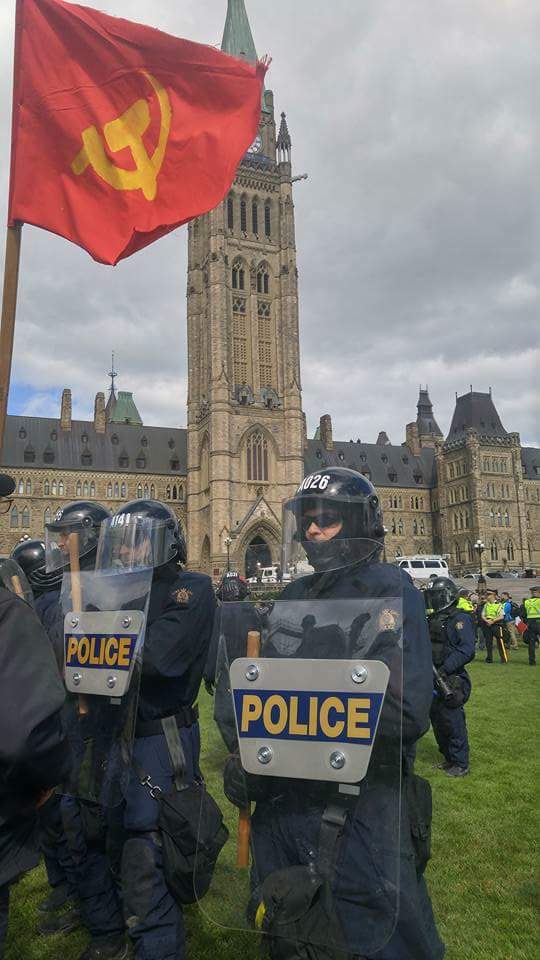 For almost a year now, fascist groups have made an ugly resurgence across Canada, inciting increasing violence against Muslims and other targets of their hatred and scapegoating campaign. In the midst of the anti-Muslim shooting that killed six in Québec City and the rising polarization in the United States, fascists became emboldened and started to organize out in the open. But who are the fascists, and what are their goals? We will discuss these questions here, as well as how to combat them effectively through the anti-fascist movement.

Fascists are ultra-nationalist groups from imperialist countries who support the use of widespread violence to eliminate anything they see as a threat to their “nation”; this includes national minorities, such as Jews, Muslims and immigrant groups, as well as people transgressing the arbitrary gender binary, homosexuals, disabled people, and left-wing militants fighting for the overthrow of capitalism. Historically, fascists usually build themselves by designating scapegoats and playing on the social divisions made possible by capitalism; when they gain a certain strength in the streets, they then hire themselves out like mercenaries to the capitalists and the state to be used to disrupt dissident movements, such as labour unions and national liberation groups; from there, they gradually infiltrate the state, and wait for a prolonged period of crisis to push away the liberal and conservative establishments to take full power.

Fascists are currently far from state power, but the conditions are there for them to organize and grow and to eventually reach a position where they can partner with the state. Domestically, the economy is still not recovering from the financial crisis of almost a decade ago; the majority of workers are struggling with debt, low pay, terrible working conditions, unemployment, and unaffordable rent, food and other costs. On the world level, imperialist powers are stepping up their harassment of other nations and creating bloody conflicts, while the climate crisis is only just starting, leading to the increasing necessity to migrate for millions of people. Muslim-majority countries in the Middle-East find themselves in a particularly rough spot as imperialist powers vie to keep access to their energy sources and to build pipelines according to their interests, leaving millions of people there in a state of unending civil wars. And our states, such as the Canadian government, have no solutions to these problems. In this context, fascists are setting up para-military groups to target designated scapegoats and serve as auxiliary to police forces. In the United States, fascism is already deeply embedded in the state, as thousands of white supremacists make up the ranks of the police, army and judiciary and wield their power to persecute people of colour and other minorities. 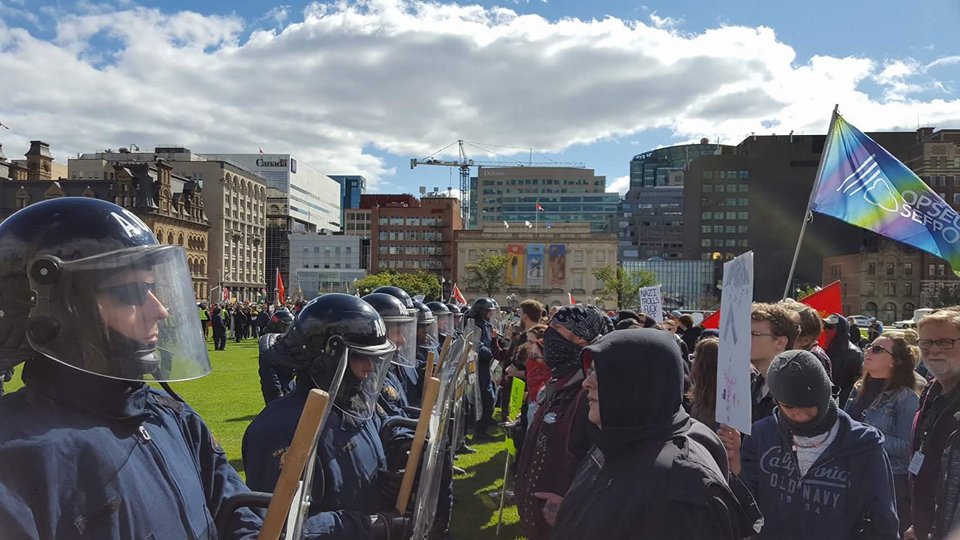 Fascists are sneakily setting themselves up as the only alternative to a rotting establishment which offers no solutions to the population. They single out the liberal elites for their “anti-national” character and transgression of “traditional” values, and try to organize a specific segment of the population on the basis that anyone outside of this narrow national group is responsible for the crisis. Conveniently, they don’t level any criticism at the majority of exploiters, the “national” capitalists who run the country and stand to benefit from having an additional layer of armed gangs protecting their property. Fascists also defend the legitimacy of our state’s anti-democratic interventions in other countries, defending the idea of conquest of other people’s territories and calling for more violence to be dealt towards nations that challenge the West’s supremacy. And they firmly defend the idea of a gender binary and male domination over society, calling for women to be relegated to domestic and reproductive tasks and violently repressing transgender and homosexual people. In short, fascists take up arms to reinforce the unjust relations of domination present in our society, and because of the prolonged capitalist crisis they have the opportunity to crawl back to state power.

Fortunately, the fascist resurgence hasn’t gone unnoticed, in Canada and in other countries, and mass resistance has begun to push them back. We have initiated organizing against fascism in many cities and through this experienced a persistent struggle alongside many other revolutionary organizations and progressive people. So far, with varying degrees of success, we have managed to contain open fascist organizing in many of these places, forcing groups and individuals back to dark corners and provoking splits among the groups and coalitions forming up. The effort by white supremacists to build innocent-looking organizations with vague mission statements encountered enough resistance for groups like the Soldiers of Odin to get torn apart with petty conflicts. Fascists and other racist organizers across the country were identified and exposed as enemies of the people. And battles where thousands of people, from different revolutionary organizations, marginalized communities and individuals came together to fight back, like in Charlottesville in the US, served as a spark to inspire thousands more in many other places, like here, in the territory of the Algonquin nation, to come together to reinforce the fight against fascist violence. We still have much to do but we are gaining strength and experience.

As we continue to live in the suffocating world of capitalism and its unending wars and crises, fascists will unfortunately continue to thrive and possibly win over the support of capitalists; we have seen even in Canada, in the past, the state infiltrate the fascist groups, like the Heritage Front in the 1980 and 90s, and use them to attack and smash revolutionary organizations of the working-class. The Canadian state and others will no doubt treat today’s emerging fascist groups as potential partners in the repression of anti-capitalist and anti-colonial movements, and despite our best efforts, we will have to contend with fascist threats as long as we struggle to dismantle those unjust systems and their states. For this reason, we need to plan for a prolonged struggle against the fascist foes and build a wide front of mass organizations, uniting all marginalized communities, from the diasporas of all oppressed countries to all the Indigenous communities here and all sections of the working-class. The Revolutionary Communist Party will remain committed to this struggle until we are victorious and have smashed the evils of fascism and capitalism and their dirty inner mechanisms.

As things progress, we need to extend our propaganda and outreach efforts to build links with and help organize all the communities targeted by fascist violence, starting with Muslim people who are being treated exactly like the Jews in Europe before World War II. In places where fascist groups are losing steam, we need to support struggles where the balance of forces is more favourable to fascists, and to join the struggles to reinforce the safety of communities from state violence, like building infrastructure to make entire areas safe from forced deportation. In areas where the fascists are gaining strength we need to mobilize the masses to overpower them, starting with helping the most oppressed communities defend themselves. Overall, we need to build connections with all mass organizations fighting to chip away at the power of capitalists over people’s lives, unite all the people committed to ending the division of society into classes, from workers’ struggles to national liberation struggles, from the fight against gender oppression to the fight against police brutality.

Fascism remains an outgrowth of capitalism, and it will continually reappear until we wage the war against the capitalists to the end. We are on our way to gather a powerful mass of forces against fascist groups, let’s not end it there; let’s make the anti-fascist and the class struggle one and the same, drown out the fascists, and move up to smash the capitalists’ power and start to build communism, the only system that will erase all class barriers and ensure freedom and equality for all people.
Unite the working-class to smash the fascists and capitalists alike!