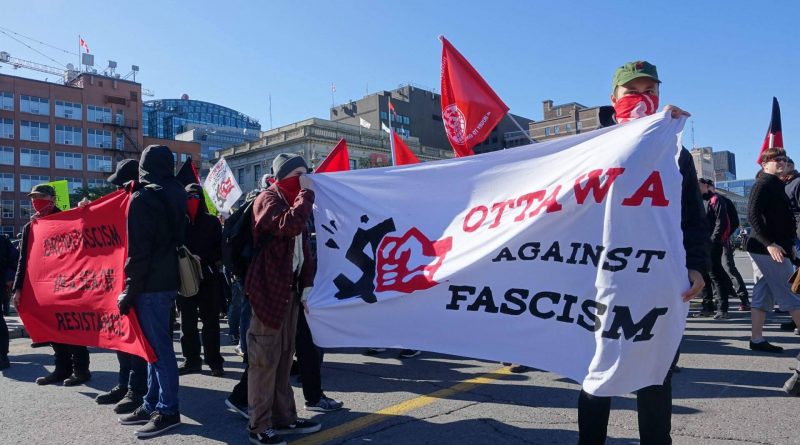 Saturday, September 30th was a great victory against fascist groups and their supporters as we came together as a community to outnumber them by a wide margin. We pushed them into a tiny corner of Parliament Hill, behind dozens of cops in riot gear.

Thanks to the participation of over 200 people, from dedicated anti-fascist militants to young and older people coming to their first ever rally, we were able to march as one large mass wherever the racist, anti-immigration group tried to gather and disrupt their rally. Their Northern Guard and Proud Boys “security detail” were powerless and could only watch aghast as the anti-fascists swarmed their positions and heavily armed police were called in to defend the tiny portion of grass they were left with. No more than 25 people showed up to Georges Hallak’s anti-immigration diatribe.

Our rally also brought in speakers, people who spoke about their experience fighting back neo-nazi groups in Canada in the not so distant past, as well as people representing some of the communities most critically affected by fascist violence, such as our local Muslim communities, trans and queer people, and the Rohingya people of Myanmar; they shared their analysis of the root causes of racist violence found in our society, and made a call to all join up in solidarity and build a united front.

Through our organization and discipline, we also managed to carry out a militant confrontation while avoiding any injury, arrest or serious incident. With the experience we gained on the ground, we can do even better next time!

Congratulations to everyone who participated and made this possible; we encourage you to keep going, and invite you to join our ongoing initiative. We will continue to organize, reach out to the population, hold rallies and other events and build community until we have fully eliminated the violent fascist threat.

And finally, a shout out goes to all our comrades who confronted and pushed back the racist mobilizations in other cities, in Fredericton, St-Bernard-de-Lacolle border point in Québec, Peterborough, Niagara, Windsor and Surrey. Solidarity with all those who faced arrest and violence while trying to stop these racist groups from taking space!