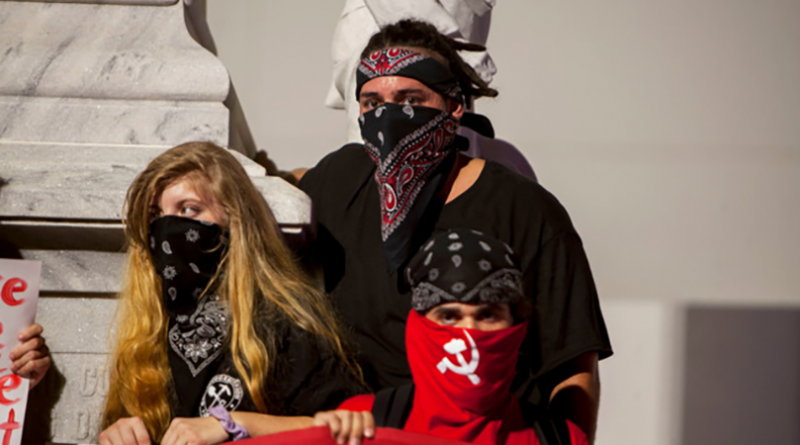 The fascist’s cowardly terrorist attack in Charlottesville has not and will not go unanswered. Our antifascist martyr – Heather Heyer – is immortal! She lives on in the battle against fascism, a battle we will wage to its end. This city will be made a tomb for fascism.

As soon as the news of the attack reached us from one of our comrades on the ground in Cville, the people hit the streets. Overnight anti fascist messages rose all over the city. One such antifa target was the infamous confederate monument that holds the worlds largest confederate flag as it flies over our highways. Revolutionaries defaced the monument with hammers & sickles, antifascist slogans, and red paint.  Other neighborhoods were marked as antifa territory, warning fascists to get the fuck out of our city.

The next day – TMC, the mass organization Suncoast Antifa, and other revolutionaries in our united front made rapid plans to take over the streets. A liberal vigil event had been planned downtown, lacking any focus on our martyr or the political content of her death. Breaking up into cells, we assumed leadership of the event, gave speeches, and shut the streets down as we led hundreds of people on a march across the city to another confederate monument located at the old courthouse. Fascists, including members of American Vanguard (the group responsible for the terror attack in Cville), attempted to follow our march and film some of our comrades. If not for the presence of pigs, this group of cowards would have been ripped apart by the people. Even with their protection present and surrounding our forces on all sides, comrades managed to beat several of the fascist’s phones out of their hands and break them to stop their filming. Chants of “Cops and Klan go hand in hand,” and “1-2-3-4 this is fucking class war, 5-6-7-8 organize and smash the state” filled downtown Tampa. A candle holding event had been turned into an antifascist march.

At various points the bloc outmaneuvered the pigs, forming into wedges to break attempted encirclement, and laying themselves in front of pig cars to stop them from entering our route. Street occupations where the bloc stopped to hold key roads occurred throughout the march, allowing everyone involved to keep pace with the march as water was passed out, and speeches were given on the occupied intersections. As the bloc came within sight of the confederate monument, we ran ahead of the pigs to occupy the territory and cover the monument in our flags and posters. At the occupation the people voiced their outrage at fascist terror and white supremacy. Backwards ideas were struggled against, those carrying american flags and decrying our calls of “fuck the police” were greeted with the anger of our nonwhite comrades as they explained the need for revolution.  Speakers explained to the crowd that this is only the beginning, our struggle against fascism will continue to grow so long as the people support us. We consider this action a small victory and an important step forward.

With our victory, fascist trolls have taken notice of our actions and have launched a pathetic intimidation campaign against us. A swastika has been drawn outside the house of one of our supporters, other supporters have received phone calls describing acts of fascist violence – including glorifying the death of Heather Heyer. Pigs and private security have stationed 24/7 guards on the monument, trying to stop any further action by us. Liberals have also raised 140k for the statue to be respectably and peacefully removed to private property. The neighboring city of St. Pete has preemptively removed its own confederate monument, attempting to avoid a similar incident in its streets. These actions will not be enough to stop the people of Tampa. The struggle will carry on and intensify, fascists and anti-fascists are mutually exclusive opposites and cannot coexist peacefully in this city.

Antifascists in Tampa first announced themselves during pride month, leading an insurgent anti-capitalist bloc through the pride march to the cheers of working class queers in the crowd. Since then we have grown quickly in strength and unity, taking various smaller actions. Before the arrival of TMC and Suncoast Antifa, such actions were completely unthinkable in this area. We are progressing, but much work remains to be done. Our collective is working diligently towards concentric construction – building the basic forms of the party, army, and united front in our work. We have created rules of fitness, diet, and weapons training for all members of our collective. We will become a combat organization of the working class, we firmly reject the revisionist model of “book club communism.” We reject the revisionist denial of the necessity of anti-fascist work. We reject the revisionist model of an “activist” organization. Maoist organizations are partisan war machines created for the destruction of the state and creation of red power. We uphold that the mass line can be applied in anti-fascist work, and we are proving this in practice. Fake communists refuse antifa work, they rub their noses at the people’s struggles and speak of the “mass line” and the “workers” (what they really mean is an idealized version of the old white working class). They see “ultra-leftism” in every militant action. These people are nothing but academics with an activist hobby, they are not communists.

The fascists exposed themselves at Charlottsville, they can no longer hide in the shadows or play innocent as the ‘alt-right.’ We are now in a post Charlottsville period, and it demands of us all uncompromising struggle against fascism. We believe our rapid response to Cville is an appropriate model to build off for the future, and through its summation we are better prepared for street demonstrations and other clandestine work. Maoism in the US must define itself now, at this historical period, birthed in the struggle against fascism. This is a struggle in our streets, in our workplaces, in our neighborhoods. We understand that to combat fascism in all its forms we must establish Serve the People Programs, anti-gentrification programs, and armed paritsan units distinct from our collectives. We are the initiators, and these are the first steps.

We extend our revolutionary greetings to all anti-fascist fighters across the world fighting against a renewed global fascist offensive, especially those in India, Turkey, the Philippines, and Kurdistan. We salute our comrades within the United States: Red Guards Austin, Red Guards Los Angeles, Kansas City Revolutionary Collective, Revolutionary Association of Houston, Three River Reds, and Queen City Maoist Collective. Our solidarity is powerful. The people in the occupied US have risen up in outrage against fascism, it is our duty to fight and win with them. We urge all Maoists to become active anti-fascists and build Maoist guided antifa mass organizations – this is an absolute necessity at this stage of struggle. We will turn the entire south into an anti-fascist zone -seize the times!

Dare to Struggle, Dare to Win!