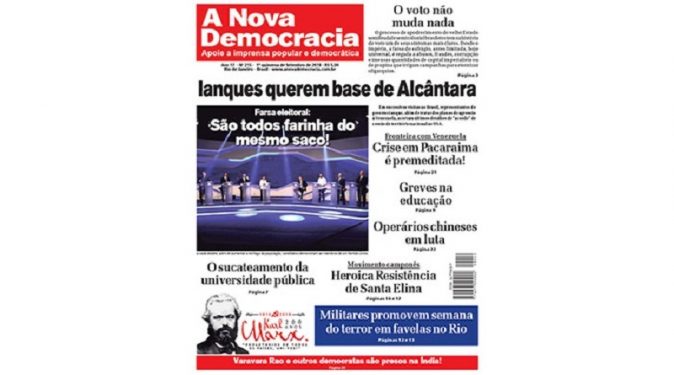 Despite all the farcical staging, the elections and their candidates, with their peculiar cynicism and antics, hide or try to distract the people’s attention from the real seriousness of the country’s situation. Brazil is on the brink of generalized civil war, fueled by the escalation of the reactionary war that the old state wages against the poor people to contain their growing revolt at so many injustices. These injustices come from a demoralized and bankrupt political system, the basis of which is bureaucratic capitalism in a deep crisis of decomposition.

Such is the seriousness of the crisis of the whole system which, as if the growing military intervention in national life is not enough, is combined with the visits of high emissaries of Yankee imperialism in our country.

When we closed the last edition of AND, on August 13, one of these arrived in Brazil. This time it is his Secretary of Defense, James N. Mattis, who fulfilled his agenda in Brasilia and Rio de Janeiro.

According to information from the US Consulate in Rio de Janeiro, “In Brasilia, Secretary Mattis met with Foreign Minister Aloysio Nunes to discuss bilateral defense relations, the critical situation in Venezuela, the progress of bilateral agreements and other issues of mutual interest. Secretary Mattis also met with Defense Minister Joaquim Silva and Luna. They discussed cooperation in the field of armaments, increased interoperability among the Armed Forces, the exchange of personnel and the advancement of collaboration in research and development in the areas of science and technology. ”

The countries are presented on an equal footing, and the issues have already been addressed when the vice president and the US Secretary of State are introduced. They dealt, for example, with the question of Venezuela, for which they advocate as a “solution” a determined multinational initiative, made up of countries like Brazil, Peru, Colombia, Ecuador and Argentina.

Despite all the discrediting and demonization of the Chavista regime of Maduro and so many blatant threats to the sovereignty of the Venezuelan nation and people, we know that Yankee interests, particularly on oil, have been religiously guaranteed by that government, without even a shadow of threat.

But Mattis’ visits to Brazil and neighbors are not mere coincidences. The noise is about Venezuela, but the Yankee plan is for all South America. Fighting conflicts on the borders with Venezuela is the latest trick to insinuate regional security problems. Concealed within this attack is the Yankee determination to install a military base in Brazil, in this case, Alcântara, cynically treated as an opportunity for “collaboration in research and development in the areas of science and technology.” In this endeavor, the USA counts on the favoring of the bandit Temer and on the silent complicity and treason of the candidates for president of the country and their electoral interests.

However, it was in his pronouncement at the Higher School of War (ESG) that Mattis made his mission clearer. He endeavored to soften the hearts and minds of the Brazilian high-ranking officers, and did so with a mellow speech, throwing confetti on Brazil’s actions in World War II, especially on the battle of Monte Castelo and on the imperialist interventions against oppressed countries in which Brazil took part.

ESG was created after World War II, under the guidance of the United States, as part of the “Cold War” strategy. Its appearance was meant to ward off the danger of imperialism’s global defeat, which emerged as a practical short- and medium-term problem when the global correlation of forces entered into a strategic balance between socialism and imperialism, especially with the triumph of the Chinese Revolution in 1949 From this strategy emerged the National Security Doctrine, which has remained in force ever since, according to which the Armed Forces of the Yankee semicolonies would have as their primary task the internal defense of fighting communism, leaving the mission of its foreign defense to the USA. All this is masked as the defense of freedom, human rights, “democracy”, and finally, through the holding of elections.

As if this is not enough, consider all the ties of submission that have gone on for decades, maintained through “programs of cooperation” (read: anti-communist ideological work) irrigated to nourish inputs to their “trainings” in their renowned “strong” academies and famous “Schools of Assassins,” in addition to the joint activities of “war drills in multilateral force operations” of South American countries, under the orders of the Yankee Southern Command.

In his address at ESG, we see that Mr. Mattis has endeavored to be a zealous partner and, why not say it, a menacing defender of our security: “We look to the future, we must build trust today. The US seeks to gain their trust every day, we want to be chosen as their partner, especially when a problem arises – when they need to deal with refugee flows across their borders, when a disaster strikes a South American navy and a submarine sinks, when there are threats to their sovereignty or to their way of life. ”

Revealing the Yankee plans to maintain its military and economic supremacy over the hemisphere, he disingenuously said: “We remain focused on strengthening our military-to-military relationships today because we are looking for a collaborative, prosperous and secure hemisphere – individually and collectively we must maintain situational awareness in all domains: in the air, in the earth, in the sea, certainly in space today, and in cyberspace. This is a time when we share information about our environment with our neighbors; it is a hemisphere in which we focus on national, regional and hemispheric priorities, confident that we may face future surprises, whether they are threats from state actors, non-state actors, even mother nature, or any other opponent who may threaten the future well-being of our citizens that you and I swear to protect. ” How beautiful! What balls!

All this syrup is idle talk. The contemporary world epoch and our history are full of examples of how imperialist alliance and cooperation takes place, using reactionary, submissive, weak, and volatile politicians, businessmen and militaries, to maintain oppression and exploitation over the nation and the people.

The Yankee imperialist lords, to say nothing of the USA, and indeed of the American people, can serve as an example, the fact that they have made two revolutions to assure the unity and independence and the general progress of their Nation. Revolution is something of which we are needy and whose task is pending and delayed, but which has always been fought by our heroic people. And this struggle has been choked in the past with iron, fire and blood by the local Armed Forces, servants of imperialism and the great bourgeois and landowners. But it is a struggle which, no doubt, they believe, we will achieve through the Democratic, Agrarian and Anti-imperialist Revolution, in spite of the lords, their minions and their monstrosities.

Imperialism is a paper tiger!