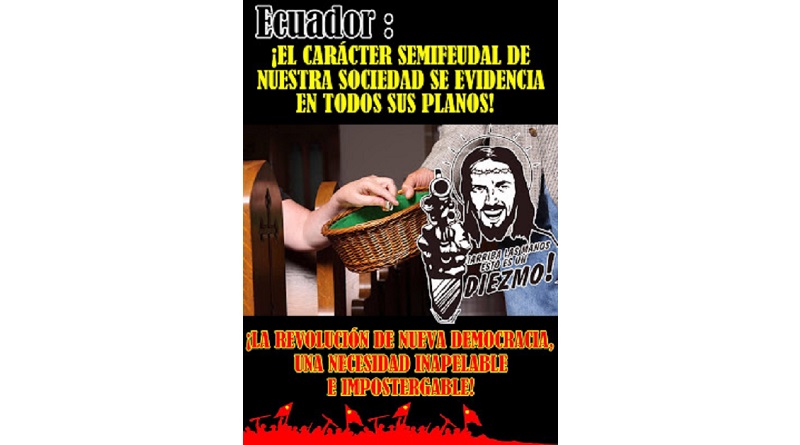 The tithe, despite having been created approximately 24 centuries ago, still has validity in Ecuador and is practiced in most of the productive estates.

Until the middle of the last century, the church and the landlords handled the arrangement of the tithe in an open, legal and treacherous way to appropriate the work of the poor peasantry. Of every ten guachos (grooves of earth), one went to the church; of every ten sacks of potatoes harvested, one was for the priest. Later he was incorporated into the local authority as a beneficiary of the tithe. This arrangement was seen as a way of repaying what the State had invested in the peasantry, that is, the construction of schools, churches, communication routes, etc.

In the twenty-first century, a few days ago in the National Assembly (like a fish discovering water) they publicly realized the existence of this aberration: the tithe. An assemblyman hires his support staff, and because he has done so, the employee must obligatorily give the assembly member part of his monthly payment as a “personal contribution”. Moreover, the worker had to pay for purchases, fuels and others from the employer as a form of compensation for having incorporated him into his workforce.

Of course, the economic crisis, the high rate of unemployment and underemployment; the serious difficulty of being able to get work, stability, etc., pushes workers to accept, in a submissive and servile way, this type of labor relations.

In any case, the assembly members and the media have tried to make us see that it is an isolated event. Absolutely not! In the same Assembly, the collection of tithes has always been present, and there is no assembly member who has not reproduced this form of exploitation with his workers.

But this is not a problem that arises only in the Assembly, it is instituted in all social classes, it is part of the vertebral structure of the semi-feudal character of our society.

Approximately 800,000 construction workers work in the construction sector. Many of them dedicate themselves full time to this activity, others work in a cyclical way, according to the times of sowing or harvesting in the field.

Without fear of doubt, 90% of the workers are hired by intermediaries (senior teachers), who are responsible for taking them to the buildings not before reaching a fully institutionalized agreement. The “senior teacher” retains a part of the worker’s salary as a fee for hiring him, and obviously, the senior teacher or contractor gives the worker some protection and guarantees that he will continue working there or wherever he can place him. There operate other forms or institutions of the most abject feudality, the VASALLAGE AND the SERVITUDE.

Today the tithe in Ecuador is known as the “cut”.

This phenomenon also occurs in other sectors, for example, security staff, which consists of about 300 thousand dens or workers. It happens exactly the same. The intermediary or contractor, in exchange for getting the worker a position in a security company with misery wages (the minimum) and an average workload of 16 hours per day, charges a monthly tax or percentage under the pretext of ensuring his continuity in the company. Suffice it to say that most of these “characters”, intermediaries or contractors, are military and police in active or passive service.

In the countryside there are approximately two million poor peasants. They occasionally work in their precarious properties, the rest of the time they work in other medium or large agricultural properties. The arrangement is the same, the contractor has a network of corruption and exploitation that even reaches the owners of the land. To be able to sustain themselves in these jobs, the peasants give part of their wages or salary. The majority of poor peasants are hired under the form of “the day laborer”, and they give part of their winnings. For example, a peasant makes $ 10 a day, from that pay he gives $ 2 to the middleman – This is a way to make sure that he gets hired again. Obviously, the peasant, to be able to be under the coverage of his employer, additionally performs other types of activities other than those for which he was hired. The servitude, the tithe, and the vassalage converge in the most cruel and miserable way.

In the agricultural industry, on large latifundia of African palm, banana and others, the intermediaries fix the salary with the worker; of this pay they make a “cut” which is distributed among the administrative chain of the company. There are cases in which the “cut” returns to the landowner through the intermediary or contractor which keeps a percentage of the proceeds from the tax, also fulfilling the functions of “collector”.

There have been cases cited in the media in which it is reported, as if it was nothing, that people who come to work for the police or the Armed Forces, are committed monthly to deliver a percentage of their salary to those who provided the conditions to enter those institutions. Of course, these individuals are members of the police and the Armed Forces. In fact, this arrangement is also demonstrated in the payments made by troop members to change jobs, incomes or promotions. A former general commander of police, General Fausto Tamayo, is currently serving a sentence for this type of aberrations.

We could say that the obligatory tithe or “cut” operates in all sectors of the economy. In the public sector this tax is also shown with certain euphemisms: support for the party, for the organization; assurance of the job, etc.; but in the end, they are nothing but that, a feudal expression that survives incarnated in the relations of production in the country.

These forms of exploitation are handled so naturally that, incidentally, they have become anchored in the habit of labor relations among the masses, between the masses and the owners of means of production: businessmen / landowners, which has taken on a kind of normosis; that is to say, it is common, even “normal” for this to occur, obviously, in a society such as ours where semi-feudal vices move between the pockets of bureaucratic institutions, which isn’t to say worker and peasant masses aren’t exploited in the most sinister or creepy way imaginable in other contexts.

Eliminating these semi-feudal relations will not be possible within the “democratic” regime of the old bourgeois-landowning state. Without a democratic revolution of a new kind it is impossible for the masses to eliminate all these old and other evolved forms of exploitation.

THE SEMIFEUDAL CHARACTER OF OUR SOCIETY IS EVIDENCED IN ALL ITS PLANS!

THE REVOLUTION OF NEW DEMOCRACY, AN INDISPUTABLE AND IMPERATIVE NEED!