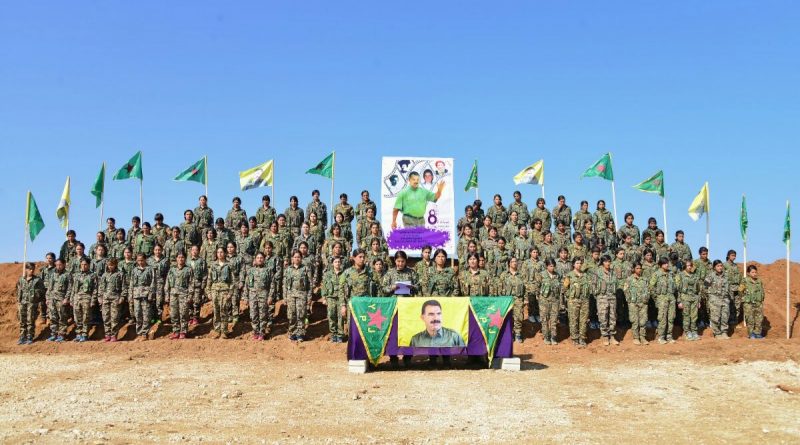 The Women’s Protection Units (YPJ) General Command released a statement marking March 8th, International Women’s Day. In the statement made in front of the YPJ General Command building in Serêkaniyê, dozens of YPJ fighters and commanders were present.

The statement by YPJ General Command on International Women’s Day is as follows:

“On March 8, 1857, 129 labouring women working in factories were burned alive because of the reaction they had initiated to correct working conditions. While the mindset that burns women is trying to keep itself alive in areas today, the resistance that women have initiated against it continues to struggle to destroy this mentality.

As YPJ, we celebrate the 107th World Working Women’s Day to all the world’s and Middle Eastern women, martyr mothers and freedom fighters.

Today the world’s labouring women are leaving behind the 107th year of the International Women’s Day, women are carrying on the March 8th resistance with great courage in the leadership of Roza Luxembourg, Clara Zetkin, Zarif, Besê, Leyla Qasim, Berîtan, Sîlan, Zilan, Sara, Arîn Mîrkan, Özgür Efrîn, Jiyan Rojhilat and Destina Başûr. At this time when women’s resistance is rising, as YPJ, we repeat the promise on this year’s anniversary and express respect to all the martyrs who have fallen in this struggle. In this context, we express that the women’s struggle will grow even more.

Today we see very well that the male mentality and governments see women as property all over the world, especially in the Middle East, and that the government regards women as spoils of war. We have stated that we see this understanding as trying to make the patriarchal system permanent on the woman, so we always have to be for the struggle.

YPJ has shown a relentless struggle in the Rojava Revolution for seven years with its libertarian mentality. YPJ has taken historic steps and made significant progress. It has gained political will and is bringing to life the democratic nation understanding with the perspective which has been developed. At the same time, in these days where it develops the basis of a free and equal life, it continues to crown the revolution with new tactics and styles in the military sense, becoming a great power.

The conscious of “Every liberated woman is a liberated country” is the YPJ’s most fundamental principle and task. YPJ, which managed to save thousands of Arab, Kurdish, Syriac and Yazidi women from the occupation and fascism of Daesh, is also meeting the 107th anniversary of the 8th of March with the goal of liberating Raqqa women and children from the oppression of Daesh. We will gift this achievement to the martyrs of March 8th and all women.

The fact that the strongest woman is a woman who organizes and defends is now much better understood. With the experience of the 7 years of the Rojava revolution and the historical heritage it is based on, YPJ is able to spread this knowledge to all women.

With the occasion of March 8th, we are once again calling on women to unite their freedom struggles and determine the principles of this struggle. For this purpose;

1) Leader Öcalan, who has a national and historical role in the struggle to develop women’s emancipation, has been held captive by an international conspiracy and is under inhuman torture and heavy isolation for 18 years. To raise their voice against it and to reveal their democratic attitude is what every woman should know as one of their main duties.

2) In this historical process, women in the Middle East face a great massacre in their cultural, vital and security areas. Effective combat against the danger of this massacre must be established and a common security and defense mechanism should be established for this purpose. Every woman should have an ideological struggle against all kinds of sovereignty and domination, especially Daesh, and should have a basic duty of growing women’s defense.

3) The YPJ is ready to share its experience with all women with the courage and resistance of the war.

4) Women and children are the most victims of all wars and conflicts in the fields of migration, economy, defense and social life. In order to defend the rights of women and children, every woman must fight and show an attitude against this.

5) In Rojava, YPJ is not only the defense of Kurdish woman, but the defense of all women. Many fighters of different peoples and beliefs in the YPJ ranks have been actively fighting with their own colours, and many fighters have also been martyred in this struggle. This reveals that the essence of YPJ is an internationalist defense force and that this reality should be further enlarged and strengthened.

6) We face serious and great threats as we have made very important achievements as women. We invite all women to strengthen their struggle for the creation of a democratic nation by eliminating these threats. Every woman can gain great achievements.

7) We celebrate March 8 once again with all the women, and we believe that we can destroy this sovereign understanding only by struggling together, that we can create a democratic mentality, moral culture and free life.”