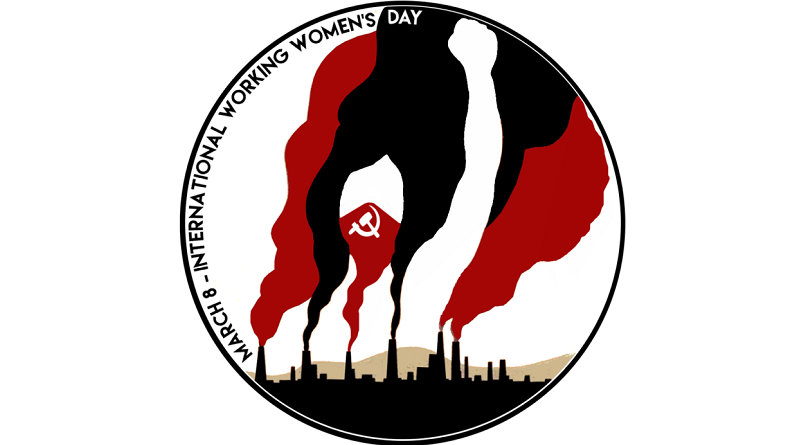 Your blood is a beautiful torrent

That has watered our revolution

With a firm oath of class,

The commitment of a red fighter,

RGA, since our founding, have always used International Working Women’s Day as an occasion to celebrate working-class revolutionary women leaders. We must ask ourselves, however, how we can dare utter the names of Alexandra Kollontai, Jiang Qing, Comrade Norah, and others if we don’t struggle fiercely to put their ideas into practice? We must dare to think, dare to act, dare to struggle, and dare to win. This necessitates operationalizing the ideas of our historic women comrades.

Women in the revolutionary movement have a double burden: they must fight the patriarchy inherent in the capitalist-imperialist system while simultaneously fighting the patriarchy that expresses itself in the revolutionary movement. Postmodernism and its bastard children identity politics, intersectionality, and so on have all reinforced old types of bourgeois feminism while creating new variants of bourgeois feminism. This is because at the core of postmodernism is bourgeois ideology. One aspect of proletarian revolutionary struggle is to strangle and kill bourgeois ideology in ourselves and in those around us in our movement and among the masses.

We must fight to establish proletarian feminism—not only this, but we must operationalize it. This is to insist that proletarian feminism is not simply a materialist feminism; it is not simply a philosophical approach. It is not a thing that exists as an established body of theory—at least not yet. With the publication of “Marxism Mariategui, and the Women’s Movement” in 1975, Maoist-led women’s mass organization Movimiento Femenino Popular issued the first real theory on the topic of what would come to be called “proletarian feminism.” It is up to us to continue in the example of the authors. The very authors of this document were basing their positions not only on their mastery of historical materialism but also on their experience of class struggle up to that point. Carrying the memory of proletarian and oppressed women with them, these very same authors would go on to help launch, and in some cases actively fight in, the people’s war in Peru as part of the Communist Party of Peru.

This practice was the furnace in which Marxism-Leninism-Maoism, principally Maoism, the guiding ideology of the proletariat, would be developed. Of every revolution and revolutionary movement to date, this one contained the highest participation of women—in the party, in the people’s guerrilla army, and in the revolutionary united front. The Communist Party of Peru was the only party to have 60 percent women on their central committee and two-thirds women on the politburo, its highest leading body. This can be understood only as the result of carrying out a correct line in regard to the women’s movement in Peru, which built up women leaders and educated them in revolutionary violence, steeling them as red fighters.

Never for a moment have our theories been allowed to run wild from our practice, and this is certainly still the case. If we want to bless our lips with the names of our great women fighters we must understand the necessity of further developing our theories with none other than revolutionary proletarian feminist practice. We must make good on their threats to conquer the world and liberate women. What does this look like? As with all things, we must examine our own capacity and strive to make it meet the concrete conditions in which we find ourselves.

In Austin the revolutionary mass movement has taken such strides. Revolutionary students and their supporters have stormed the kingdom of institutional bourgeois education, confronting repeat woman-abuser Prof. Richard Morrisett. Speeches were given that called for the creation of a militant women’s organization. Revolutionary LGBT people have identified the connection between their unique oppressions and patriarchy, finding common unifiers, and have reformulated their work and approach to better take their posts in combating patriarchy. On the neighborhood level, oppressed nation women have been mobilized to oppose the invasion of white upper-class parasites who wish to displace them. With gentrification, it is always working-class single mothers who face the heaviest burden of displacement. Women in the movement and among the advanced masses have been trained in regular basic self-defense. Both unarmed and armed self-defense have been mainstays of the local movement. Women and their comrades have been preparing to take this fight forward, not only in the realm of thought but in the realm of class struggle.

The developments taking place are not seen only in Austin either. Kansas City Revolutionary Collective has inspired us greatly with their work on this question; we have seen the rise of the hardest revolutionary women in the Midwest. In Los Angeles our Red Guards siblings are preparing the masses of women and their supporters to defend their community with the formation of a proletarian women’s defense unit for Boyle Heights, as the murder rate of working class Chicana’s is always rising. In Charlotte, NC, our comrades have taken the hard road of confronting postmodern distortions of the women’s struggle, stripped themselves of bad identity politics, and upheld the red banner of Maoism for all to see in their struggles for making proletarian feminism a reality. None of our organizations would be the fighting units they are without the participation and leadership of women.

Maoists must always, step by step, put their words to the test of action. Locally, abusive people have two options: when possible they are educated and corrected and worked out of their mistakes, converted from a patriarchal thinker to a proletarian feminist thinker, always according to our capacity to transform them in class struggle. Men, even working-class men, are indoctrinated in patriarchal bourgeois ideology and will likely commit some errors. To become full revolutionaries this bourgeois ideology must be confronted ideologically by an organized political force. In some cases blood crimes demand blood, and physical transgressions require physical confrontations. Rapists, abusers and other anti-women predators should face the violent wrath of revolutionary women. In all cases the great numbers of women in our class and their ability to live and act as revolutionaries are the first consideration. In order for women to rise from our class as leaders of our class, their ability to rebel must be fully grasped, respected, and defended. Anything short of this is hollow liberal feminism, running counter to the interests of the women of our class.

This March 8, it is not enough to simply talk about the women heroines of our past great communist struggles. These heroines must inspire us now to be more and more daring, to fly in the face of patriarchal social and economic relations, to sweep the mountains and assault the sky. We must remold ourselves as a movement in their fire. We call upon all supporters to strike out against the patriarchy in new and creative ways, to form women’s defense groups, to organize rectification for those who have made mistakes or retaliation against abusers who have crossed firm lines. Institutions and businesses that prey on women should not be spared. We call for the masses to be organized step by step to attack them. Ultimately if we want true equality for women we must struggle tirelessly for revolutionary communism. We must see the type of party built here that was accomplished in Peru, which is one that unlocks the full revolutionary potential of proletarian women. We must envision women at the head of this project. We must recognize, uphold and defend our women leaders who have unwaveringly served our new  and growing movement. On International Working Women’s Day we honor them and the undefeatable women of the working class.