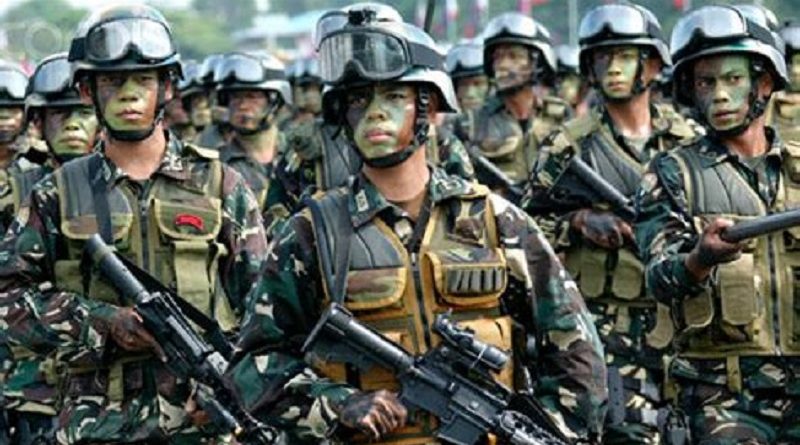 Upon the orders of their master Rodrigo Duterte to sow tyranny upon the people, the Armed Forces of the Philippines (AFP) and Philippine National Police (PNP) have become rabid dogs attacking without rhyme or reason. They are victimizing random civilians in carrying out their evil plans against the revolutionary movement.

Duterte’s fascist soldiers have been terrorizing civilians in North Eastern Mindanao Region (NEMR) this year, to weaken and damage the revolutionary movement and terrorize the struggling people.

Recall that last February 25, 2018, 26th IB and PNP forces arrested civilian Roger Salinas Gonzales in Brgy. Del Monte, Talacogon, Agusan del Sur and fabricated that he is a commanding officer of the People’s Militia. According to the relatives of the victim who witnessed the arrest, soldiers planted a .38 revolver to make it apear that he was armed. They immediately went on air to brag about capturing another official of the revolutionary movement.

Meanwhile, 75th IB troops shoot and killed a civilian in Sitio Kabaohan, Brgy. Bunawan Brook, Bunawan, Agusan del Sur last February 15, 2018. The victim was Keynard Barrientos, 23 years old, single and resident of the area. The AFP immediately proclaimed that the victim was a member of the NPA and was killed during an encounter.

Last February 14, in Brgy. Manat, Trento, Agusan del Sur, 75th IB forces ambushed and killed Aaron Notarte, a farmer, while he was on his motorcycle on the way to his farm carrying coffee seedlings for planting. The 75th IB immediately proclaimed that the victim was a member of the NPA.

Last February 9, 2018, Mario Labao, a CAFGU member, killed Datu Guillermo Tiambong a leader of the Mamanwa tribe, in Brgy. Buodlingin, Alegria, Surigao del Norte. The 30th IB and 402nd Bde tried to cover-up the crime and maliciously charged it to the NPA. They even used the supporters of Mario Labao, accompanied by the AFP, to hold a rally against the NPA.

Last February 2, 2018, the AFP accompanied by the police, arrested Leonida Guao in Brgy. Bading, Butuan City and accused her as being the finance officer of the Mindanao Commission of the Communist Party of the Philippines (CPP). But in truth, she was a civilian and small businesswoman. According to the spokesperson of the National Democratic Front of the Philippines-Mindanao (NDFP-Mindanao) there is no such designation of finance officer in the Mindanao Commission, as such, it was a trumped-up accusation made by the AFP/PNP against the victim.

In January 2018, without mercy, 29th IB forces strafed the home of Jinky Asay in Brgy. Bangayan, Kitcharao, Agusan del Norte. Their two passenger motorcycles were riddled with bullets destroying these and resulted to them losing their source of livelihood.

These are but a few among the many cases of abuse and violations of human rights committed by AFP/PNP forces in the region since the extension of martial law in Mindanao, implementation of Oplan Kapayapaan, declaration of the NPA and CPP as “terrorists” and boasting of annihilating the NPA by the year 2018. Failing to prevent the advance of the revolutionary movement and amidst the worsening crisis in the Philippines, Duterte has seemingly lost his mind, making statements granting the fascist AFP/PNP license to commit crimes and persecute the people.

But the US-Duterte regime and the AFP/PNP are sorely mistaken in thinking that the people will continue to cower in fear and he can establish his ambitious dictatorial rule in the Philippines without opposition. It has instead enflamed the people to resist and opt for armed struggle to achieve social justice. Duterte will suffer the same fate of Marcos, overthrown by the thunderous uprising of the people, his name despised in the pages of history.

NDFP-NEMR call on and challenge the people in the region, turn fear and doubt into blazing courage to expose, fight and frustrate all manners of deceit and oppression. Let us stand up for our rights and just interests to bring forth genuine justice and freedom.

The NPA will launch many tactical offensives against the brutal AFP/PNP forces to defend the people and give justice to the victims of fascist abuse.