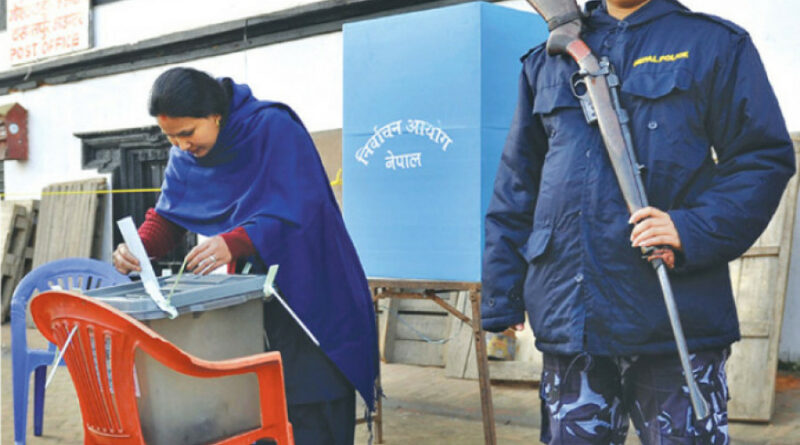 Kathmandu, November 6, 2022: Election security was not much of a concern for the Election Commission until a few months ago, as they didn’t consider the political parties that had threatened to boycott the upcoming polls a serious threat.

But now, with the Netra Bikram Chand-led Communist Party of Nepal announcing to actively boycott the November 20 polls, the election body and the Home Ministry seem worried.

The Home Ministry and the Election Commission had otherwise maintained that intra-party and inter-party rifts might emerge as the bigger challenge.

Khadga Bahadur Bishwokarma, spokesperson for the Chand-led party, earlier this week said his party would actively boycott the upcoming federal and provincial polls and would retaliate if the government tried to use force against them.

“Our party has decided to totally disregard the November 20 federal and provincial polls to be conducted by the capitalist government,” read the statement issued by Chand. “We have decided to give an appropriate response if the state suppresses our party’s publicity programmes.”

A recent central committee meeting of the party has decided to launch campaigns to publicly “expose the ill intention of the elections” through wall paintings, leaflets distribution, rallies, gatherings and by appealing to the people not to take part in the vote.

The threat of the Chand-led party, which resorted to violence until it joined mainstream politics in March last year, has government officials worried about possible disruptions.

The government has thus started arresting the leaders and cadres of the parties that announced a poll-boycott. On Wednesday, the police arrested Bimal Niroula and Mahesh Shrestha from Belbari of Morang in connection with a possible threat to the polls. The two leaders of the Mohan Baidya-led CPN (Revolutionary Maoist) have been accused of involvement in anti-election activities. Baidya’s party has also decided to boycott the polls.

Of the 68 parties that are contesting the federal and provincial polls, 48 have presented the closed lists of their candidates for the Proportional Representation category of elections.

According to sources at the Home Ministry, there are 10,891 election centres and 22,226 polling booths. Around a third of the centres—3,080—are “very sensitive” and 4,420 are sensitive, with the remaining ones being less sensitive in view of security.

However, Basanta Bhattarai, information officer at the Home Ministry, said the security sensitivity of the election centres could change in view of the incidents in the lead-up to the polls.

Bhattarai said the activities of the political parties that have announced to boycott the polls could be an important indicator for the government to list out very sensitive election centres.

At least half a dozen Communist parties have announced to boycott the upcoming federal and provincial assembly elections.

Organizing a joint press meet on Friday, two student wings of the Baidya- and Bastola-led parties appealed to the people to boycott the upcoming polls.

As the federal and provincial polls are happening in a single phase across the country, the government will have a tough time managing security on the day.

The ballot papers have already been transported to four provinces—Gandaki, Lumbini, Karnali and Sudurpaschim.

Security experts have said the announcement by the Chand-led party may not be a big threat, but it can have significant psychological effects on security bodies, the Election Commission and the government.

“The party led by Chand may cause some disruption in some places, but I don’t think it can thwart the polls on a large scale,” said Ganesh Adhikari, former chief of the National Investigation Department. “The party has lost its strength due to splits and has no strong organizational bases, but it can certainly create some psychological threat.”

Adhikari, however, said the major threat to the upcoming elections comes from a lack of security personnel for the polls and there could also be some threat due to internal conflicts within the major political forces.

“We all know security-related deployments are a challenge in single-phase elections, but the country has made its decision,” Adhikari told the Post. “In case of an incident, a response may take some time.”

Though the government has already appointed 115,000 temporary police, they are not adequate for poll security as they don’t even have basic training.

According to Home Ministry sources, the government is preparing to deploy a total of around 300,000 security personnel including 75,000 Nepal Army (in the outer ring), 65,000 Nepal Police, around 32,000 Armed Police Force besides 115,000 temporary police.

A joint election operation centre led by a joint secretary of the Home Ministry will come into effect from Sunday whose remit will include deployment of security forces in an integrated manner, an official of the Election Commission said.

The government, however, has been taking stock of the activities of the political parties who have announced to boycott the polls.

“We have been closely monitoring their activities as they cannot prevent anyone, physically or psychologically, from voting,” said Bhattarai, the information officer at the Home Ministry. “Though the Chand-led party has threatened to thwart the polls, we have not envisioned any major threat from the outfit yet. We will act against those trying to disrupt the polls.”