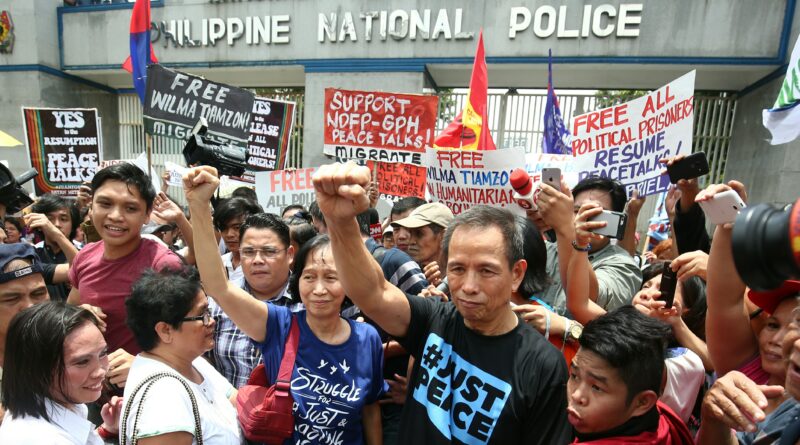 Manila, May 13, 2021: The anti-terror council (ATC) has designated as terrorists 19 people it alleges to be central committee members of the Communist Party of the Philippines (CPP), authorizing the Anti-Money Laundering Council (AMLC) to start freezing their assets under a law whose constitutionality is being challenged in the Supreme Court.

Of them, Baylosis is free after he was cleared in 2019 of charges of illegal possession of firearms and explosives.

Sison is exiled in the Netherlands. The Tiamzon couple have been at large since President Rodrigo Duterte ordered their rearrest following the collapse of the peace talks. The couple was convicted for kidnapping in November by a Quezon City court.

Ladlad and Silva were arrested in 2018 for charges of illegal possession of firearms and explosives.

“Based on verified and validated information, the ATC found probable cause, as defined in the anti-terror act, warranting the designation of the following central committee members of the CPP for violations of Sections 6, 7, 8, 9 and 10 of the ATA,” the resolution said, which was signed by Executive Secretary Salvador Medialdea as the council chairperson.

The list of designated 19 persons are the same people whom the Department of Justice (DOJ) sought to proscribe in a still pending case before the Manila Regional Trial Court (RTC). The DOJ itself trimmed the original list of 600, and took away Baylosis, Ladlad, Silva, and the Tiamzons.

In February 2019, it was the court that said only Sison and Antonio Cabanatan have “unassailable links” to the CPP-NPA. The court left the two in the proscription case but only for the purposes of serving summons.

In the February 2019 resolution of Manila RTC Branch 19, the court removed Baylosis from the proscription case because “he had done more than give notice of severance of [his] association with the CPP-NPA; [he] had denied being actually members or officers of said respondent-organizations.”

Proscription is the distinct court process to judicially declare a group as terrorists. Designation is a purely anti-terror council power, done on their own determination with no notifications of their hearings. Only after designation are the subjects notified, after which they can seek to delist.

Designation is one of the most contentious powers of the feared anti-terror law, as Associate Justice Benjamin Caguioa pointed out in oral arguments that the designation by an executive body made up of Cabinet members “already achieves the purpose of proscription.”

The designated people are accused of planning, conspiracy, proposal, and inciting to commit terrorism, as well as membership in a terror group.

The only effect of designation would be the freezing of assets, the government has maintained. Lawyers from the Office of the Solicitor General (OSG) also repeated this to the Supreme Court during oral arguments.

Under Section 36 of the law, the AMLC is authorized to immediately “freeze without delay” the “property or funds that are in any way related to financing of terrorism.”

The freeze order of AMLC will be effective for 20 days. Before the period lapses, AMLC can seek authority from the Court of Appeals (CA) to extend the freeze order for a period not exceeding 6 months.

The designated people can also go to the CA to challenge the basis of the freeze order.

The ATC has also designated as “terrorists” 10 people it believes to be members of the Abu Sayyaf Group.

Renato Reyes of the progressive group Bayan said the designation was “arbitrary, has no clear standards, with no evidence presented and no specific terrorist acts cited.” Reyes noted that “several of those designated are publicly known consultants in the peace process.”

“How can ‘terrorists’ engage the government in peace talks? Doesn’t that make the designation absurd, a retaliatory act in the aftermath of the scuttled negotiations?” said Reyes.

“It is just a sweeping accusation, no different from red-tagging, that violates the rights of those designated. Those listed will also suffer the freezing of their bank accounts, a direct injury. All of this was done without due process,” said Reyes.

Under the Implementing Rules and Regulations (IRR), the designated people can seek to be delisted.

In December 2020, the ATC designated the CPP as a group, with AMLC moving to freeze “related accounts.”

PILC said the designation of the peace consultants “closes possibilities for a peaceful resolution of the root cause of the armed conflict.”

“Not only had they shown long track records in the legal democratic movement, the Manila court aptly dropped their names from the proscription petition under the Human Security Act because there was no evidence linking them to terrorist organizations or activities,” said PILC.

“How can the anti-terror council, three years hence, claim to have ‘verified and validated information’ against these peace consultants when it has already been proven in court that there is none?” PILC added.

“The military organization further conveys its full confidence to the ATC’s decision which was carried out based on verified and validated information,” Sobejana said in a statement on Thursday.

He added that the list will allow them to further protect the people by focusing the resources of law enforcement agencies on the designated individuals.