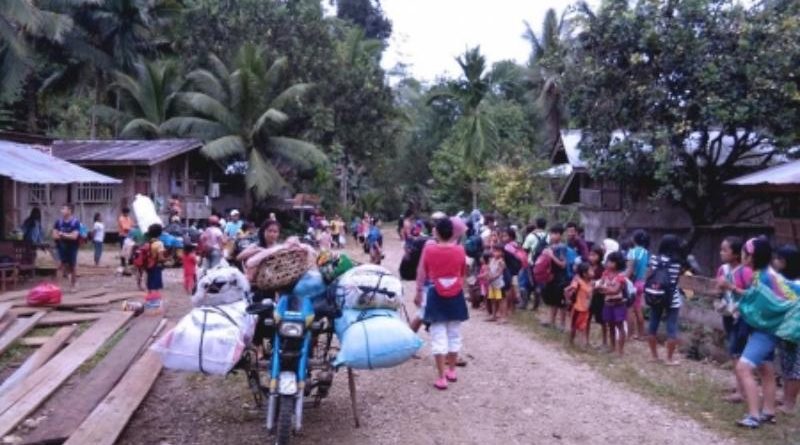 In the three days that Red fighters launched tactical offensives against US-Duterte’s armed forces around the region and safely released a prisoner of war in Davao City, AFP troops added yet another crime against the people in forcing almost 200 hundred Lumad and peasant families to flee their homes and livelihood and surrender as NPA members or sympathizers in Tarragona, Davao Oriental.

Since early July, troops of the 67th IB have launched combat operations in the hinterland barrios of Tarragona and sowed terror with their peace and development teams in civilian communities. PDT troops conducted psywar, harassment and interrogation and carried out food and economic blockade against Lumad and peasants.

On July 26, while on a mobile checkpoint in Sitio Tagsagawong, Brgy, Tomoaong, Tarragona in Davao Oriental, a unit of the ComVal – Davao East Coast Sub-Regional Command intercepted and tried to flag down a vehicle at around 4:00 in the afternoon. When the vehicle instead reversed course, the NPA command fired a warning shot into the air. The passengers inside the vehicle answered with a volley of gunshots forcing the NPA unit to return fire. After several minutes, the armed passengers alighted the vehicle and scampered away. Red fighters were able to seize 1 Glock 9mm pistol, hundreds of rounds of ammunition, several handgun magazines and other military and personal possessions from the abandoned vehicle. At least 2 of the absconding policemen were severely injured during the firefight.

Masses disclosed that the PNP personnel engaged by the NPA unit were detailed as escorts of Governor Nelson Dayanghirang and also moonlighted as protectors of drug syndicates in Davao Oriental.

Immediately after the incident, July 27, the 67th IB forced 135 families in the three sitios of Brgy. Tomoaong, threatening that if the civilians do not evacuate or if they were to sustain yet more casualties, the soldiers would retaliate against the Lumad and peasants. The evacuees are currently taking shelter in the barangay gymnasium while others have gone to families in nearby towns. For almost a week now while the civilians are in the gymnasium, the 67th IB has been hounding barangay officials to compel the residents to surrender as either members of the NPA or sympathizers of the revolutionary movement.

Only two years old, the US-Duterte regime has unleashed the full potential of the AFP, PNP and their paramilitaries as its most brutal machinery of terror, suppression and corruption in the region and elsewhere in the country. As the growing unrest of the Filipino people shakes Duterte’s tottering hold to power, NPA units are making the AFP answer to its escalating fascist crimes to the people.