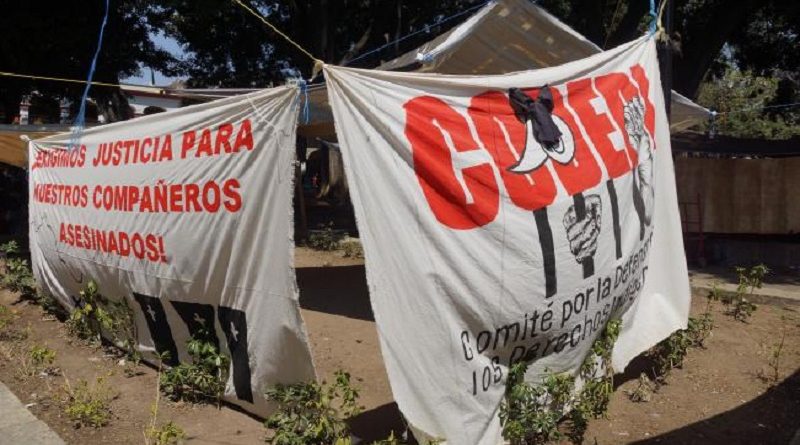 “CORRIENTE DEL PUEBLO SOL ROJO” expresses the most energetic rejection from our militancy and leadership structures to the wave of aggressions registered in recent days against several sectors of the people’s movement in Oaxaca.

Particularly the murders of Comrade Abraham Hernández Gonzáles, Coordinator of the CODEDI in the Salchi Cuatunalco village, Pochutla, on July 17, and more recently of the Comrade Rolando Crispín López, member of the Communal Police of the Álvaro Obregón community, Juchitán, on July 22.

We are sure that both events answer the old bourgeois-landowning state purpose, since the big bourgeoisie and the large estates are in cahoots and subordinate for the policy of land eviction and plundering natural resources imposed by imperialism with its so-called “Special Economic Areas”, which find strong opposition and resistance from the native peoples and the democratic and revolutionary people’s organizations.

Both murders have been perpetrated by paramilitary groups in La Costa and Istmo of Oaxaca, and in the same way than other aggressions carried out against the movement, such as the forced disappearance of our Comrade Doctor Ernesto Sernas García on past May 10, they find the most brazen silence and secrecy by state and federal government authorities, which allows the wide people’s movement to assert: “It was the state!”

We give strength to the call for unity of action to confront and defeat the enemies of the people and to impose people’s justice.

Stop state terrorism and war against the people!

Murders will be avenged!

Because they were taken away alive, we want them alive!

May the workers rule the Homeland!

With Sol Rojo, People will win!