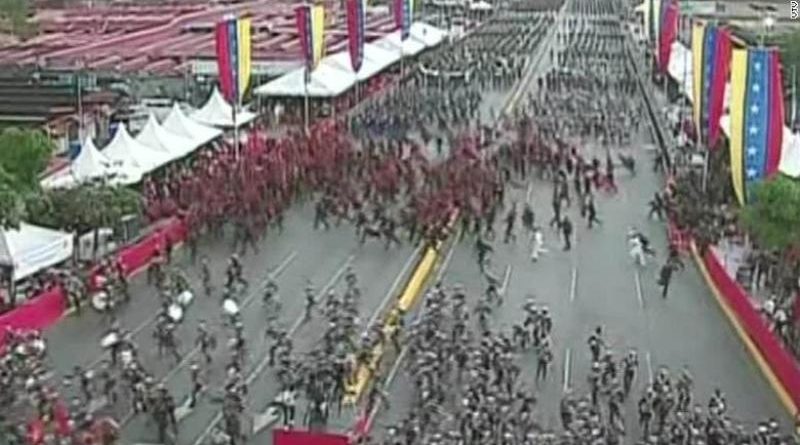 The crowd at the parade in Caracas disperses after what officials called an attack on the President.
The National Democratic Front of the Philippines (NDFP) vigorously condemns the terrorist attack against President Nicolas Maduro and the Venezuelan people. This assassination attempt took place during the 81st anniversary of the Bolivarian National Guard on August 4, 2018 in Caracas. Two drones with explosives were detonated near the podium where President Maduro was speaking.

This assasination attempt follows threats of military intervention by US President Donald Trump and his acts of economic sabotage, seconded by his puppets. This latest extreme violation of the sovereignty of the Bolivarian Republic of Venezuela deserves the strongest condemnation. The heroic Venezuelan people will surely stand with President Maduro.

The Maduro government, following the legacy of Comandante Hugo Chavez Frias, has been serving the Venezuelan people through fundamental social reforms beneficial to the people. It has built more than two million homes for the poor. It has strengthened the homes of hundreds of thousands of people living in the hills. It provides food at affordable prices to the millions of Venezuelans who struggle against economic sabotage by US imperialism. Free and efficient medical care is available to the people.

The Filipino people who are carrying out a 50 year old revolutionary struggle against US imperialism and local reactionaries stand in firm solidarity with the heroic Venezuelan people and President Nicolas Maduro.

The undying inspiration and legacy of the Great Liberator, Simon Bolivar, and Comandante Hugo Chavez Frias lives on in President Nicolas Maduro and the Venezuelan people.

Long live President Nicolas Maduro and the Venezuelan people!
Long live the Bolivarian Republic of Venezuela!
Down with US imperialism and its puppets in Latin America, the Philippines and elsewhere!