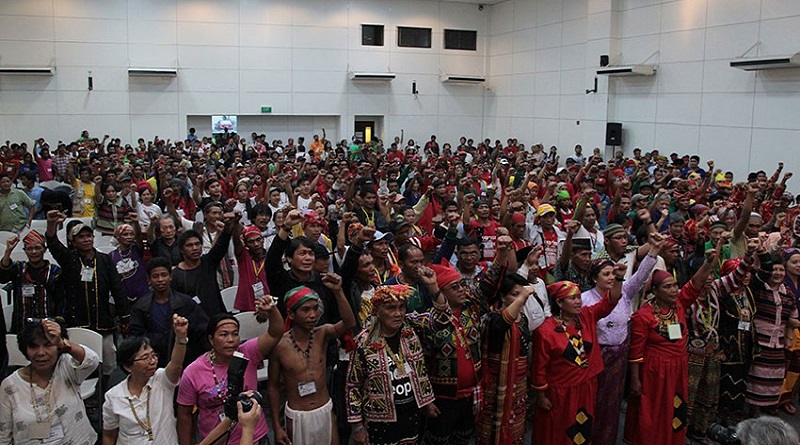 Travelling from the mountains of Cordillera, Sierra Madre and Pantaron range and different parts of Luzon, Visayas and Mindanao, indigenous peoples and Moro converge for the first time to form an alliance called Sandugo, a movement to advance the right to self-determination.

Around 3,000 Moro and Lumad people from Mindanao; Cordillera people, Aggay, Kalinga and various groups from Northern Luzon; Aeta from Central Luzon; Dumagat, Mangyan and Palawan hill tribes from Southern Tagalog; and the Tumandok and Ati from the Panay region in the Visayas travelled to Metro Manila for a historic gathering dubbed as“Lakbayan ng Pambansang Minorya para sa Sariling Pagpapasya at Makatarungang Kapayapaan.”

“This assembly will be carved in history. From the scattered struggle of the indigenous peoples, to the regional level and now we have taken our struggle for self-determination to a national level,” said Dulphing Ogan a Blaan and Secretary General of Kalumaran, a Mindanao-wide alliance of Lumad, in a speech during the formation of Sandugo.

Ogan said that the indigenous peoples and Moro have been at the forefront of the struggle to defend their ancestral lands which prevented the plunder of the remaining natural resources of the country.

“The result of the assembly will be a stronger national minority, strengthened alliance between tribes, with supporters and the international community,” Ogan added.

In a speech during Sandugo’s launch, Joanna Carino, an Ibaloi from the Cordillera, also a convener of Sandugo, shared her memories of the struggle for self-determination started 45 years ago.

Carino recalled that when news of the Jabidah massacre and the formation of the Moro National Liberation Front (MNLF) reached them, it stirred the interest of student activists in Baguio on the issue of national minorities and self-determination.

“The Kabataang Makabayan Baguio even called for a workshop on the issue of national minorities and invited Nur Misuari of the MNLF, but he was not able to come, Abu Bakr came instead,” said Carino.

Carino recollected that Baguio activists then had no concept of a national minority and self-determination but was only guided by the short entry in Amado Guerrero’s Philippine Society and Revolution book. According to her, the book recognizes the national minorities as a special group in Philippine society who are victims of colonialism and oppression and that their rights to self-determination should be recognized.

“I remembered that there was a difference of opinion in the form of self-determination. The option from the Cordilleras is regional autonomy under national democracy while the MNLF’s option is a cessation or establishing a separate Bangsamoro,” Carino recalled.

In 1976, the MNLF signed the Tripoli Agreement, which defined the autonomous administrative divisions for the Moro in the Southern Philippines, its autonomous government, judicial system, economy and ceasefire. During President Corazon Aquino’s administration, the Autonomous Region of Muslim Mindanao (ARMM), through Republic Act 6734 of 1989 which derives its mandate from the 1987 Philippine Constitution.

However, according to Amirah Lidasan of Suara Bangsamoro, also from the Iranun tribe, ARMM is no different to the existing national government and its rotten system.

“If in the national government, those who get elected are the people with money and has political dynasties, it is the same in the ARMM,” lamented Lidasan.

According to Lidasan, there is no real autonomy in what the government has created and the ARMM is not effective because it does not mirror the needs of the Moro people.

Lidasan expressed that the concept of the right to self-determination, whom many of her Moro brothers and sisters sacrificed their lives in the struggle, was only experimented upon by past administrations.

However, Carino clarified that the national minorities’ struggle for ancestral domain and self-determination is not a separate struggle from the rest of the Filipino people.

“As part of the Philippine nation, we are part of the struggle of the Filipino people for genuine freedom and democracy and assert self-determination against imperialism,” said Carino.

Lidasan revealed that they are optimistic with the ongoing peace talks between the GRP and the National Democratic Front of the Philippines (NDFP).

“We are hopeful that the GRP-NDFP will discuss the agenda of the national minorities in the peace talks, especially about the protection of our ancestral lands and economic development through genuine land reform and national industrialization,” said Lidasan.

Sandugo, was formally launched last October 14-15 at the GT-Toyota Asian Center in UP Diliman.

The Lakbayan ng Pambansang Minorya delegation from the North and Central Luzon arrived on October 12 while those from Mindanao, Visayas and Southern Tagalog arrived on October 13. They are  currently hosted by the University of the Philippines Diliman community. They will be staying there until October 21.