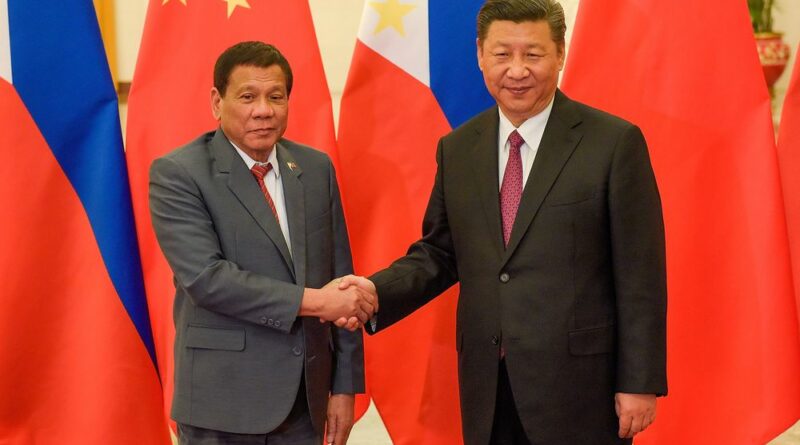 President Rodrigo Duterte is a coward and traitor to the Filipino people as he is sickeningly subservient and loyal to his Chinese imperialist boss.

The bully and macho Duterte has surrendered and conceded to China the sovereign and maritime rights of the country over the West Philippine Sea. Despite negative public reactions, he continues to take a treasonous stance on China’s blatant military incursion and economic plunder of our natural resources within the Philippines’ EEZ.

While Duterte is rough, profane and the No.1 Bully of his fellow Filipinos, he is generously kind, considerate and ”hospitable” to the Chinese imperialist bully. Napakabastos at pinagmumumura niya ang kapwa Pilipino pero para sa Tsina napakagalang at nag-uumapaw ang respeto. He ordered the murder of more than 33,000 poor people indiscriminately listed as “drug suspects”. He now employs the same “tokhang-style” assassinations, illegal arrests and detention on activists, members of the opposition and those red-tagged as “communists” or “communist supporters”.

It was Duterte who fast-tracked the spread of the pandemic in the country by welcoming the entry of more than 500,000 Chinese gamblers and nationals from January to March last year. Until now, he continues to refuse the allotment of funds for mass testing, medical care and ample economic assistance for the people. Instead, he has used the pandemic to further corrupt public funds.

Duterte has also used the pandemic as an opportunity to incur more huge loans from China. He has imposed on the Filipino people a record-high tax burden of Php10.33 trillion. Yet, he has the kapal ng mukha to chastise the Filipino people as “walang utang na loob” to imperial China for allegedly preferring other vaccines over the Chinese-manufactured vaccines at the expense of our sovereignty.

He publicly reprimanded DFA Sec. Locsin’s emphatic remarks yet he hailed praise for DOH Sec. Duque who botched the punctual procurement and delivery of vaccines to favor anomalous deals with China. True to his cowardice, he arrogantly challenged former SC Associate Justice Carpio to a public debate only to shrink back with his tail between his legs.

By bowing to his Chinese imperial boss, Duterte has completely stripped all nationalist and patriotic pretense. He had further exposed his personal and class interests. In exchange for promised public loans and private shady deals, he has allowed China’s reclamation of the West Philippine Sea and the building of its military facilities within the country’s territorial seas.

Duterte may be China’s most reliable minion but to the Filipino people he is the biggest traitor for admitting defeat even before putting up a fight. Sino ngayon ang walang utang na loob at nakakahiya? Hindi ba’t mas nakakahiya ang isang presidenteng duwag at traydor sa kanyang sariling mamamayan at bansa?

Thus, we call on the broad masses of the people to unite for national independence, genuine democracy, social justice and regime and system change. We call on all patriotic soldiers to side with the people by withdrawing support for a traitor Commander-in-Chief. Let us all fight for the removal of this treasonous regime that has betrayed the Filipino people over and over again. Defend national patrimony and sovereignty! Enough of Duterte’s tyranny, cowardice and betrayal!