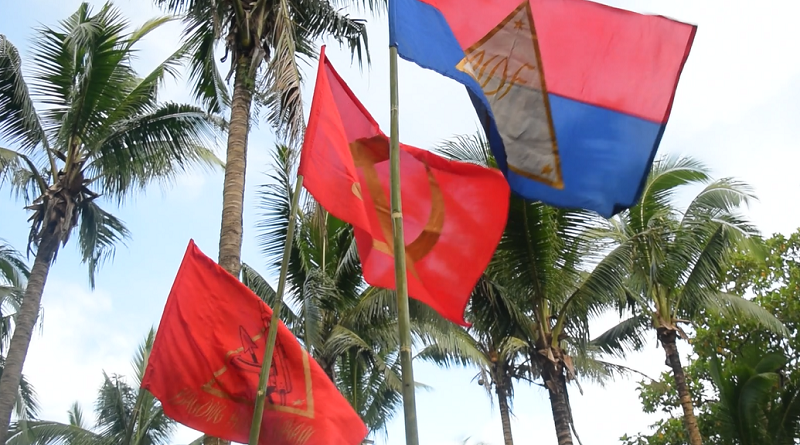 Rodrigo Duterte declared martial law in Mindanao to mount his war of destruction in Marawi, intensify and extend Oplan Kapayapaan and impose his tyrannical and terrorist rule across the country.

In the name of “fighting terrorism,” Duterte bombed Marawi with utter disregard for the lives, property and livelihood of the Meranaws and the city’s other inhabitants. Hundreds of thousands evacuated, more than 1,200 have been killed and not less than 800 are still missing. This is Duterte’s biggest crime against the people under martial law. But this is not his only crime.

Wielding military power, Duterte and his armed minions in the Armed Forces of the Philippines (AFP) have committed a great number of crimes against the Filipino people. Everyday under martial law and Oplan Kapayapaan, hundreds of barangays, especially in the Mindanao hinterlands, are under AFP occupation, surveillance, restriction and oppression; pounded by bombs and artillery and threatened to be the next Marawi.

Mindanao martial law is a war against the toiling masses; an armed oppression of the unarmed people. Hundreds are persecuted and slapped with trumped up charges. Every three days, a new victim of extrajudicial killings by the AFP and its armed minions is added to the growing list. Daily the people suffer the intimidation, threats and assaults by the AFP’s fascist troops.

The imposition of Mindanao martial law is a key component of the US-designed Oplan Kapayapaan war of suppression across the country. The US plays a central role in supporting martial law. In Marawi, US officials, advisers and military troops openly intervened by flying drones and dropping bombs.
With US support, the AFP employs its unrestrained powers in Mindanao to push its anti-people war across the country. By extending Mindanao martial law, the Duterte regime wishes to “normalize” the reactionary state’s use of terrorism and make its miscreance acceptable.

Duterte employs martial law tactics across the entire country. Today, millions live under military rule across the archipelago. Because of Mindanao martial law, AFP troops and officials are emboldened to abuse their power, abuse human rights and suppress the democratic mass struggles.

Duterte uses Mindanao martial law to intimidate the Filipino people and show that nothing can impede his power. It is a key part of his tyrannical and terrorist rule across the country.

Recently, Duterte ousted the chief justice of the Supreme Court who he declared his enemy. Duterte used a questionable legal maneuver (quo warranto instead of impeachment), although the real force behind it was his tyrannical power. This is also the force behind efforts to fully control the Senate in order to make it acquiesce to his charter change scheme to perpetuate himself in power in the form of a transition to a federal form of government.

The revolutionary armed struggle must be assiduously waged as the main form of resistance against fascist rule. Because of Duterte’s armed suppression, the necessity of taking up arms to defend against fascism and advance the people’s revolutionary cause becomes ever clearer.

With tyrannical and terrorist measures, Duterte is running roughshod and aggravating a growing number of people. The people’s anger is ever seething. The basic sectors’ resistance against the fascist Duterte and AFP as they advance their democratic cause is growing. The ranks of organizations, parties, institutions and personalities calling for his ouster from power is swelling.

The anti-Duterte united front must be further expanded nationwide and strengthened. This mainly rests on the breadth and strength of the basic democratic sectors. Thus, it should give all-out support to the anti-fascist struggles of the toiling masses in order to clamor for justice against all of the AFP’s fascist crimes, expose and oppose the abuses of human rights and support the widespread uprising against Duterte’s terrorism and tyranny.

Ang Bayan
Communist Party of the Philippines
23 May 2018